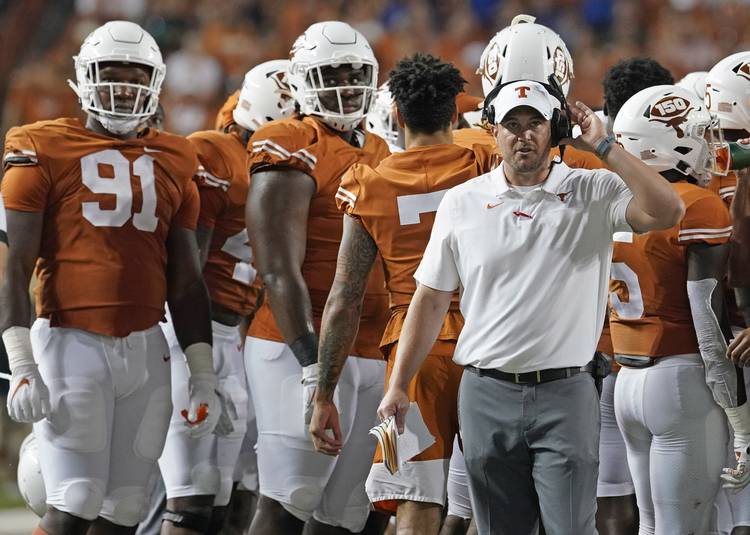 The Texas football program has suffered losses in two of its last three games, and not just on the field. Tom Herman’s program is now 5-3 after Saturday’s road loss at TCU, and a last-second field goal over Kansas is the only thing separating the Longhorns from a three-game losing streak.

Herman sold hope on the recruiting trail in his first two full cycles. The Longhorns ended up signing consecutive top-three classes. The 2020 class was at 20 members before the Kansas game. Since, the Longhorns lost pledges from four-star defenders Princely Umanmielen and Joshua Eaton. Freshman offensive lineman Javonne Shepherd, a four-star from the 2019 class, is in the transfer portal.

The sky might not be falling, but it is definitely on wobbly legs. The coaching staff is now focused on two things: Righting the ship on the field and retaining as much recruiting momentum as possible. Texas’ 2020 class still ranks fifth in the nation and first in the Big 12.

Commitments and targets around the state suggest Texas fans not push the panic button.

“I’m going to Texas to help,” said four-star safety Xavion Alford. “Secondary is a place that Texas needs help. I still hear from schools, but I’ve cut all ties. There were rumors going around that I was open, but I’m a Texas Longhorn. I just don’t text back.”

“We need to get it back together, which I know we will,” Harris said. “The win-loss record doesn’t matter much to me because I know things can change before I’m there in two years. I just want to see how the team comes together during hard times.”

James Brockermeyer, a three-star center for 2021, shared similar thoughts on the current struggles.

“Texas will get it going in the right direction. There’s a lot of room to improve in every aspect,” Brockermeyer said. “The wins and losses aren’t the most important thing in recruiting because we’ll play on different teams with a different group of players, but it is definitely a plus if a school is winning rather than losing.”

The top defensive lineman in the 2021 class is Tunmise Adeleye of Katy Tompkins. He plays with Jalen Milroe, who is Texas’ quarterback commitment in that cycle. The Longhorns are clearly struggling defensively and could use stars on the line to help create pressure and penetration against the run.

“Texas is struggling this year and I attribute most of it to injuries. Hopefully, everyone can get healthy this offseason and coach (Todd) Orlando can fix the things going wrong defensively,” Adeleye said. “For me, consistency is the key. I want to be at a program that has a pedigree of competing for conference championships.”

Fixing the problems on the field should patch any problems on the recruiting trail. Texas remains Texas in the eyes of young players across the state. The Longhorns recruited well even in the darkest periods of the Charlie Strong era. The Longhorns signed the third-best class in the nation in 2018 coming off a 7-6 record.

“Growing up and playing football Texas, who doesn’t want to be a Longhorn?” Alford asked. “It’s the Texas pride.”