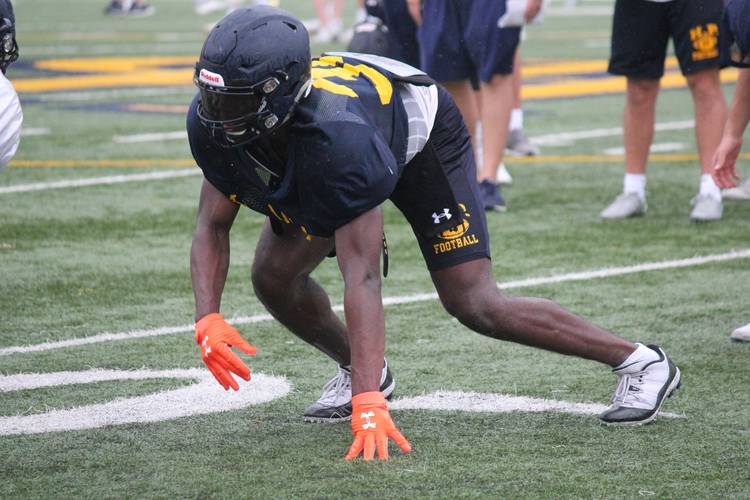 The first wave of Texas commitments for the 2020 class were offensive prospects, including quarterback Hudson Card and a trio of offensive linemen led by Jaylen Garth. The class has evened out over time with the Longhorns looting the state’s top defensive prospects over the past two months. In that span, Texas’ class moved to sixth in the nation and best in the Big 12.

We looked at Texas’ nine offensive pledges on Tuesday. Here’s how we rank the eight defensive commitments heading into their senior seasons: .

Scouting report: Broughton is a man-child. He’s grown into a true defensive tackle while retaining the athleticism that made him a high-end end prospect early in the cycle. He’s the highest-rated defensive lineman to pledge to Texas in the Tom Herman era. The scary part is his best football is well ahead of him because he picked up the sport late in his life.

Scouting report: Alford is the newest addition on the defensive side of the ball. He’s a versatile ballhawk who helped lead Shadow Creek to the Class 5A Division I state championship game in the program’s first year of varsity football. Alford can play corner, safety or nickel. And like Broughton, he picked Texas over Texas A&M. Alford recorded 61 tackles and six interceptions as a junior, returning one for a touchdown.

Scouting report: Dorbah is the state’s best pass rusher. He plays defensive end at Highland Park, the winningest program in Texas high school football and the three-time defending Class 5A Division I state champions. Dorbah was a force the past two years, recording a combined 176 tackles, including 58 for loss, and 30 sacks. He’ll move to B-backer at Texas much like the transition being made by current starter Joseph Ossai.

Scouting report: Texas isn’t relying on as much out-of-state talent, with only three out-of-state commitments compared to the 10 out-of-staters the Longhorns signed in the 2019 class. Those two pledges are potential stars, however, with five-star running back Bijan Robinson (Arizona) on offense and Pouncey (Florida) at cornerback. Pouncey is a long, lean corner with speed and a knack for breaking on the ball. He recorded 21 pass breakups and eight interceptions as a junior, returning three for touchdowns. His older brother, Jordan, is a wide receiver at Texas.

Scouting report: The local prospect shocked most of the recruiting world by choosing to stay home and play for the Longhorns. He was always high on Texas, but maintained throughout the process that he preferred a four-man front. But Texas spends half of its snaps in an odd-man front, forcing Umanmielen to play closer to center than he’d prefer. Still, the Longhorns played the local card and showed the impact that Charles Omenihu made at the 4i position. Umanmielen is the perfect fit considering he’s not built like a traditional end or tackle. He’s a big, athletic player with a high motor.

Scouting report: Thompson is the next East Texas safety hoping to make his name at Texas like Brandon Jones is currently doing. He’s a high-football IQ safety with a nose for the ball. He’s physical enough to play in the box and speedy enough to play deep safety. Like B.J. Foster, Thompson’s physicality and ability to blitz the quarterback could translate into a future at nickel back. Thompson was the defensive MVP of District 8-5A Division I as a junior.

Scouting report: Crawford is a physical corner with track speed. He expects to reach the Class 6A state championships in the 100-meter dash as a senior. He’s also a good football player who doesn’t shy from contact after years of playing running back. He’s a compact player who should blossom at cornerback once he concentrates full-time on football.

Scouting report: Fillinger could become a four-star prospect by the end of the cycle. The fact that he’s at the bottom of this list speaks more to the quality of talent put together by the coaching staff than it does of his abilities. Remember, T’Vondre Sweat was considered a three-star in the 2019 class and reports suggest he’s already making an impact in practices as a freshman. Fillinger will be tasked with the 4i position, picking Texas over Oregon to avoid playing defensive tackle. I was in Utah last week to watch his opener and Fillinger passed every test.

Our annual Big 12 of the Big 12: The conference’s best dozen players, regardless of position