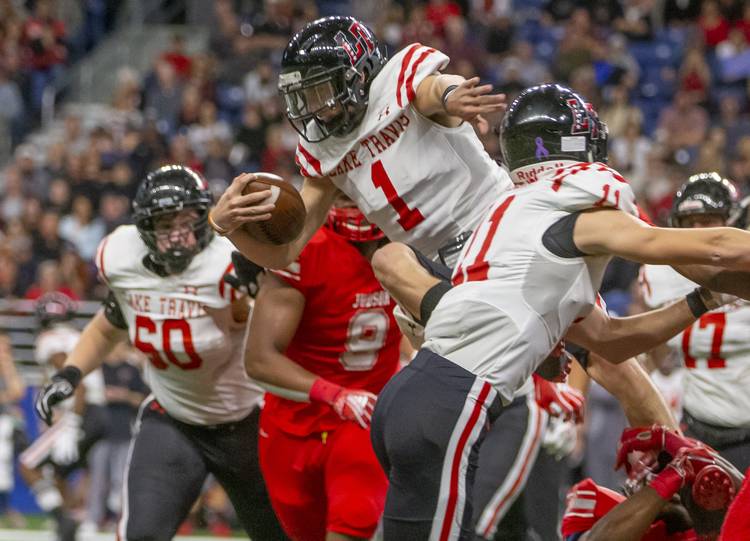 Texas’ 2020 recruiting class consists of 17 prospects and ranks sixth in the nation. It’s the top-ranked class in the Big 12. That wasn’t true in July as the Longhorns struggled to gain commitments while rivals like Oklahoma and Texas A&M sprinted toward the early signing period. Tom Herman decided to run the marathon and the gamble paid off for the Longhorns in July and August.

Scouting report: Robinson is the top-ranked prospect of Texas’ class and it isn’t relatively close. Robinson is the 18th-ranked player in the country. Texas’ next best prospect ranks in the 60s. Robinson is a legitimate five-star who has rushed for more than 2,000 yards in each of the past two seasons. His combination of size, power and balance is rare, and he’s fast enough to score on any carry. Robinson will be the highest-rated offensive recruit to sign with Texas in the Herman era.

Scouting report: Jackson is the 67th-ranked prospect in the 2020 class and its third-ranked athlete. He led Duncanville to the Class 6A Division I state championship game. He passed for 1,580 yards and 15 touchdowns to just three interceptions, while adding 1,497 rushing yards and 23 rushing touchdowns. He wants to play quarterback in college and he’ll get a shot to compete with a talented group of players to take the reins from Sam Ehlinger.

Scouting report: Card ranks just one spot below Jackson in 247Sports’ composite rankings. He spent his sophomore year playing wide receiver before taking over at quarterback as a junior. Card impressed throughout the season, proving capable as a passer and athletic when tasked with rushing the football. He backed up a great junior campaign by dominating camps like the Elite 11. Card is the third-ranked dual-threat quarterback in the 2020 class.

Scouting reports: Johnston is the newest member of Texas’ class. He has shot up the rankings as his skills were put on display at college camps throughout the summer. He’s a ridiculously athletic receiver with the ideal length to thrive in Texas’ offense. He was a first-team all-district selection as a junior while catching the football from current Texas tight end Jared Wiley.

Scouting report: Garth is the highest-upside prospect in Texas’ four-man offensive line class. He’s a big, athletic player who continues to transform his body with added strength in the weight room. He blocked for UT quarterback Roschon Johnson last year and decided early to follow his former teammate to Texas. Garth plays tackle in high school, and while he is capable of playing right tackle in college, his long-term position might be at guard.

Scouting report: Parr is an interior offensive line prospect who’s a hard-nosed player with a strong love of football. He will move inside at Texas because he lacks the height and length to play tackle. That doesn’t diminish his potential to make an impact, though. He’s a technician with the work ethic to become a multiple-year starter.

Scouting report: Majors is similar to Parr. He’s an offensive tackle in high school who is projected to move inside once he arrives in Austin. Recruiting services are ranking him as a center, though it is unclear whether Parr or Majors is Texas’ designated center of the future. While Parr utilizes technique as the foundation of his game, Majors is a bully who overpowers opponents at the point of attack.

Scouting report: Hullaby is an interesting prospect. He played running back as a junior, rushing for 1,181 yards and 11 touchdowns while adding 33 catches for 392 yards and five touchdowns. That versatility made him a coveted target for the Longhorns. The staff likes him as a potential tight end and H-back who can serve as a short-yardage option.

Scouting report: It’s hard to project Karic because he’s not close to a finished prospect. The tools are there for him to grow into a late-blooming tackle like Samuel Cosmi and Connor Williams. The former defensive end is undergoing a body transformation to play tackle in college. He’s a freakish athlete for a kid his size, but he’ll need time to add weight and adjust to life closer to 300 pounds. Karic could be this class’ hidden gym after a year or two working with Yancy McKnight.

Pick Six: Our national college football preview, from the contenders to pretenders