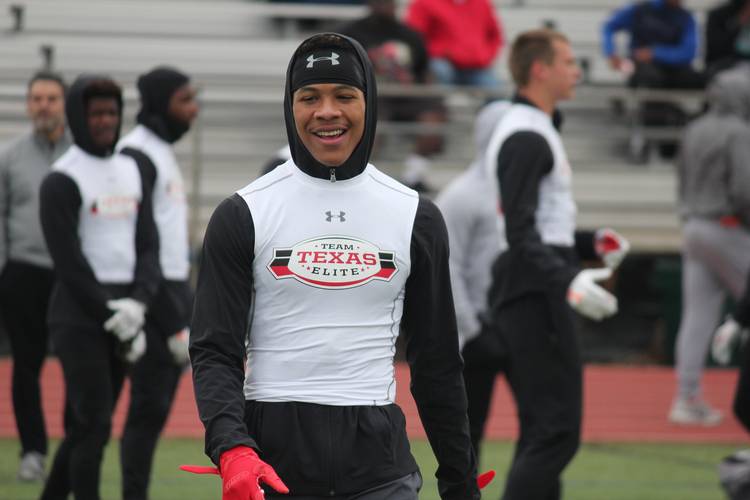 A total of 25 Texans are expected to participate at The Opening Finals in Frisco beginning on Saturday. The four-day showcase for the nation’s top recruits is full of Texas flavor in its first year hosted by the Lone Star State. It was previously hosted at the Nike facility in Oregon. Ten of those 25 Texans play defense. Only 14 Texans made The Opening Final in 2017

All 10 are members of the 2019 Fabulous 55. Half of them are cornerbacks. Three are safeties. Two linemen — NaNa Osafo-Mensah and Marcus Stripling — were invited, while outside linebacker Marcel Brooks was the lone linebacker. Fifteen offensive players from the state earned an invite.

The Longhorns are in the mix for several of the prospects, but not a single current in-state commit was invited to the finals. The only Texas commit attending is California outside linebacker De’Gabriel Floyd. Georgia defensive back Kenyatta Watson II was invited but can’t attend — he underwent a shoulder scope in May. The Longhorns have 10 commitments in the 2019 class.

Here are the 10 defensive players from Texas who’ll be in Frisco:

Banks chose to return home to Louisiana when he picked LSU over Texas and Texas A&M. He’s the best cover corner in the state. He isn’t the fastest cornerback, nor the strongest, which is why his testing numbers don’t match up with some of the other elite defensive backs in the state. He’s patient in coverage and does a great job breaking on the ball. He’s a high-technique player with confidence and length.

Beason made his name as a wide receiver as a junior. He’s transitioned to defensive back because of his height and it brought him offers from some major programs across the nation. He shocked the state when he picked Illinois, following former Bishop Dunne teammate Calvin Avery from the 2018 class. Beason is a confident young player who is known as a trash talker. He’s an elite athlete who is starting to become a technician at cornerback.

Brooks could be the state’s top athlete. He moves incredibly well for his size. Brooks, much like DeMarvion Overshown from the 2018 class, is a big-bodied linebacker who possesses the speed to play safety. He’s excellent in space and can also thrive as a pass-rush specialist because of his athleticism. He’s the best outside linebacker in the state in a year devoid of real linebacker prospects.

Carter earned headlines recently when he announced a move from state-power Aledo to Mansfield Legacy. That’s put him back in Texas’ recruiting sights with teammates Jalen Catalon and Taurean Carter already high-priority targets for the Longhorns. Carter is an athletic freak with more upside than any other cornerback in the state because of his combination of size, length and speed.

Osafo-Mensah picked Notre Dame over Texas in the spring. The state’s top pass rusher will represent TAPPS at The Opening. He’s one of three private school defenders from Texas expected in Frisco, joining Bishop Dunne teammates Brian Williams and Beason. Osafo-Mensah is a big, athletic defender with a future at either defensive end or outside linebacker depending on how big he gets in college.

Richardson is a big, physical safety who has shown the ability to cover the state’s best wide receivers and tight ends. He excels as a run-stopper, which isn’t the skill that is highlighted at camps like The Opening due to no pads. The Texas A&M commit is a student of the game who has great footwork and a high football IQ. He’s a hard hitter who should transition well into SEC football, as he reminds many scouts of 2018 signee Leon O’Neal.

Stripling joins Osafo-Mensah as the lone defensive linemen invited to The Opening from Texas. He’s a true defensive lineman with an opportunity to play end or tackle depending on the type of scheme employed by the school of his choosing. He’s big, strong and moves well for his size. Stripling also can add 20 to 30 pounds to his frame once in college and transition to a three-technique defensive tackle.

The top safety in the state surprised many when he ended his commitment early and picked Texas A&M. Williams is a long, athletic safety who can cover as well as any cornerback and hits as hard as most linebackers. He’ll enter his senior season as a three-year starter. Williams gets his chance to prove himself among the best of the best at The Opening.

Wolfe will announce his commitment right before the start of The Opening and the leaders are Texas A&M and Arkansas. He’s a big, long cornerback who uses his long arms and big frame to bully receivers at the line of scrimmage. He’s fast enough to keep up with elite receivers once routes develop. He’s a two-time all-district honoree with 29 offers.

Young is a big, athletic defensive back who plays cornerback and safety. His big frame suggests an eventual move to safety, but he’s listed as a cornerback. Texas A&M and USC are the leaders with Young expected to announce on July 4. He’s close with Wolfe and it’s likely that the two pick the same school. Young is a two-time first-team all-district honoree.