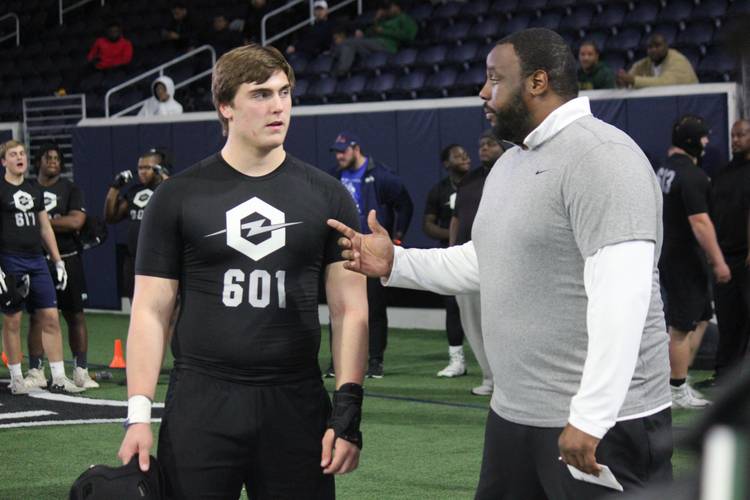 The state is stocked with big fish in the 2021 recruiting class along the offensive line. Texas holds a commitment from one of the state’s six four-star tackles in Katy Taylor’s Hayden Conner. Ohio State took four-star guard Donovan Jackson off the board on Wednesday.

The perfect offensive line class for the Longhorns would  include five signatures by the end of the early signing period. With one down in Conner, the focus shifts toward the other top players in the state, including the Brockermeyer twins. Tommy is a five-star tackle prospect. James is a four-star center.

They’re the sons of former UT great Blake Brockermeyer. The family was in San Antonio to watch older brother Luke and the Longhorns beat Utah in the Alamo Bowl. Texas is clearly among the group of leaders because of the family ties, but the twins contend that Austin isn’t necessarily a lock to be their next home.

“We’re treating Texas like every other school,” James Brockermeyer said. “They’re one of our top schools, but it is an individual decision and we’re going to look at each of our possibilities before making a decision.”

Brockermeyer says that decision should come in the summer if everything goes as planned. Tommy Brockermeyer echoed those sentiments and said there is a slight possibility that the twins end up at different schools if one program was a better fit than it would be for the other.

“This is a huge decision for us,” he said. “Of course, we want to go to the same school, but we’re open to the best opportunities.”

The two attend All Saints Episcopal in Fort Worth. Impressive showings on the camp circuit before their junior seasons earned them invitations to the Future 50 Camp in Orlando, a showcase for the top juniors in the country. James looked great against the top competition. Tommy is still recovering from shoulder surgery that cost him his junior season.

“Not playing as a junior was hard,” he admitted. “I’m excited to get back out there when I cleared for contact.”

The recruiting process is a struggle. Coaches, family and fans pull you in numerous directions. The good news for the twins is that they have each other, and come from a family that understands the process. Blake Brockermeyer is an assistant coach at SMU.

“Our dad is a college coach, so he can help us sift through the good and bad during the process,” Tommy said. “Then, to have a brother who I can bounce stuff off of when I’m thinking about it helps. We can compare notes after visits and that helps not get swept up in the excitement of a visit.”

James’ criteria for a college is simple: “I want a school with a coaching staff I connect with, a good offensive line and a quality strength and conditioning coordinator,” he said.

Texas’ ideal class would include the Brockermeyers, Conner, four-star tackle Savion Byrd of Duncanville and four-star guard Bryce Foster. The Longhorns hold advantages with Byrd and Foster. Byrd is a teammate and good friend of 2020 UT signee Ja’Quinden Jackson. Foster plays next to Connor on the Katy Taylor line.

The full focus of the UT staff switches to the 2021 class once national signing day passes in February. Building an elite offensive line class is the top priority in a cycle built for a five-man group of prospects. Even the players understand how special this group is.

“It’s been great being part of a class known for its offensive line play,” James Brockermeyer said. “It gives us all something to strive towards. We go to these camps and get a good barometer of where we are as prospects. We’re all young and can learn from each other.”