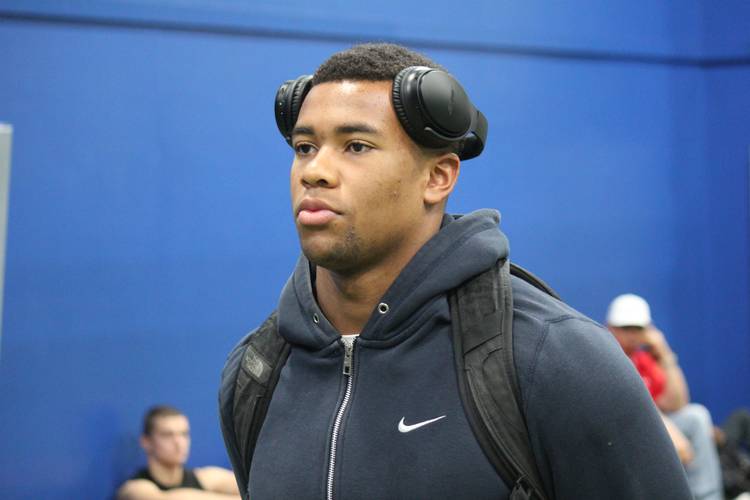 Texas is off to a fast start in the 2020 class. The Longhorns hold five commitments, with four hailing from the Lone Star State. Tom Herman’s program needs to win the state to land another top-three national class for the third consecutive year. Texas relied heavily on out-of-state targets in the 2019 cycle. Here are 10 in-state prospects Texas needs to land in 2020:

The state’s top prospect is the big fish in the 2020 class for Texas, especially since the Longhorns missed on top targets like Noah Cain and Trey Sanders in 2019. Evans is considered the best running back in the nation with elite size and track speed. He’s a rare talent with offers from nearly every program in the country.

Jackson is the quarterback at Duncanville, but it’s unclear what position he’ll play at the college level. He could be a dual-threat quarterback who relies on the power running game. He can play wide receiver like he does for 7-on-7 teams. He can play linebacker because of his frame and athleticism. Texas wants to splash in the DFW area in this cycle and Jackson is the top prospect in the city.

Herman thrives in Houston on the recruiting trail. Omeire is an elite wide receiver who can play outside. He’s a freak athlete who’s still figuring out how to play the position. The raw athleticism, speed and tall frame make him a potential star. With Demond Demas committed to Texas A&M, Omeire is an important prospect for Texas to land.

Texas missed on the best defensive lineman in the state in 2019 when Texas A&M landed DeMarvin Leal from Converse Judson. Broughton is a Leal clone. He’s big enough to play tackle and athletic enough to play on the edge in an odd-man front like Texas deploys. Broughton is high on the Longhorns early and a perfect scheme fit.

Lindberg is the best offensive lineman in Texas and good friends with current UT offensive line commits Logan Parr, Jake Majors and Jaylen Garth. Lindberg is another piece of the offensive line puzzle in the 2020 class. He’s big, long and mean. Lindberg can play either tackle position and is a potential All-American level talent.

Collins is a long, quick defensive end with family ties to Texas as his mom, Benita Pollard, played for the UT basketball team. He’s Texas’ to lose considering his location and family background, but it isn’t a slam dunk with Texas A&M making a strong push. Collins is among the best pass rushers in Texas.

Alford can play every position in the secondary and that makes him a valuable recruit. It could wind up an in-state battle between Texas and Texas A&M. Alford plays deep safety in high school and helped Shadow Creek reach a title game in its first season as a varsity program. He went to Texas twice in February with his Fast 7v7 team.

Washington is a long-time target of the Longhorns and a potential star at safety because of his raw speed and size. He’s a fellow Houstonian and lives close to targets from Galena Park North Shore. He’s a rangy safety who can play deep and roam like an outfielder, or he can play Joker as an undersized linebacker like B.J. Foster did as a freshman.

George is important for two reasons. He’s one of the top offensive line targets in the state and he’s teammates with the best player in the state. George isn’t a finished product and still needs to reshape his body and become more sound technically, but he checks all the boxes in terms of potential much like Javonne Shepherd in the 2019 class.

Eaton is among a few cornerbacks who could be placed in this spot alongside prospects like Jalen Kimber, Ryan Watts and Jahari Rogers. Eaton exploded onto the national recruiting scene with nearly a dozen national offers received in the past 30 days. He’s a long, rangy cornerback, which fits what Texas has recruited at the position in the past two cycles.

With No. 2 LSU’s big bats in town, Texas third baseman Ryan Reynolds is rising to the defense

12 big things about Big 12 basketball: We’re in the endgame now