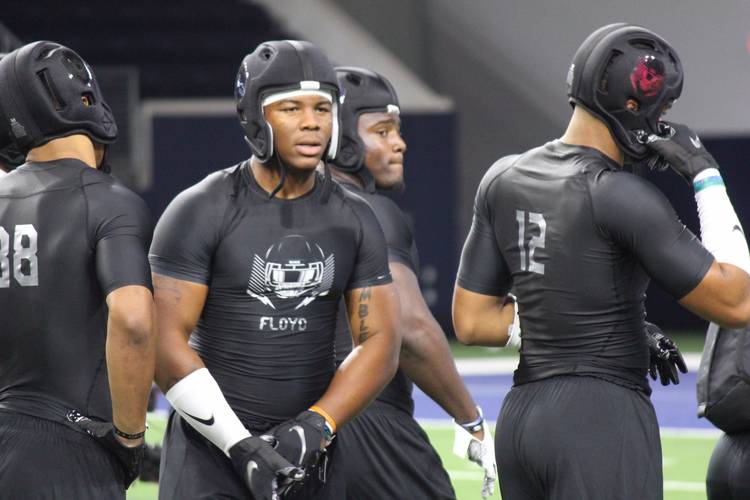 FRISCO — Recruiting doesn’t die, even in a dead period. The Opening Final is built to showcase the best talent from across the nation. A total of 25 Texas high school football players are at the event, including a trio of Austin-based wide receivers with Texas offers. It’s a four-day event filled with old-school combine testing, one-on-one drills, a 7-on-7 tournament and a linemen challenge.

Despite the 25 Texans, the lone UT commitment here  hails from California and he’s using the time in Frisco to bond with, what he hopes, are future teammates. Four-star outside linebacker De’Gabriel Floyd is recruiting the likes of Bru McCoy, Rian Davis, Trey Sanders and Noah Cain.

Texas picked up a commitment from fellow California native Chris Adimora, a close friend of Floyd’s. His defensive targets are Davis and McCoy, both fellow linebacker prospects. McCoy can also play wide receiver, but Floyd wants the out-of-state trio to join forces at linebacker in Todd Orlando’s speed-centric defense.

“I’m getting this class active and we’re ready to do something big,” Floyd said. “I’m telling Rian the same thing I told Chris — all of us together on the same defense would be a problem. I want to be around a bunch of ballers and he is a baller.”

Floyd ran a 4.7 40-yard dash and is set to play Rover wants he arrives at Texas. The Longhorns now hold two commitments from California prospects in the 2019 class. This after signing quarterback Cameron Rising in the 2018 class. Tom Herman has roots in California and he’s using those to lure big fish to the Lone Star State.

“Some kids are interesting on moving to a new state and being on there own and Texas (Austin) is the closest thing to California,” Floyd said. “Texas has a lot of talent in state, so if Texas is coming way out here to show interest in us it shows that they really want us at Texas.”

Noah Cain was a one-time star at Denton Guyer before moving to IMG Academy (Fla.) and sharing a backfield with Trey Sanders. The two 2019 prospects split carries and are considered two of the top four running backs in the entire class. Neither has released a top list or taken official visits, but Texas is a school that is in the mix for both players.

Cain plans to narrow his list to five schools in the coming weeks and then plan his official visits. He’s not planning on making an announcement until national signing day. The Longhorns are among the favorites along with Georgia, LSU and Ohio State. Cain was born in Louisiana and raised in Texas.

“It keeps getting harder as more schools enter the picture and really make a push,” he said. “There are a lot of schools where I could come in and play early, so it is a hard decision.”

If Texas does land Cain, a bulk of the credit will go to assistant coach Stan Drayton and the influence of Herman in Cain’s recruitment.

“Texas is still one of my top schools. Coach Drayton and coach Herman text me all the time,” Cain said. “Herman says I’m on top of their list and that I could come in and play early.”