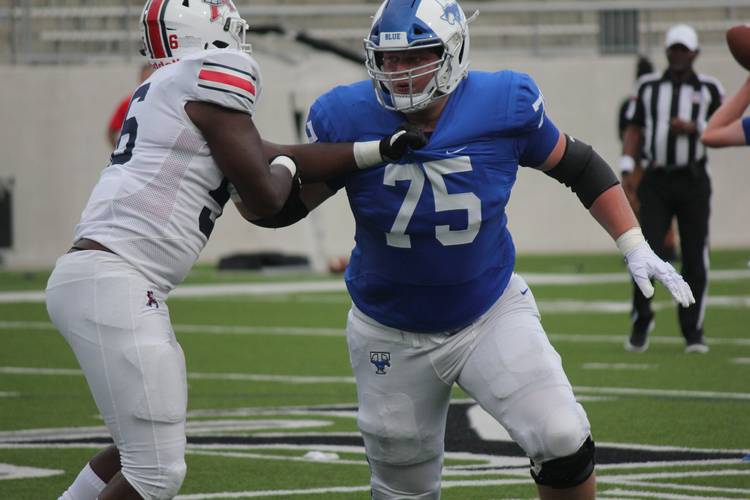 The Dotted Line is focusing on the 2021 Fabulous 55, breaking down the skill set and recruiting situations of each player on the list, continuing with Nos. 35-31:

Morton was a must-get for Texas Tech in the 2021 cycle. Not many four-star quarterbacks grow up in West Texas. The Red Raiders secured the dual-threat prospect’s commitment back in October, feeling the 2021 class could use a headliner to help put together a strong class for head coach Matt Wells. Texas Tech signed an excellent group of wide receivers in 2020 and Morton is the perfect commitment to draw more offensive talent to Lubbock.

He was District 3-3A Division I’s offensive MVP as a sophomore and a junior, while accounting for 5,201 yards passing and 57 total touchdowns. He’s the highest-rated quarterback to pledge to Texas Tech since Patrick Mahomes.

The Oklahoma commit shares an offensive line with Donovan Jackson, an Ohio State pledge who ranks No. 1 on the Fabulous 55. Much like Jackson, Montgomery is a high school tackle whose future may be at guard. He’s a big, strong blocker at the point of attack, but he still needs work in space, which is why a move inside could benefit him. He chose Oklahoma over a host of big-time offers on Jan. 19.

Campbell was a first-team all-district selection as a junior at Pearland. He played his sophomore season at Katy Taylor. Then he moved to Lamar Consolidated at the end of his junior campaign, when he rushed for 883 yards and 19 touchdowns on just 116 carries. He’s also a threat out of the backfield, compiling 26 receptions for 472 yards and five touchdowns in his two years of varsity. Out-of-state programs like Alabama, LSU and Penn State currently lead for the Houston native.

Coffey is arguably the best safety in Texas for the 2021 cycle and his offer list suggests that college coaches throughout the country agree that the speedy, rangy safety is a top priority. Texas is among the teams that have offered Coffey, but its offer was extended by the previous defensive staff. It’s too early to know how new defensive coordinator Chris Ash views the defensive prospects with existing offers in comparison to the former staff. Coffey is a three-year varsity starter with 14 career interceptions.

Conner was a first-team all-district lineman as a sophomore and quickly found himself considered one of the top young offensive line prospects in Texas for a loaded cycle. Conner plays with the mean streak coveted by offensive line coaches. He’s a big, athletic prospect who can stick at right tackle or move to guard. His massive frame and strength provide him with the ability to handle defensive tackles. He’s also agile enough to move to the second level and knock down linebackers. Conner could also play guard in a similar way to current Longhorn Tyler Johnson. His teammate, Bryce Foster, is among Texas’ top offensive line targets. The duo led Katy Taylor to a Class 6A Division II Region III championship as juniors.