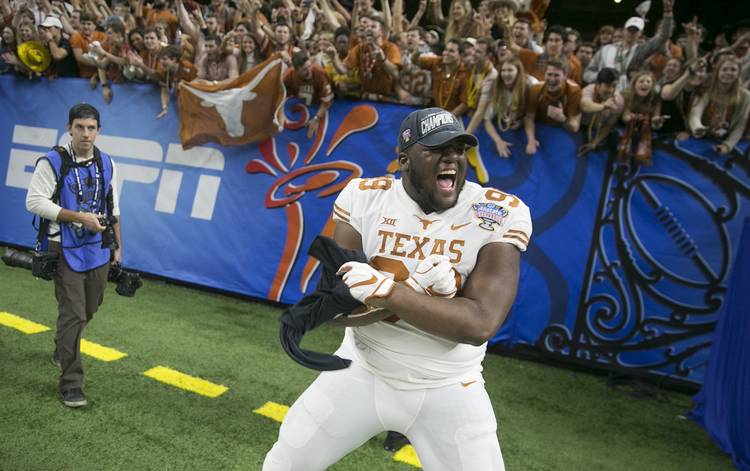 Let’s take a look back at how the 11 defensive starters ranked coming out of high school. We’ll use 247Sports’ composite rankings and previous editions of the Fabulous 55:

Nomadic is the best word to describe Roach’s career at Texas. He pounced onto the scene as a freshman, overliving his bill as a three-star recruit. He recorded eight tackles for loss and three sacks that season. He jumped around positions as Texas experimented with new schemes late in Charlie Strong’s tenure and into Herman’s first year. He’s now fully entrenched at the 4i spot and is poised for a big season.

Coburn wrestled away the starting nose guard spot and the hope is that the former four-star recruit becomes the next Poona Ford. Coburn is a huge presence with surprising athleticism for a man his size. That was true in high school as well. I felt he was a top 10 player in Texas and he’s on his way to fulfilling those expectations.

Graham was a tweener prospect in high school; most of us were unsure whether he’d wind up at defensive end or grow into a tackle. Texas’ move to an odd-man front benefits the body type and skill set of Graham because it allows him to play a hybrid of both defensive line positions.

Ossai became Texas’ best pass rusher over the course of his true freshman season as the high school defensive end slowly made the transition to Texas’ B-backer position. He earned the start against Georgia in the Sugar Bowl win and announced his presence as a future star with a team-high eight tackles.

Prep Rankings: 4 stars; No. 6-ranked inside linebacker, No. 119-ranked overall

Adeoye benefited from the new rule allowing players to play in as many as four games without losing a year of eligibility. The St. Louis native played mostly on special teams at the end of the season. He’ll be expected to patrol the middle of Texas’ defense on early downs and in obvious running situations. Adeoye is a bruiser who must prove that he’s athletic enough to stay on the field against speed.

McCulloch is another senior defender who has spent his time at Texas roaming around different positions. He was the preferred B-backer for most of 2018, but he’ll move inside due to necessity as a senior. The Rover position is the sexy linebacker spot at Texas with Malik Jefferson and Gary Johnson as previous starters. McCulloch started only six games in his previous three years, so it is hard to say that he’s lived up to the billing. He can re-write that perception with an all-conference senior season.

Green was the top-rated cornerback in a loaded 2018 class that included Anthony Cook and D’Shawn Jamison. He’s living up to that billing by separating himself as one of the clear starters on Texas’ defense, according to Herman. Green is a big, long, physical player who didn’t move to cornerback until his sophomore year in high school. He grew up playing quarterback.

Boyce took many by surprise when it was announced that he’d held off Cook and Jamison for one of the starting spots at corner, though Herman made it sound like the reps opposite of Green are still up for grabs. Boyce was an underrated recruit out of Lake Dallas. We ranked him on the Fab 55 despite his three-star status because of his toughness, football IQ and raw athleticism.

Sterns immediately met expectations as a former five-star recruit when he quickly became one of the best safeties in the Big 12, if not the nation. Sterns, a one-time LSU pledge, started all 13 games and earned Big 12 defensive freshman of the year and first-team all-Big 12 honors. He’s a three-year and NFL player.

Jones was a borderline five-star talent because of his combination of size and athletic prowess. His testing numbers in high school were off the charts, as was his ability on the field. When healthy, Jones is a star in Texas’ secondary. He hasn’t lived up to the ranking as the best safety in his class, but he can be an NFL draft pick with a strong senior season.

Foster was my favorite player in the 2018 class, barely beating out Sterns for the top spot on the Fab 55. It was Foster’s pure aggressiveness that separated him from the other players. He’s an alpha male, and he became Texas’ enforcer as the 2018 season took shape. He’ll start at nickel as a sophomore so Texas can use him on blitzes and in run support.

The Eyes of Texas: Four players to watch in Saturday’s Longhorns-Bulldogs game