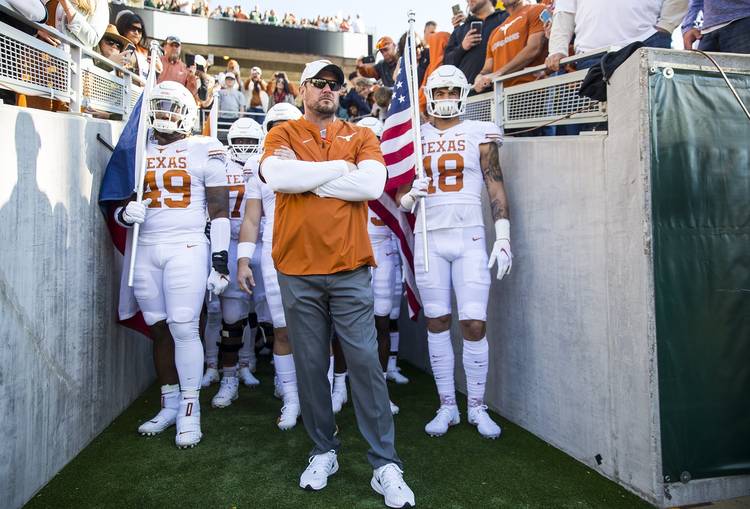 The Big 12 recruiting race is a yearly battle between Texas and Oklahoma. The 2021 cycle is unlikely to be any different, though the Sooners sit in the third spot early. Expect movement over the next few months as top juniors take visits in the spring and college coaches get to high schools with the dead period over. The Longhorns are currently leading with six pledges, including four ranked within the national top 150 on the 247Sports composite rankings.

Texas is off to a strong start with five of the six pledges ranking on our initial Fab 55. Sanders, a two-way star at Denton Ryan, is the best player of the bunch and was recently awarded a fifth star. He’s likely a defensive end in college, but he’s listed as an athlete because of his talent at wide receiver.

Bowman, who is also a two-way starter at Ryan, and Milroe, a dual-threat quarterback from Katy Tompkins, are top-10 in-state prospects who have been committed to Texas since before their junior years.

Head coach Chris Klieman hopes success on the field transitions to better outcomes on the recruiting trail. The Wildcats hold five pledges, including four-star quarterback Rubley from Colorado. The 6-3, 205-pounder threw for nearly 2,000 yards in his past two seasons as a starter. Kansas State’s class currently ranks 12th in the country. The 2020 class finished at 51st.

Two of Oklahoma’s three pledges are from Texas. Jackson is a four-star playmaker from Richmond Foster, which is the same school that produced Oklahoma wide receiver CeeDee Lamb. Jackson caught 122 passes for 2,419 yards and 33 touchdowns in his first two varsity seasons. Downs is a defensive end from Oklahoma while Montgomery is a three-star offensive tackle from Houston Bellaire Episcopal.

Morton is a big get for the Red Raiders. The four-star from Eastland High in West Texas was the District 3-3A Division I offensive MVP as a sophomore and junior. The 6-2, 185-pound athlete is the eighth-ranked dual-threat quarterback in the country and a national top-250 prospect in the nation. He’s accounted for 57 touchdowns over the past two years.

Kansas’ three highest-rated commitments are wide receivers from the Dallas-Fort Worth area, which is understandable considering receivers coach Emmett Jones was a former prep coach in the area. Kansas also holds a commitment from three-star quarterback Ben Easters.

Wickstrom is a tight end prospect from Sweden. That’s how far head coach Neal Brown is willing to go to improve the Mountaineers. West Virginia hopes to improve on a 2020 cycle that finished 37th in the nation.

Matt Rhule didn’t exactly focus on the recruiting trail during his final season at Baylor. The Bears finished the 2020 cycle with the 54th-ranked class in the nation despite playing for a Big 12 title. Former LSU defensive coordinator Dave Aranda knows recruiting must be a focus early in his tenure. His three commitments all live in the Houston area.

The Cyclones dipped into Austin to gain a commitment from Wright, a 6-1, 194-pound three-star quarterback from Austin High. He threw for more than 2,500 yards as a junior and a sophomore. He’s passed for 57 touchdowns in three years of varsity action.

TCU tends to slow-play the recruiting trail. Lemear is a three-star safety from Manor; he’s recently picked up offers from Texas Tech, Kansas and SMU. The Horned Frogs rallied to sign the third-best class in the Big 12 last cycle.