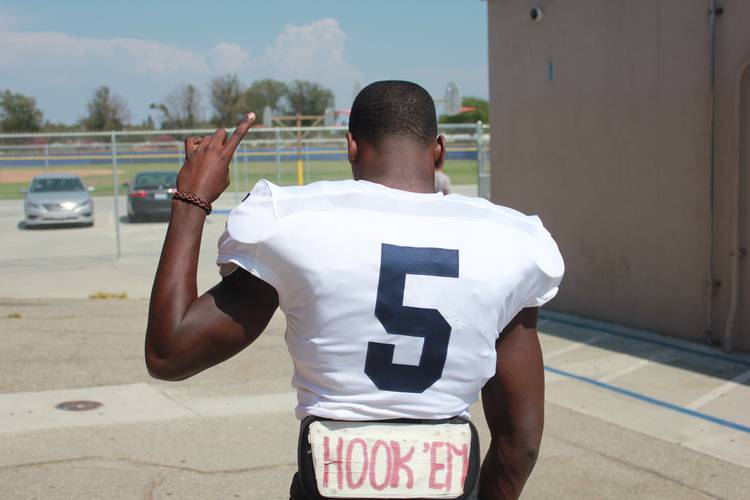 ANAHEIM, Calif. — Chris Adimora, a four-star safety committed to Texas, stared at the herd of fans outside of Royal-Memorial Stadium seven hours before the start of the spring game and knew he had found his kind of people. Adimora breathes football. He’s not here for social media clout or retweets. The Mayfair, Calif. product only cares about football and school.

“He’s old-school in his demeanor,” said Mayfair head coach Derek Bedell. “He doesn’t search out the limelight. The recruiting process, for him, was about the fit. He wanted to be comfortable in the environment in and around the school. It wasn’t just about the biggest football school.”

Adimora was wowed by the devotion of Texas’ fans and the buzz surrounding the program. He traveled to Austin with Mayfair assistant coach Billy Thomas, spending a weekend with the UT coaching staff and the team. The 6-1, 192-pounder is the No. 14-ranked safety in the class and the No. 187-ranked overall prospect in the country, per the 247Sports composite. He held 16 offers.

“Texas is a different vibe before you even get off the plane. Everyone there is all about football,” Adimora said Thursday after a film session.

Mayfair starts its season tonight against Long Beach Wilson, a team that accidentally helped Adimora build his reputation as a junior when the future Longhorn tallied three interceptions, including two returned for touchdowns in the third quarter.

“That put Chris Adimora on the map,” Bedell said. “It also helped build momentum for our season. If you invented a sport tomorrow and gave him the rules, he’d be the best at it in 20 minutes. He’s a competitor. He’s a leader. And he’s a winner.”

Adimora is one of 15 pledges in Texas’ 2019 class, and one of two Californians. His good friend De’Gabriel Floyd, a four-star outside linebacker from Westlake Village, Calif., picked Texas on March 31. Adimora pulled the trigger in July, picking Tom Herman’s program over Boise State.

“De’Gabriel committing was another positive for Texas,” Adimora said. “We’ve been boys before all the recruiting stuff.”

System might be the biggest football-related reason Adimora chose Texas. The Longhorns want to deploy multiple safeties on each play, preferring speed to bulk. Defensive coordinator Todd Orlando watched tape of Adimora during a trip to California. Texas offered after Craig Naivar, the coach in charge of the safeties, watched the film.

Adimora quickly fell in love with the way Orlando and Naivar plan to use him.

“Texas lets you do a variety of stuff as a safety. You can play boundary or come up and blitz, or even play some linebacker,” Adimora said. “I want people to see me as a versatile defender who is a ball-hawk.”

Adimora started his first varsity game as a freshman. He’s steadily sharpened his skills and is ready for his senior season. He registered 71 tackles and seven interceptions as a junior. It’s not the growth of his body or athletic prowess that’s made Adimora a top-flight recruit. He was always big and fast. It was the maturity formed with experience that allowed him to blossom at safety.

“My maturity has improved a lot since my freshman season,” he said. “I’m the old man in the room now, instead of just the kid.”

“He’s a completely different kid than he was a freshman,” he said. “He was shy as a freshman, but he started at safety by the end of his ninth grade season. The administration and teachers here love him. He now understands the game, rather than just relying on his athleticism to play football. He’s become a student of the game, which is what Texas is getting. He pays attention to detail.”