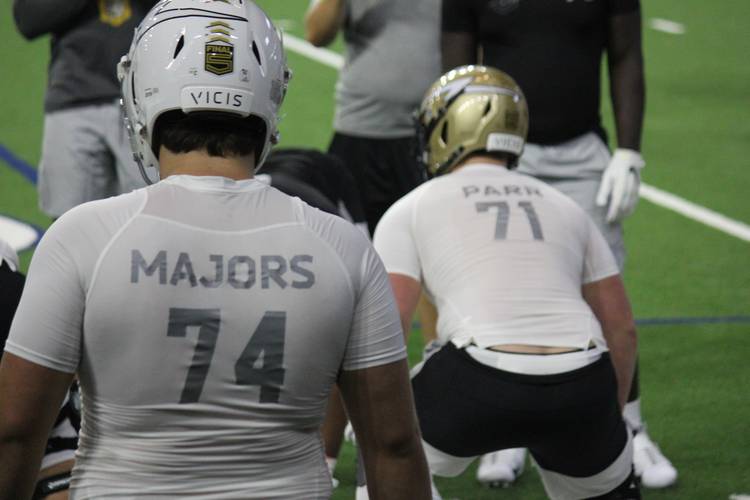 “Hudson (Card) is a really cool guy who I can’t wait to be at Texas with next year,” Parr said. “He’s very laid back and is very humble even though he’s one of, if not the best quarterback in our class.”

Majors echoed those sentiments toward his future quarterback. All three are four-star prospects ranked on the 2020 Fabulous 55. Card ranked among the top performers at the Elite 11 portion of The Opening Finals, which features the best quarterbacks in the country. The 6-2.5, 179-pound Lake Travis product is the second-ranked dual-threat quarterback in the country despite starting just one season of varsity football at the quarterback position. He played wide receiver as a sophomore while he waited behind Matthew Baldwin, who signed with Ohio State in 2018.

“Hudson is just a good guy to be around,” Majors said. “It’s always a good time seeing him and bonding with him over the weekend. We got to check in on each other and watch everyone perform. I love my quarterback.”

A strong bond is building between Parr and Majors. Even their parents are growing close.

“Jake and I have grown really close in the process, and our families are basically best friends,” Parr said. “I’m just happy to have a relationship with someone like that who will be going through the same experiences as me.”

Both offensive line commits play offensive tackle in high school. That’s expected to change in college because neither possess the height and length required to block on the edge against elite defensive ends. Parr is expected to move inside to guard, ranking as the 10th-best guard prospect in 2020. Majors practiced at center during The Opening and is currently considered the fourth-best center prospect in his class despite not playing the position on a regular basis.

“It was definitely a once-in-a-lifetime experience,” Majors said about The Opening. “It was great learning from the coaches and to meet the rest of the offensive linemen considered the best.”

Majors and Parr also used the time in Frisco to recruit some of Texas’ top targets in the 2020 class.

“We had a bit of time to talk to guys like Princely (Umanmielen), Vernon (Broughton), and Donovan Jackson,” Majors said.

Jackson was the only 2021 offensive line prospect from Texas at the event. The 6-4, 308-pound four-star from Houston Bellaire Episcopal impressed to the point of winning the MVP for the offensive line. His technique is beyond his years, reminding many of Humble Atascocita lineman Kenyon Green, who signed with Texas A&M last cycle. Jackson tops our Next 25 list ranking the top juniors in Texas.

“I just wanted to show that I could compete with the older guys and that I was invited for a reason,” Jackson said. “To go up against the best defensive linemen in the country is a great opportunity. I wanted to focus on improving my hand placement.”

It’s still early in the recruiting cycle for Jackson. He did trim his massive offer list down to 12 schools on July 8. The list included Texas and the usual suspects in recruiting like Alabama, Georgia, and Ohio State. Jackson is the only native Texan in a family filled with Ohio natives. He attended Ohio State’s spring game. He plans to visit Stanford in July. Jackson also plans to attend Texas’ game against LSU.

“I’m not worried about dates, but I did want to narrow it down in order to increase my focus,” Jackson said. “Texas stands out because their improvement on the field and the business school.”