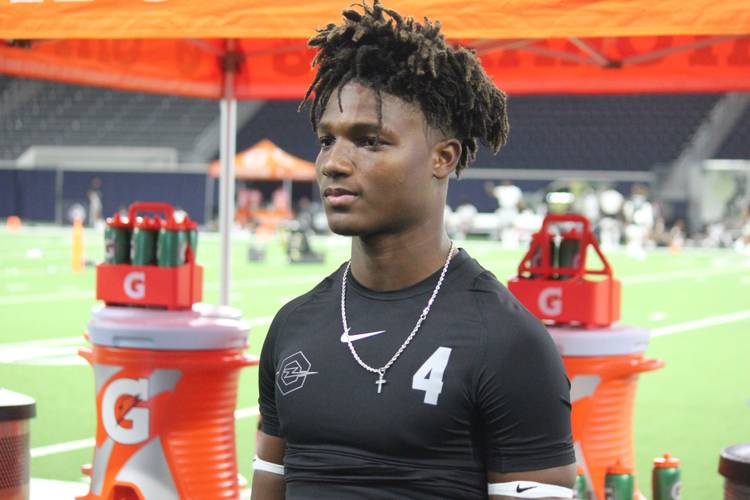 ROSENBERG — Four-star safety Xavion Alford is ready to become a Longhorn. The product of Alvin Shadow Creek pledged to Texas back in a hectic August of recruiting successes. The 6-0, 182-pound prospect is the ninth-ranked safety in the nation and No. 15 on the 2020 Fabulous 55. Texas lost two commitments over the past week, but Alford won’t be joining the exodus.

He still hears from schools, but he has cut all ties, he said.

“There were rumors going around that I was open, but I’m a Texas Longhorn. I just don’t text back,” Alford said last Thursday. “Growing up and playing football in Texas, who doesn’t want to be a Longhorn? It’s the Texas pride. I love the program. The coaches were consistent throughout the entire process. They stayed on me and it showed me that they really wanted me.”

I AM 1000% COMMITTED TO TEXAS. I WILL NOT BE TAKING ANY OTHER VISITS TO ANY OTHER SCHOOLS.#HookEm

Alford credits his relationship with assistant coach Craig Naivar for his commitment.

“I felt most comfortable with coach Naivar. If football wasn’t invented, he’s a guy I’d still be real cool with,” he said. “He’s a great mentor and knows how to communicate to his players.”

Alford is currently sidelined with a knee injury. A ligament in his knee was turned backward and surgery was required to repair the damage. It was a quick, painless operation, Alford said, and he expects to be fully healthy by the time he walks onto campus as an early enrollee in January.

“My knee is getting better. It was a minor setback and I’m about two months removed from surgery, so each day I’m getting stronger and faster. I’ll be back soon,” Alford insisted. “It’s hard because I want to be out there, but everything happens for a reason. It’s given our young guys a chance to get out there and play. I’m going to Texas and signing soon, so it is good to be out here coaching these guys up to get to that next level.”

That type of maturity is what Texas loves in Alford, outside of his on-field play. He’s a leader who helped Shadow Creek reach the Class 5A Division II state championship game in its first year as a varsity program. Alford already knows where he’ll line up for Texas, and the Longhorns need as much help as possible in the secondary.

Alford took his official visit to Texas for the Oklahoma State game, though he plans on getting back to Austin for the Kansas State contest next week. The recruiting process is officially in the rear-view mirror for Alford, and his advice to younger players across the nation is simple: Wait.

“Be patient and figure out what is best for you because things will change throughout the process,” he said. “Just wait. Don’t rush the biggest decision of your life over emotions.”

A new name from the area to emerge on Texas’ radar is Lamar Consolidated athlete Taye McWilliams. The three-star Baylor commit picked up a UT offer last week as an athlete. The Longhorns like him as a linebacker. It’ll be tough for Texas to flip him with Baylor undefeated and his cousin, Jaylen Ellis, a freshman at Baylor.

#AGTG blessed to receive an offer from the university of Texas after a great conversation with @CoachTOrlando pic.twitter.com/nhj7AtibK2

“I wouldn’t say Texas is a major threat to Baylor because I haven’t built as strong of a relationship with them like I have with Baylor,” McWilliams said after his game on Friday. “The Baylor coaches treat me like family.”

McWilliams admitted that Texas should get a visit from him before the end of the season. He said Texas first started contacting him in May.

The Dotted Line: A look back at Texas’ top-rated recruits from each class this decade