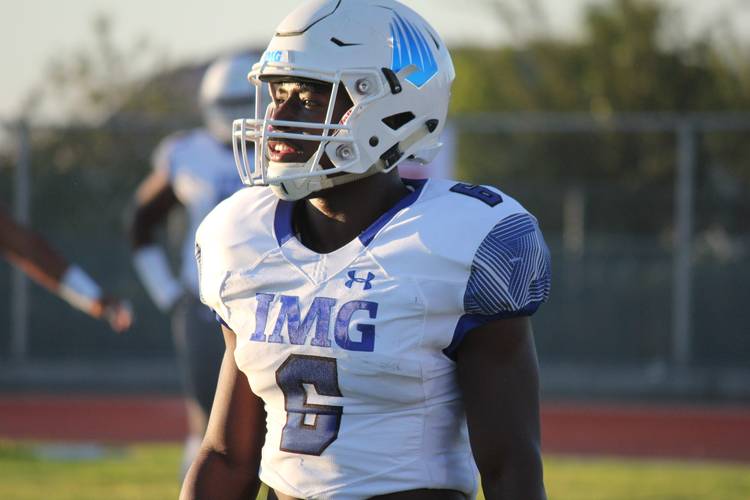 The Longhorns are ranked inside the top 10 of the AP Poll for the first time in eight years and recruits around the country are taking notice of what’s cooking in Austin under Tom Herman. It started with a win over USC when Texas hosted dozens of recruits, then continued with wins over TCU and Oklahoma. Texas is back — at least in the minds of the recruits.

Here is a look at the top five players remaining on Texas’ recruiting board. Keep in mind that Texas wants to add a JUCO product on the offensive line but is still evaluating which players to offer.

Texas is the leader for McCoy. I repeat: Texas is the leader for the nation’s top athlete and that wasn’t true when he stepped on campus for his official visit when the Longhorns hosted USC. Texas wowed McCoy with its performance on the field and the bond between the players on the team. Current Texas commit De’Gabriel Floyd is leading the charge for McCoy and is doing a great job helping to recruit his fellow Californian. McCoy can play wide receiver or outside linebacker and would immediately be the best player in Texas’ class.

Texas earned a commitment from four-star running back Derrian Brown following the USC win and the Longhorns would love to add a second back with so many questions at the position. Will Kyle Porter stay? What about Toneil Carter? The Longhorns need bodies and the best running back in the class was secretly high on Texas the entire cycle and the Longhorns are starting to make a real push for his services. Sanders also was in town for the win over USC.

Texas leads for Washington and the four-star receiver is set to pick a school on Oct. 26. It would be a surprise if Texas didn’t add Washington, who was a finalist at The Opening in Arlington over the summer. Texas’ three current wide receiver commits project to the slot position and Washington would provide Texas a longer wide receiver who can play on the outside. He was set to commit to Ohio State before the Urban Meyer scandal and that gave Texas another shot to persuade him to Austin. It’s worked.

Many assumed Catalon would wind up at Texas, but it’s proving to be a real battle. Arkansas is making a real push for him. Catalon hopes to play football and baseball in college with football his main sport. He says he won’t make an announcement until December and his relationship with assistant coach Craig Naivar will keep Texas in the mix. Arkansas is a real player for Catalon.

Texas picked up a commitment from its third linebacker in the 2019 class last week when Katy Cinco Ranch four-star David Gbenda pledged. Texas wants to sign four linebackers and the top target remaining on its board is Johnson, a JUCO product committed to Iowa State. Johnson would provide immediate depth at the position much like Gary Johnson did when he joined Herman’s class in 2017.