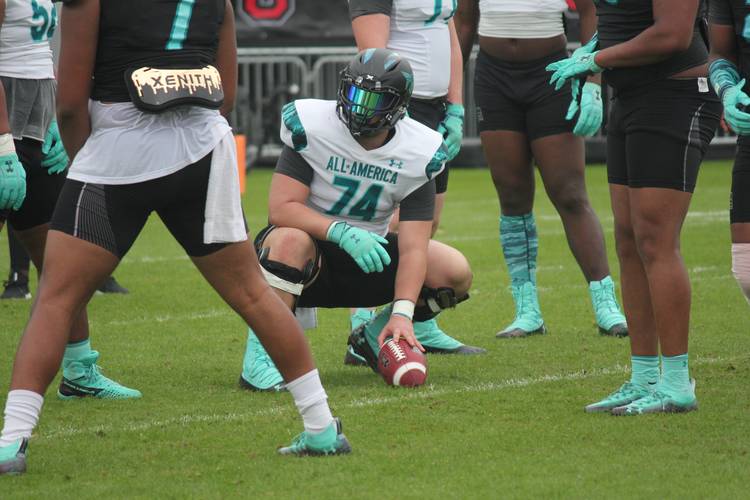 ORLANDO — Jake Majors snapped the ball to Hudson Card on Monday at the Under Armour All-America Game practice. It could very well have been a future moment for the Texas offense.

They were among the 17 prospects in the 2020 class that have signed with Texas. They’re also among the four future Longhorns expected to play in the main event on Thursday night.

“I love snapping to Hudson Card,” Majors said behind his trademark smirk. “It’s the future center-quarterback combo at Texas, so we’re getting the hang of things right now.”

Card echoed the excitement through his laid-back demeanor.

“It’s cool to get Jake snapping me the ball. It’s a little preview for the future,” Card said. “I’ve gotten to know him more since we came to Orlando and he’s a great guy.”

Card is the nation’s second-ranked dual-threat quarterback. The 6-2, 179-pound four-star led Lake Travis to the state semifinals in consecutive seasons. He was an all-district performer at wide receiver as a sophomore. He hopes to inherit the crown from Sam Ehlinger, but not before learning from the current face of the program.

Card enrolls at Texas in a week. He’ll go through the full offseason under new offensive coordinator Mike Yurcich. Card understands his role early in his career.

“My job is to go in there and compete. I need to learn from Sam (Ehlinger) and the other guys,” he said. “I’m ready to get bigger, stronger and faster. We’ll all be learning new stuff with a different offensive coordinator, so I can watch how the older guys study and improve my game.”

For this week, though, Card is relishing in his final moments as a high school athlete.

“It is really fun. I get to be with the guys and meet new people. It’s a cool experience,” Card said. “The toughest adjustment is the speed of the game. Everyone out here is special.”

Majors is adjusting to the speed and strength of elite defensive linemen while practicing at a new position. The four-star played left tackle at Prosper. He’ll move inside at Texas and is also enrolling in January. Majors is playing center this week in Orlando. He’ll cross-train at guard and center once on campus.

“Moving to center is a tremendous adjustment,” Majors said. “First is snapping ball before I start my assignment. I haven’t done that in a live-action game. Each position up front is a whole different ball game with footwork and responsibilities. It’ll become natural.”

Majors is using the week to learn.

“The competition is crazy,” he said. “I get to go against some of the best defensive tackles in the nation. Those guys are dogs and I get better every rep. It’s challenging moving to center, but I’m getting the hang of it. I’m doing good and trusting my coaches. I’m picking up little nuggets here and there.”

12 big things about Big 12 basketball, Week 8 — Our pre-conference 13 best players in the league