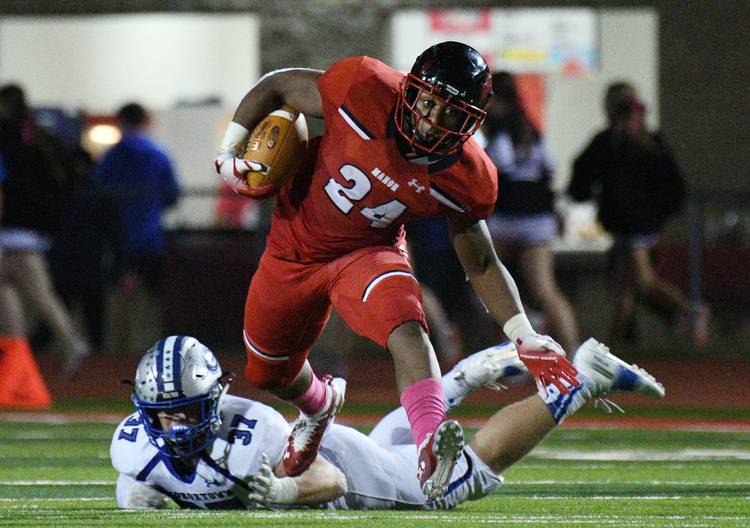 It’s a privilege for both players to be part of the new generation of talent from the 512. It’s a tight-knit group in a town that’s still small compared to recruiting hotbeds like Houston and Dallas despite the growing population in the capital city.

“It’s fun helping put Austin on the map and help some other guys get looks,” Umanmielen said.

The two are also high-profile recruits. Umanmielen is a 6-4, 256-pound four-star defensive lineman. He can play end or tackle. He attended the Orange-White game last weekend with some of Texas’ top targets. Umanmielen plans to release his top five in May. Expect Texas and Oklahoma to make the cut. He plans on taking five official visits, with a trip to Texas on May 4 set in stone.

“It was fun at the spring game. All of the players made me feel like family,” Umanmielen said. “It was cool to see all the alums back in town. It proves that Texas is forever. There is some pressure, but it’s fun. Some people walk up to me and say ‘Hook’em.'”

Umanmielen is the No. 31-ranked player on the Fabulous 55. He was a first-team all-district selection as a junior after recording 21 tackles for loss, 5.5 sacks and two forced fumbles. He’s the No. 11-ranked strong side defensive end in the nation and a national top-200 player in the country. He’s among a trio of elite defensive line prospects alongside Bastrop Cedar Creek defensive end Alfred Collins and Houston Cypress Ranch defensive tackle Vernon Broughton.

“I look at the coaching staff and see how they make me feel at home. The facilities and the rosters are also important,” Umanmielen said.

The recruiting process still shocks Umanmielen, who admitted that he wouldn’t have believed where he’s at as a prospect had you told him as a freshman. He wasn’t aware of his potential until the spring of that year when college coaches on Manor’s campus to watch other prospects noticed the young big man who moves well. He’s now a regular on the camp circuit, refining his skills.

“I learn how to use my hands more,” he said about events like The Opening. “I get to show off my pass-rushing ability.”

Brooks is a three-star running back who originally committed to Tulsa but now is open with offers from TCU, Texas Tech, Cal, Vanderbilt and Arizona. The 5-10, 212-pound prospect rushed for more than 1,100 yards as a sophomore and a junior.

“I’m open, but I’ll make my final decision in August,” Brooks said. “It’s been fun. It’s crazy sometimes. I enjoy the process. I’m just trying to find the right fit for me. It’s about the brotherhood of the team, the coaching staff and what degree I can get.”

The two teammates expect big things from the Mustangs this fall as spring football begins in earnest after the Easter holiday.

“We’re going to be good this year,” Brooks said. “Our goal is to go at least as far as we did last year.”

His personal goals are 2,000 rushing yards, 700 receiving yards and at least 28 touchdowns. Lofty goals for a local kid also happy to get his turn in the recruiting spotlight among his peers around the city. The revolution won’t be televised. It’s taking place around Austin on Friday nights in the fall.

“It’s fun because we’re all like brothers,” Brooks said. “We see each other around town or in 7-on-7.”

Top-ranked Oklahoma sweeps Texas, but ‘there’s a lot to learn from playing this team’