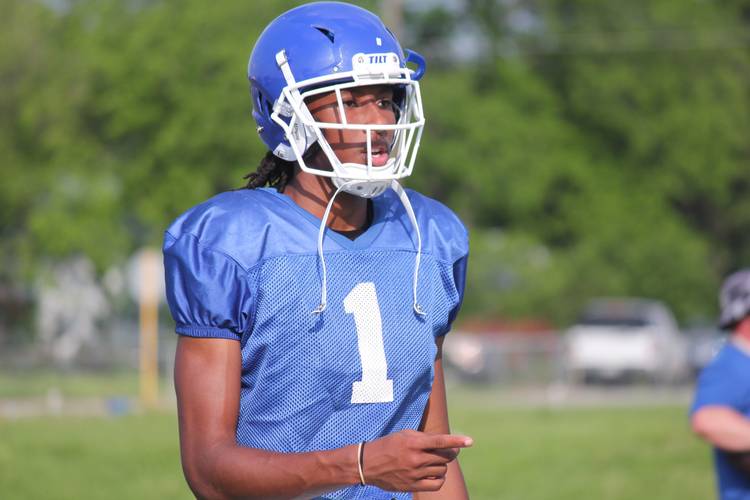 TEMPLE — Quentin Johnston prefers to make his noise on the football field. The four-star wide receiver from Temple is a quiet kid. He’s not a teenager glued to his cell phone. In fact, coaches struggled to reach him throughout the recruiting process. Not because he wasn’t interested or respectful, but because he was busy living life.

Johnston’s talent is big, even if his personality isn’t large. The 6-4, 180-pounder is the fourth-highest rated player in Texas’ 2020 recruiting class, trailing just Bijan Robinson, Hudson Card and Ja’Quinden Jackson.

Texas’ class consists of 20 players and ranks fifth in the nation. Johnston is the 13th-ranked wide receiver in the country, per 247Sports’ composite ratings. He caught a touchdown pass in Temple’s recent victory over Killeen and credited his relationship with assistant coach Drew Mehringer for his commitment.

“Mehringer is a high-spirited coach and we have a great relationship,” Johnston said after the game. “It’s felt like I’ve known him for a long time. That’s hard to find.”

The recruiting status and pledge to Texas isn’t stopping Johnston from improving as a senior. The three-sport star is constantly working on something. Right now, that includes physicality.

“I’m trying to expand on last year and working on the small things as the position like blocking,” he said. “I’ve improved at blocking the most as a senior, and it is mainly effort. It’s best to mess up at 100 miles per hour.”

Johnston was set to watch the Red River Showdown in person on an unofficial visit to Texas. It was his first time at the event and he was looking forward to experiencing the atmosphere. He was on hand earlier in the year when Texas played LSU.

“The LSU game was electric. Everyone was hyped and it was a good feeling,” he said. “Wide receivers get the ball a lot, and I like that.”

Texas doesn’t just use wide receivers. The Longhorns enjoy big-bodied receivers. The offense was built around Collin Johnson and Lil’Jordan Humphrey in 2018. Players like Brennan Eagles and Malcolm Epps are emerging in 2019. Johnston hopes to be next in line.

“Texas likes bigger, taller receivers, so I feel like I fit in just fine,” Johnston said.

TCU head coach Gary Patterson was in Temple to watch Johnston on Friday, but the Texas commit said after the game that he’s 100-percent pledged to the Longhorns and that he doesn’t plan to take official visits to other schools. That’s a sigh of relief for the UT staff since Johnston is the Longhorns’ top-rated wide receiver in the cycle.

“I’m excited to be part of the program,” he said. “My former teammate Jared Wiley says great things.”