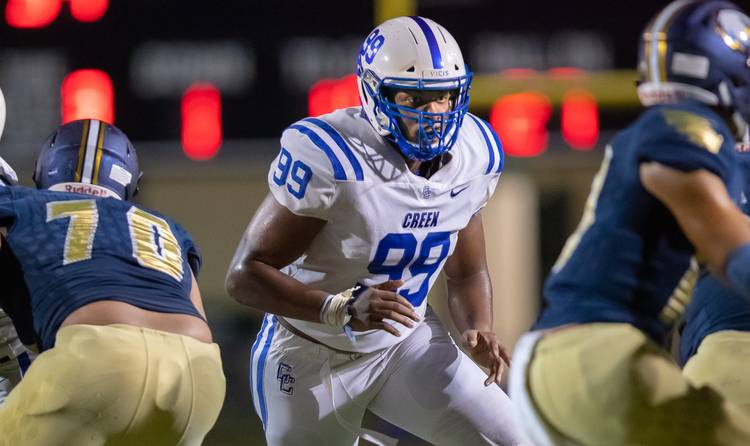 Texas’ 2020 recruiting class consists of 20 prospects and ranks fifth in the country. The top-ranked class in the Big 12 isn’t likely to reach the full allotment of 25 signees, as even head coach Tom Herman acknowledged that a lack of attrition in the program means fewer scholarships available on the recruiting trail. Still, there are a few spots remaining in the cycle. Here are three possible future Longhorns:

The latest: The Austin-area star continues to grow in size and recruiting stature. He’s up 45 pounds since his junior season and is approaching 6-7. The former basketball player kept his athleticism and is in the conversation for being the best defensive lineman in the state for 2020. He can play defensive tackle or defensive end in an odd-man front.

Texas is the clear leader and Collins is the undisputed top priority for Herman’s staff. Landing him would give Texas pledges from the state’s three best defensive linemen with Collins, Vernon Broughton and Princely Umanmielen.

Collins is taking his time with the recruiting process and was steadfast that he’d take official visits to multiple schools before deciding on a destination. He took an official to Oklahoma and Alabama in September. He’ll be at Texas A&M on Oct. 11 and in Austin on Oct. 18.

The latest: Burns is a new name on Texas’ radar; he picked up an offer on Wednesday. The three-star outside linebacker pledged to Ole Miss back in April. Herman’s staff wouldn’t have extended an offer to Burns unless the Longhorns felt like they have a shot at flipping him. Burns is a Texas native who was a first-team all-district selection at Terrell as a junior.

Texas doesn’t hold a commitment from a true linebacker in the 2020 class, though four-star Highland Park product Prince Dorbah is expected to transition from prep defensive end to college B-backer. Burns is the top target unless the Longhorns can sway Houston Cypress Creek four-star outside linebacker Josh White away from his LSU commitment.

The latest: The family ties to Texas might be too strong for Dixon and the Longhorns to resist each other despite his commitment. His older brother is Keaontay Ingram, Texas’ starting running back. Dixon is listed as an athlete. Texas wants him at slot receiver. The explosive prospect would bring more athleticism to the position. Dixon picked Arkansas back in the summer, but a renewed push by Texas combined with the struggles at Arkansas could make Texas the favorite.