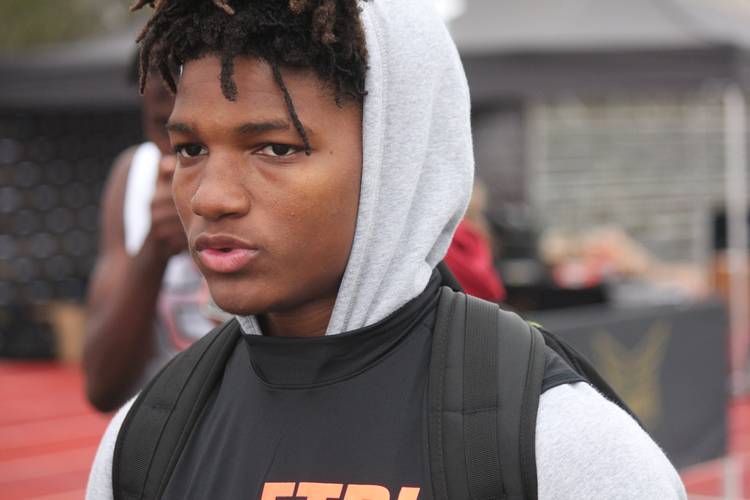 Texas signed arguably the country’s best wide receivers class in the 2019 cycle with prospects like five-star Bru McCoy and Gatorade national player of the year Jake Smith. It was a four-man group — five if Jordan Whittington moves back outside during his career — that brought headlines and set Texas up for success out wide for the next three to four years.

That doesn’t mean the Longhorns aren’t hunting for more top-level receiver prospects to add to the roster in 2020. Fort Bend Austin’s Troy Omeire is the No. 5-ranked player on the 2020 Fabulous 55 and a top target for Texas and wide receivers coach Drew Mehringer. He was fresh off a visit to Texas at The Opening regional in Houston on Sunday.

The big-bodied (6-3, 217) wide receiver plans to pick a school by the end of his junior year and considers Texas among his top schools with Texas A&M, Notre Dame and LSU.

“I had a good time. Chopped it up with the coaches and went over the routes they use for big guys like Collin (Johnson) and LJ (Humphrey),” the four-star Omeire said about the visit to Austin. “I feel like I’m better than they were in high school, so I can do what they do and more once I get to the next level and get stronger and faster.”

Omeire holds 30 offers and is the No. 15-ranked receiver prospect in the country, per 247Sports’ composite ratings. He’s a two-time first-team all-district selection with the production to match his impressive frame. He’s caught 85 catches for 1,546 yards and 21 touchdowns in his two-year varsity career.

“Texas will get an official (visit),” Omeire said. “I like how coach Mehringer concentrates on fundamentals. He’s not too flashy. I like that about him because I’m like that.”

Omeire says he doesn’t know where he’ll wind up, but he knows what he wants in a program.

“Want to go somewhere that I get the ball and can get a good degree because football won’t always be there,” he said. “I like A&M because of the offense and it’s close. Notre Dame is a good school with academics.”

Alvin Shadow Creek’s Xavion Alford is a priority target on the other side of the football. The four-star safety also participated at The Opening regional in Houston over the weekend. The 6-0, 182-pound defensive back ran a 4.55 40-yard dash and hit 36 inches on his vertical leap.

Alford holds 40 offers and ranks No. 36 on the Fab 55. He’s a versatile safety who can also play nickel back. He’s made multiple trips to Austin over the past two months and is in constant communication with the Texas staff, though he’s in no rush to pick a college.

“I talk to coach (Craig) Naivar everyday. He’s just a real honest coach who is fun to be around. He knows his stuff,” Alford said. “That secondary was great last year. I won’t pick a school until around the early signing period or on national signing day. I want to take my officials in the fall.”

The 2021 class is dominated by offensive linemen. And the early leader for the state’s top 2022 prospect is Humble Atascocita offensive tackle Kam Dewberry. The 6-4, 285-pound freshman started at left tackle on varsity last year for an offensive line that included Texas A&M signee Kenyon Green. Dewberry dominated older defensive linemen throughout The Opening regional, which came as no surprise to the future five-star prospect.

“Playing on varsity gave me the confidence to not feel like a freshman at these camps. I go against seniors every game,” Dewberry said. “Kenyon taught me some small details and how to work harder.”

“I believe that the best in Texas stay in Texas,” he said. “When I was young, Texas was always a favorite of mine. It’s beautiful down there and it already feels at home. Building a relationship with coach Hand. He treats his players well and he makes them into better men.”