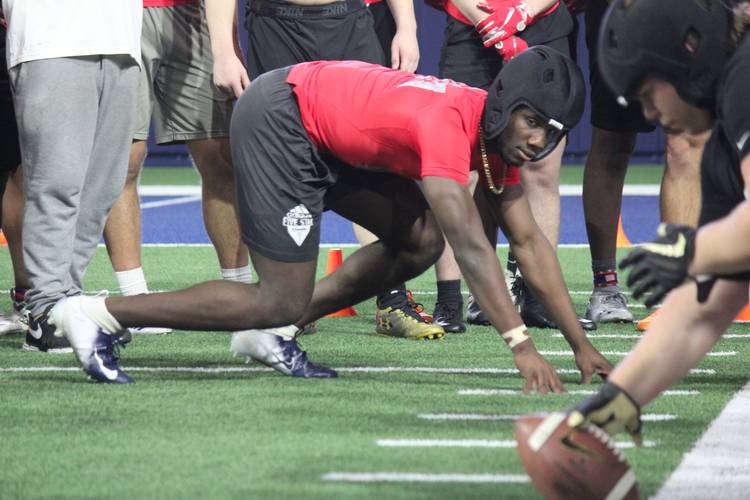 Recruiting is cyclical. Sometimes Houston possesses more talent than Dallas-Fort Worth. Sometimes it’s the other way around. Sometimes a class is loaded at one position and void of elite talent at another. That’s the case in 2019 with linebackers. Texas needs to sign a solid class at the position with the long-term health of De’Gabriel Floyd uncertain.

The problem? There aren’t a ton of in-state options.

Texas’ defense deploys three linebackers in the starting lineup — a B-backer who is used as an edge rusher to offset the odd-man front, a middle linebacker called the Mac, and the Rover, a weak-side linebacker tasked with making plays. The Longhorns feel good about the target at B-backer in the 2020 class with Highland Park defensive end Prince Dorbah expected to sign with Texas. He was at the Orange-White game.

Dorbah is a 6-2, 208 pound four-star who ranks as the No. 28-ranked player on the 2020 Fabulous 55 and the No. 15-ranked outside linebacker in the country, per the 247Sports composite rankings. He plays defensive end for the defending Class 5A Division I state champions. He recorded 20 sacks as a junior and would serve as depth behind Joseph Ossai early in his career.

It’s the other linebacker positions that remain question marks. Targets at other positions are lined up. Five-star Zach Evans is the top target at running back. Troy Omeire is the highest priority at wide receiver. Chad Lindberg and Damieon George are the two remaining pieces along the offensive line. Vernon Broughton, Princely Umanmielen and Alfred Collins are priorities at defensive line, while Bryson Washington and Chris Thompson Jr. are the top two targets at safety.

It’s hard to identify linebacker targets among the current offers. A home run would be five-star linebacker Justin Flowe. The product of Upland, Calif. is the top-ranked inside linebacker in the country and the only inside linebacker holding an offer from Texas in the entire 2020 class.

The 6-2, 225-pound prospect recently named Texas among his final 12 schools. Gaining an official visit is Texas’ shot with the linebacker, and it can’t hurt that the Longhorns enjoyed success in California in the 2019 cycle by signing Floyd, Chris Adimora and Bru McCoy.

Nine outside linebackers hold UT offers, including Dorbah. The other in-state offers are Josh White of Houston Cypress Creek and Brennon Scott of Dallas Bishop Dunne, which is also the home of current 2020 commit Jaden Hullaby. Scott is a 6-1, 230-pound four star while White is the same height, but slightly more athletic at 200 pounds. Both are ranked on the Fab 55.

“Texas, LSU and OU stand out right now, but I’m still finding the best fit,” Scott said. “The coaches say I can play inside or outside linebacker, or even B-backer at a place like Texas. I like rushing the passer and that intrigued me.”

The best outside linebacker in the country is five-star Sav’ell Smalls of Burien (Wash.) Kennedy Catholic. He was offered nearly a year ago. Texas must earn an official visit to stand a chance, though Smalls should be considered a long shot. A name worth remembering is Damian Sellers of Scottsdale (Ariz.) Saguaro. The 6-4, 235-pound four-star is in a state Texas enjoys recruiting.

The Longhorns aren’t done evaluating. It’s likely that new names surface at the positions as the staff can scour the country in the spring evaluation period. Tom Herman and Todd Orlando also have shown a willingness to recruit JUCO linebackers later in the cycle to fill the needs it can’t on the prep circuit.

Texas’ recruiting class is taking shape despite just one commitment since Feb. 17. Outside of Dorbah, the legitimate targets at linebacker remain question marks. It’s one of the positions Texas must figure out as the cycle edges into the summer.