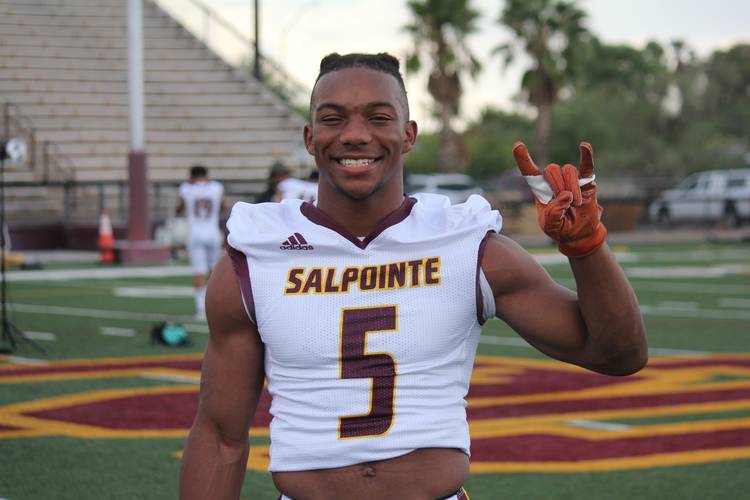 The 2020 recruiting cycle officially closed for the top targets in the class on Monday morning when news broke that five-star running back Zachary Evans enrolled at TCU. The Galena Park North Shore product was the last member of the 2020 Fabulous 55 to pick a school. The vast majority of players signed their national letters of intent in December or on national signing day in February.

Optimism surrounding the start of football season, even if it’s without fans in the stands, is mounting. True freshmen across the nation should find it harder to carve out starting roles in 2020 because of the inability to work out on campus with the coaching staff and the whole team. Yet there are sure to be new faces making big impacts for programs this fall.

Who were the top-rated signees made by each Big 12 school, and will those players make noise in their first year on campus?

Robinson didn’t pick Texas over national powers like Ohio State to watch from the sideline. He was the only five-star to sign with a Big 12 program until Evans wound up at TCU. Robinson rushed for more than 2,000 yards in each of his final three years at Tucson (Ariz.) Salpointe Catholic. He ended the cycle as the highest-rated running back in the nation, per 247Sports’ composite rankings, one spot above Evans.

The Longhorns should feel confident about the running back position heading into 2020. Robinson doesn’t need to be a star early because Texas brings back Keaontay Ingram and Roschon Johnson, but the Longhorns do need him to show the five-star talent by the time Big 12 play rolls around.

Evans, out of North Shore, is the first five-star recruit to sign with TCU out of high school. He’s only one of two five-star prospects to sign with a Big 12 program, joining Robinson at Texas.

Evans is an incredible talent. He averaged nearly 10 yards a carry on the varsity level, helping North Shore become the premier program in the state over the past two seasons. He also missed multiple games as a senior due to suspension, including the state finals. Still, TCU found gold if he arrives on campus with an elevated sense of responsibility and maturity. Evans’ problems as a prep star were more about a lack of discipline and structure than anything criminal. Horned Frogs coach Gary Patterson added a dynamic piece to the offense if Evans is locked in and ready to produce.

Oklahoma’s top-rated recruit is from Texas. Anderson, out of Frisco Reedy, was the state’s top interior line prospect, ranking 13th on the Fab 55. He was one of two top-100 national prospects who played guard to sign with Oklahoma, joining Andrew Raym. That is a strong interior for the future. However, it’s rare for a true freshman to make an immediate impact along the offensive line. It’s more likely that skill position signees like Seth McGowan, Marvin Mims or Bryson Washington will make a real impact in 2020.

Oklahoma State found its quarterback of the future in the big-bodied Illingworth, from Norco. Calif. The four-star was the No. 6-ranked pro-style quarterback in the class. He’ll wait his turn behind Spencer Sanders.

An influx of young talent is needed at every position for the Mountaineers in the second year under head coach Neal Brown. West Virginia took a great step in the 2020 class, signing the nation’s 37th-best recruiting class, which was an 11-spot improvement from the 2019 cycle. While Brown did concentrate on premier JUCO talent, Vincent-Okoli (from The Bullis School, in Potomac, Md.) was the highest-rated prep player to pick West Virginia. Possessing quality at defensive back is a must in the Big 12.

Iowa State isn’t in need of quarterback help in 2020 with the return of Brock Purdy, considered a potential first-round pick in the 2021 NFL draft by numerous experts. Dekkers is a dual-threat quarterback from Hawarden (Iowa) West Sioux with a big frame and a strong arm. He was the state of Iowa’s second-best prospect in 2020, representing a big win for Cyclones coach Matt Campbell.

The Red Raiders never seem short on wide receiver talent. Fouonji, from Midland Lee, was a member of the Fab 55 who turned down an offer from Texas to stay in West Texas. Texas Tech should utilize his talents early and often, though wide receiver isn’t always the easiest transition to make from high school to college because of the added emphasis on blocking and more complex route combinations. Fouonji is a big target who can immediately become a go-to weapon in the red zone and on third down.

Matt Rhule didn’t spend a ton of time recruiting in the 2020 class and his departure to coach in the NFL after the season proved the reasoning. Baylor’s class ranked 59th in the nation despite the Bears having played for a Big 12 title. Sylvester was the cream of the crop with Jahdae Barron electing to transfer to Texas following Rhule’s departure. Sylvester was a dominant player for small-town East Texas powerhouse Newton, helping his school capture two state titles. His ability to rush the passer should be used in spots as a freshman.

Kansas needs as much help as it can get, so I fully expect Les Miles to use multiple true freshmen in his second year leading Kansas, including Bryant, who signed out of Evergreen (Ala.) Hillcrest.

Kansas State manages to win without creating waves on the recruiting trail. Matlack, from Olathe East High in Kansas, appears to be the perfect fit for the Wildcats’ defense. He’s a hard-nosed defensive end with the toughness to stop the run and the athleticism to become a solid pass rusher.