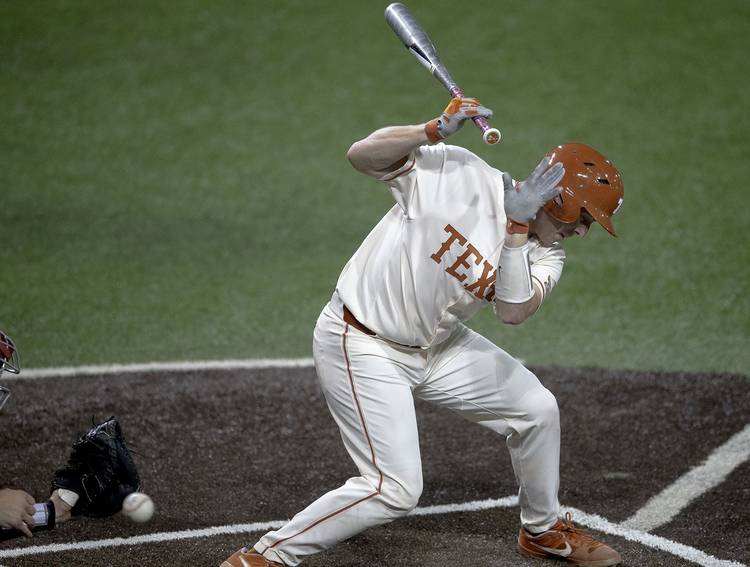 Texas catcher Michael McCann (40) reacts to being hit by a pitch against Arkansas on March 20, 2019 in Austin. [NICK WAGNER/AMERICAN-STATESMAN]

Beauty may be in the eye of the beholder, but Texas will have a hard time convincing anyone that Wednesday’s game against Arkansas wasn’t ugly.

Still, don’t expect the ninth-ranked Longhorns to give back their 7-6 victory over the 11th-ranked Razorbacks. The one-run victory at UFCU Disch-Falk Field, which took nearly four hours to complete, snapped UT’s five-game losing streak against Arkansas. It also came one day after the Longhorns (16-8) were the victims of an 11-4 blowout by the Razorbacks (18-3).

“No one knows what the box score looks like whenever you see it on the record,” Texas designated hitter Zach Zubia said. “It’s a quality win for our team. I’m really proud of the guys and how we performed today.”

Advertisement
One of Texas’ six hits was Zubia’s game-tying single in the sixth inning. An announced crowd of 6,260 also witnessed a run-scoring flyout by Michael McCann. UT took unconventional paths to its other five runs.

“You can’t try to do too much,” Zubia said. “If you get hit by a pitch or you get walked, you’ve just got to accept it. You can’t try to make the pitcher throw you a strike if he’s not going to.”

Also featured on Wednesday’s quirky boxscore was an early deficit. Entering this two-game series, Texas had outscored its opponents 23-9 during the second innings of its 22 games. On Tuesday, however, Arkansas scored six times in the second. The Razorbacks then jumped out to a 4-0 lead in Wednesday’s second inning.

Making his first career start, UT freshman Kolby Kubichek did not survive the inning after surrendering four hits and plunking a batter. Arkansas scored on two singles, a sacrifice bunt and UT’s first error since March 10. Texas responded and scored all seven of its runs between the third and sixth innings.

Arkansas threatened to rally with an RBI double in the ninth. But Cole Quintanilla closed out a three-inning save with a strikeout of pinch-hitter Matt Goodheart.

“That was a character check,” Texas coach David Pierce said. “We weren’t good early again today, they were real good. We could have easily just said ‘Hey, here we go again,’ but we never saw that. We continued to fight at home plate, not the best results but we’ll take it.”

Wednesday’s contest was UT’s 12th this month against a team ranked in the D1Baseball poll. The Longhorns are 7-5 in those games. Any breaks in the schedule, however, won’t come this weekend as UT will travel to No. 22 TCU for a three-game series. Earlier this week, first baseman Tate Shaw said that UT’s action-packed month would benefit the Longhorns in the postseason.

“Playing good teams, it teaches us to battle,” Shaw mused.

Around the bases: One of seven pitchers who appeared for Texas, Tristan Stevens was credited with the win. … Zubia and Masen Hibbeler both collected two hits. … Brothers Evan and Collin Taylor were two of the seven relievers used by Arkansas. …  Pierce said that freshman pitcher Ty Madden (shoulder) will play catch on Thursday. Madden, who was suddenly pulled from Sunday’s game against Texas Tech, has not had an MRI yet.