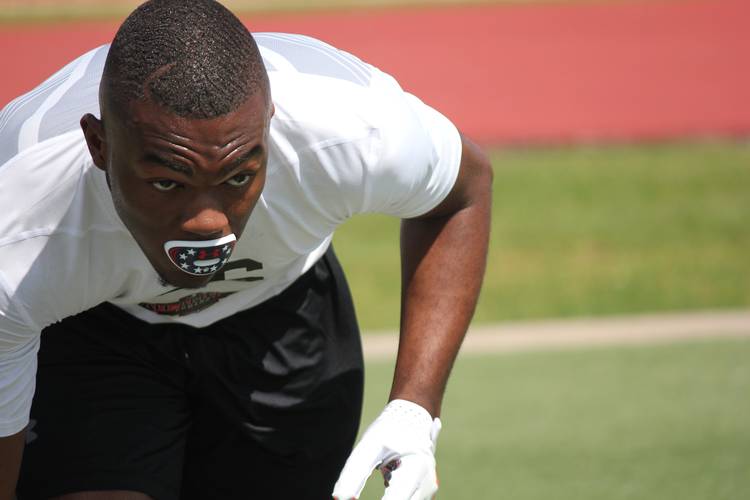 MANVEL — Not all diamonds are found in the rough. Jalen Preston’s talents were apparent to everyone from an early age, and entering his senior season at Manvel, the four-star wide receiver ranks as the No. 5 player on the Fabulous 55 and holds offers from 22 of the top programs in the nation.

“We knew he’d be a big timer in seventh grade,” said Manvel head coach Kirk Martin. “He has a unique skill set. Not many athletes get P5 offers in football and basketball. LSU offered him as a freshman before he played a snap of varsity football. We all knew.”

Preston knew before Martin. The 6-2, 212-pound bully of a wide receiver was a star for the Fresno Gators Pop Warner football team. The praise he received at an early age shaped his future. Though his reasons for playing the game are beginning to change, even before he gets to college.

“I fell in love with football the first time I put on pads when I was five or six years old. I scored a lot, so people in the stands would be yelling my name. I guess that was cool in elementary school,” Preston said. “We wanted the attention of the fans. Now you do it so your family can eventually get some money.”

That Fresno Gators team was loaded. Houston Lamar’s Al’Vonte Woodard, also a Fab 55 member, was a wide receiver on that little league team.

“We had a play called ‘Fake-22-Dive-Go’ and it was the first play we called each game,” Preston laughed. “I’d fake it to the running back, throw it up and Al’Vonte would go get it.”

Wide receiver became Preston’s permanent position in the eighth grade. He admitted receiver was the easier route to earning playing time. He was a good quarterback, but Manvel had better options. Preston wasn’t used to not touching the ball every play. It was a frustrating position switch until the last few years.

As he has developed his ball skills and technique as a wide receiver, Preston’s production has increased. As a sophomore, he recorded 11 catches for 257 yards and two touchdowns. He added a kickoff return for a touchdown. His talent was obvious, yet he wasn’t polished or consistent.

Manvel is never lacking in talent, so Preston waited for his turn and improved. It paid off as a junior. He caught 33 passes for 664 yards and 10 touchdowns, adding three scores on special teams. It earned him special teams MVP all-district honors.

The accolades and the recruiting attention aren’t changing Preston. He’ll compete at The Opening Finals in Oregon this summer, but Martin says no one would guess Preston is a player in high demand. He’s still a teammate, first and foremost.

“He’s humble and his parents have done a great job keeping his feet on the ground,” Martin said. “I’m incredibly impressed with the job they’ve done with Preston. He’s 100 percent the same type of teammate now as he was before all the attention. He can go to whatever school he wants, but he’s still at bible study on Sunday. Once the season starts, we’ll re-direct these guys away from recruiting and back into football.”

Most blue-chip wide receivers are fast. Most of them can catch and run routes. Not all of them can move cornerbacks and safeties like Preston. His physical nature makes him nearly impossible to jam at the line of scrimmage and it also makes him one of the best edge blockers in the state.

“You’re not going to find another kid on the planet more competitive than Jalen,” Martin said. “He’s the toughest football player on our team. He’s a passionate athlete on top of being a freak athlete. There’s a reason he’s getting all of this attention.”

For Jalen’s part, he’d rather talk about Manvel’s goals than his future college.

“State, all the way,” said Preston when asked for his senior expectations. “We’ve experienced the fourth round enough. There is more responsibility on me as a senior leader and I do that by setting the tone on the practice field. The work starts now and we need to take it serious instead of waiting until the playoffs.”

Preston might not know his college choice, but he knows what he wants in a program.

“I’m interested in schools that pass a lot,” he said. “And I want to play my first year.”