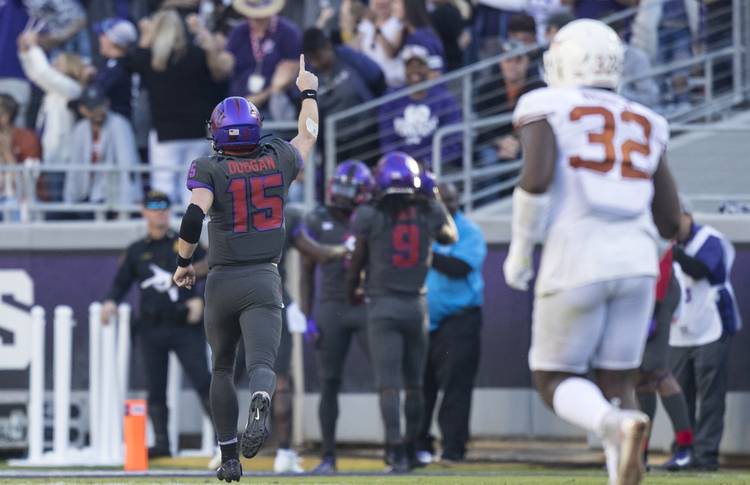 FORT WORTH — There were 147 snaps taken in No. 15 Texas’ 37-27 loss to TCU on Saturday. Here are five that ended up making a big difference:

The first drive of the afternoon belonged to TCU, and the Horned Frogs punted after moving 25 yards in six plays. That was only the second time in eight games that the Longhorns had forced a punt on their opponent’s first possession. Led by quarterback Sam Ehlinger, UT’s first drive was more prosperous.

Ehlinger completed 4 of 5 passes on the 12-play drive as Texas marched from its 17 to the TCU 3. UT then scored the game’s first points as Cameron Dicker kicked a 21-yard field goal.

Dicker’s kick was a bit surprising since Texas was facing a fourth-and-1 at the TCU 3. UT coach Tom Herman has expressed a disdain for short field goals. TCU, though, has one of the nation’s top run defenses, and Texas had been thwarted on two fourth-and-2 attempts in the previous week’s win over Kansas.

Texas took a 17-10 lead when Ehlinger connected with Keaontay Ingram for a 17-yard touchdown with 1 minute, 11 seconds left in the second quarter. After an illegal block, TCU started on its 6-yard line with 1:04 remaining. But the Horned Frogs scooted to the Texas 34 on six completions from Max Duggan. TCU then had freshman Griffin Kell try a 52-yard field goal to end the half.

Kell, who had tried only two field goals as TCU’s backup kicker, missed his first attempt. That play, though, didn’t count because Texas had called a timeout before the snap in an attempt to get into Kell’s head. Kell coolly nailed the second kick.

The attempt to ice Kell came two weeks after Oklahoma called three timeouts before Dicker attempted a 49-yard field goal at the end of the Red River Showdown’s first half. Dicker made his field goal.

D'Shawn Jamison gets caught peeking toward the backfield. Reagor just runs straight past him for the score. TCU up 27-20. pic.twitter.com/Jq5pTbwsoy

One of three receivers on the All-Big 12 preseason team, TCU junior Jalen Reagor was held to two catches Saturday. One of them, however, was a 44-yard touchdown that came at the expense of Texas cornerback D’Shawn Jamison. That play gave TCU a 27-20 advantage with 4:17 left in the third quarter.

Reagor’s catch was not the third quarter’s only big play. A 1-yard touchdown run by Sewo Olonilua came two plays after Taye Barber hauled in a 51-yard pass. And 63 of Devin Duvernay’s career-high 173 receiving yards helped set up the second half’s first points, a 38-yard field goal by Dicker.

On the final play of the third quarter, Ehlinger was intercepted by safety Trevon Moehrig. The final quarter opened with a six-play drive by TCU and Jonathan Song’s 33-yard field goal.

TCU turning a turnover into points was a trend Saturday. Reagor’s touchdown pass was caught and two field goals by Song were kicked on possessions after an Ehlinger interception. Before Saturday’s game, UT’s seven turnovers had resulted in four touchdowns and a field goal.

Ehlinger finished the game with a career-high four interceptions. Over UT’s first seven games, Ehlinger was intercepted three times in 255 pass attempts. He was intercepted only five times during his sophomore season, and he set a conference record when he went 308 straight passes without a pick.

5. Finished by the Frogs

After Song’s second field goal gave TCU a 10-point lead, Texas responded with a 12-play, 75-yard touchdown drive. Down 30-27 with 6:50 remaining in the game, UT desperately needed a defensive stop.  Instead, TCU put the Longhorns away with a nine-play drive and Duggan’s 11-yard touchdown run.

Texas twice pushed TCU’s back to a wall, but Duggan converted a third-down pass both times. The freshman completed a 16-yarder to John Stephens on a third-and-11. He then scored one play after lofting a beautiful 36-yard pass to Barber on a third-and-14 play.

On Saturday, TCU converted six of its 13 third-down plays. The last two successes helped the Horned Frogs secure their third straight win over Texas at Amon G. Carter Stadium. TCU has won those three games by a combined score of 111-41.