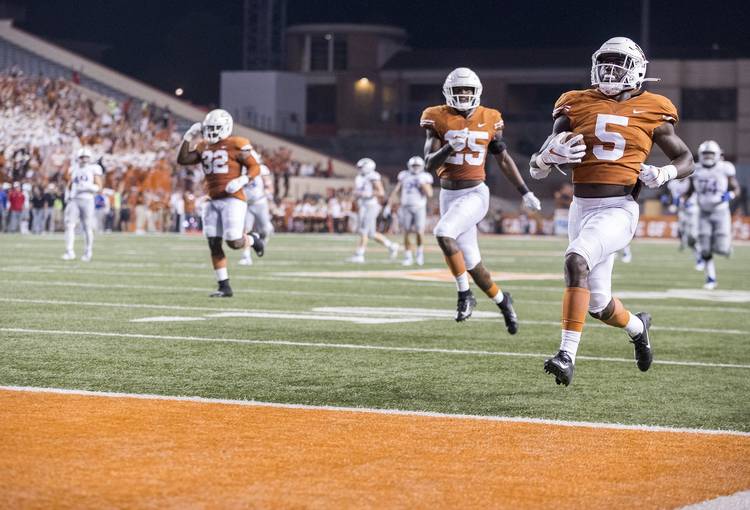 Texas defensive back D'Shawn Jamison (5) scores against Kansas on Oct. 19, 2019 in Austin. [RICARDO B. BRAZZIELL/AMERICAN-STATESMAN]

There were 171 snaps taken in Texas’ 50-48 win over Kansas on Saturday night. Here are five that ended up making a big difference:

Texas scored the first 14 points on Saturday, but Kansas went on a 17-0 run to stun an announced crowd of 97,137. Toward the end of the first half, though, UT receiver Brennan Eagles found himself lined up against cornerback Hasan Defense. Both players wear No. 13 and Defense initially got the best of Eagles on a pass break-up in the end zone. But two plays later, Eagles boxed out Defense near the goal line on a 5-yard touchdown catch.

The touchdown was Eagles’ fifth of the season. On Saturday, freshman Jake Smith also caught his fifth touchdown while senior Devin Duvernay hauled in his fifth and sixth scores. Texas last had three receivers with five touchdown catches in 2007.

Tied at the end of the third quarter, Texas went up 31-24 on the fourth quarter’s fourth play. Kansas punted on the ensuing drive but an interception of Sam Ehlinger set the Jayhawks up at the Texas 16. Running back Pooka Williams Jr., then quickly turned that mistake into a touchdown run.

Kansas would be unable to tie the game, though. Texas defensive end Malcolm Roach blocked the extra point attempt by Liam Jones, who also had a 37-yard field goal swatted in the first half. The blocked extra point caromed to sophomore D’Shawn Jamison, who returned the football for a two-point conversion and a 33-30 Texas lead.

In his college career, Jamison has scored three times on special teams. He has also tallied touchdowns on a 90-yard punt return and a 98-yard kickoff return.

Texas built a 40-30 lead in the fourth quarter, but Kansas wouldn’t wilt. The Jayhawks scored 10 points in less than three minutes, and Andrew Parchment beat Jamison for a game-tying touchdown catch with 4:25 left. Like the Jayhawks’ first touchdown of the quarter, Parchment’s score was set up by a Texas turnover.

Facing a second down at its 23, Ehlinger connected with Smith for a 13-yard gain. At the end of the play, Smith lost the ball on a hit by KU safety Mike Lee. Texas tight end Cade Brewer had a shot at the loose football, but a review upheld the call that Kansas’ Bryce Torneden had possession.

Smith’s turnover was UT’s seventh of the season. Those giveaways have led to four touchdowns and a 29-yard field goal for UT’s opponents.

Texas and Kansas combined for 50 points in the fourth quarter. Seven of those points were attributed to Keaontay Ingram’s 3-yard touchdown, a score with 2:47 remaining that was set up by Brewer’s 51-yard catch. That touchdown gave Texas a 47-40 lead. The Jayhawks needed only 96 seconds to come up with a response.

Over the course of an eight-play drive, Kansas quickly marched 75 yards. On the eighth play, Kansas quarterback Carter Stanley found Stephon Robinson for a 22-yard score. With 1:11 left on the clock, Kansas kept its offense on the field and Stanley and Daylon Charlot hooked up for the two-point conversion.

The two-point conversion was the second allowed by UT this season.

With Kansas eyeing its first-ever win in Austin, Texas was left enough time to put Cameron Dicker into a position for a game-winning field goal. The sophomore kicker was up to the task. His 33-yard kick as time expired lifted UT to the dramatic victory.

To set up Dicker’s kick, Texas moved 60 yards in nine plays. The key player on the drive was senior receiver Collin Johnson, who had 11-, 16- and 20-yard catches.