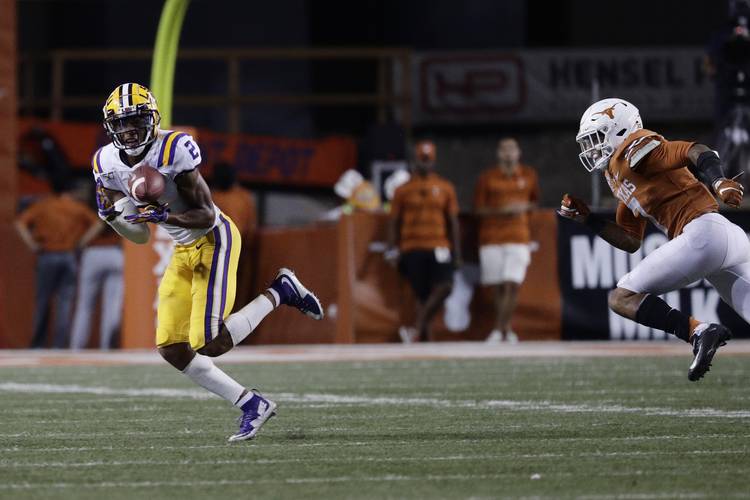 The Longhorns’ overall defensive speed would be “probably a different level than we’ve had around here,” Orlando promised. Then, he offered caution. “Now, where that speed goes, I don’t know?”

Coach Tom Herman refused to name names Monday when asked about defensive miscues during Saturday night’s 45-38 loss to LSU. If anything, he deflected some questions about his unit and praised LSU’s Joe Burrow, who threw for 471 yards and four touchdowns while shredding the UT secondary.

“It’s very fixable,” Herman said. “I think we’re all just assuming that it was the secondary’s fault that people were open. That’s not a fair assumption until you know what each coverage was called and whose responsibility that is.”

Herman said some linebackers were out of position on some of the underneath coverages. LSU’s Justin Jefferson simply crossed in front of and ran away from safety Caden Sterns on the critical third-and-17 touchdown play late.

“We’ve got to get better everywhere on that side of the ball,” Herman said. “And including us as coaches, you know, and if that means we got to dial back a little bit, so be it.”

Orlando meets with reporters only on Wednesdays, per Herman’s instructions. The head coach takes all the slings and arrows on Mondays. After two games, the UT pass defense ranks 127th nationally.

“Obviously, we’re facing a much different animal this week, in terms of what Rice is going to do offensively,” Herman said. “So won’t really get to test that as much this week. The entire team, we’ve got to get better. And the safeties are part of that team.”

Herman deserves serious credit for elevating the program to a point where the Longhorns are again playing serious, big-time football. But sometimes, he gets prickly.

“Our goal is not to just belong. Our goal is to win those things,” Herman said. “And I get there’s a bit of PTSD around here for the prior decade or so.

“I told our team in three years, we’ve come this far” Herman said as he held his arm extended. “And we’ve got this far to go to be elite,” he continued, indicating the last inch. “And that last bit is the hardest part, right? And we’re getting there.”

Two season-opening losses to Maryland on Herman’s watch didn’t help. Charlie Strong at least started 2-0 in 2016, the year he was ultimately fired. Prior to that season, UT’s last 2-0 start came under Mack Brown in 2012.

What likely chaps Herman is that Texas was in a strong position to beat LSU, now the No. 4 team in the nation.

Herman said the way Burrow threw the ball with pristine accuracy was “something to see.”

“We’ve got to do better, though,” Herman said. “We’re going to face really good receivers and really good quarterbacks in (the Big 12). But we’re also not ready to sound all the alarms just yet, knowing the caliber of what we just played and knowing that the improvements are certainly fixable.”

Asked how he would assess the performance of the cornerbacks, Herman said, “Not great.” The competition there will continue this week, meaning nobody’s job is considered safe. Texas allowed 471 passing yards.

Herman did say nickel back B.J. Foster, who had two sacks Saturday, suffered a “pretty significant” hamstring injury and will be out a couple of weeks. DeMarvion Overshown, who had a key sack on a third-down blitz against Louisiana Tech, will likely move into Foster’s spot.

“Malcolm Roach and Keondre Coburn, they had a very, very good game (against LSU),” he said. “They were very disruptive. Stats don’t matter for defensive lineman. Do you disrupt the offense? And if the answer is yes, you’re doing your job.”

Two years ago, defensive tackle Poona Ford had 1.5 sacks and 8.5 tackles for loss all season and was named the Big 12 defensive lineman of the year. Last season, Charles Omenihu didn’t have a sack in the first two games but finished the year with 9.5 and won the same award.

In Herman’s mind, the defense needs work but not an overhaul and certainly not major personnel changes. It’s “fixable,” as he says. Burrow might end up being the best throwing quarterback Texas faces all season.

As for calling a blitz on that specific third-and-17 play, Herman said, “He made a great play. Great play. We don’t as coaches ever think about shoulda, woulda, coulda.”

Then, he abruptly turned and said the media “wanted me to fire coaches, change this and change that after an entire season, and we stayed the course. So, one game, a seven-point loss to the No. 4 team in the country, we’re going to be OK. We’re going to figure out where we need to improve and improve it.”