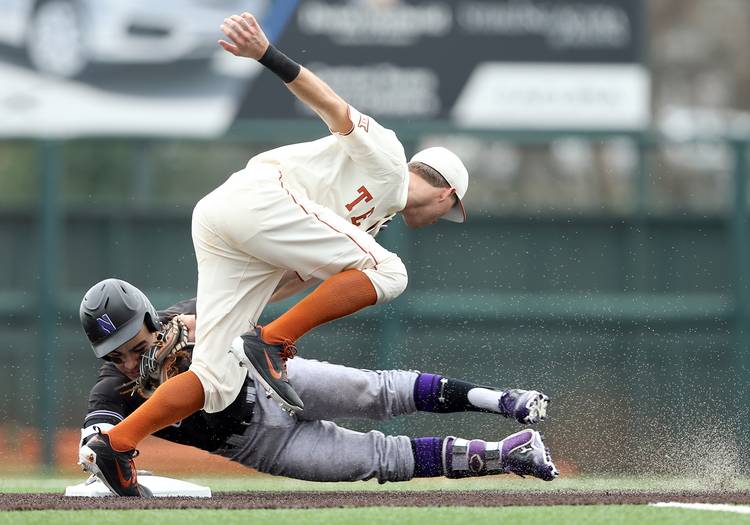 Longhorn second baseman Kody Clemens gloves the ball and tags Northwestern base runner Alex Erro for an out at UFCU Disch-Faulk Field on March 4, 2018. JAMIE HARMS / FOR AMERICAN-STATESMAN

To close out a long weekend, David Pierce and Texas’ Longhorns worked a shorter shift on Sunday.

Eight starters combined for 15 hits, and Texas strolled to a 12-1 win over Northwestern at UFCU Disch-Falk Field. The two teams agreed to call the game after the seventh inning. Pierce was ejected in the fifth inning after he objected to a checked-swing call.

Texas (8-4) was playing for the third time in a two-day span, and it outscored Northwestern 38-11 in those contests. The three wins came after UT dropped a 6-2 decision to the Wildcats (3-7) on Friday.

“That wasn’t us, we knew that wasn’t us,” junior Masen Hibbeler said of the series-opening loss. “We just decided, let’s just do what we do. Come out and keep the hammer down… and just dominate.”

Texas scored in six of Sunday’s seven innings and never looked back after seizing a 2-0 lead in the first frame. The Longhorns had five runs by the time Northwestern made its lone trip across home plate in the third inning.

Hibbeler collected hits in four of his five at-bats, and he exited the game with a .388 batting average. One day after he clubbed his first home run of the season, sophomore infielder Ryan Reynolds went deep again. Freshman designated hitter Zach Zubia had three RBIs, and Reynolds drove in a run during three different at-bats.

“We learned from that first night that we couldn’t take them lightly,” said Hibbeler, who scored three times. “We came in these last three games really trying to keep the hammer down and keep playing the way we do.”

Texas entered this weekend averaging 4.8 runs per game, but that statistics jumped to 6.5 after Sunday’s showdown. The 11-run rout followed 10-7 and 16-3 wins on Sunday. The Longhorns last scored double-digit runs in three straight games in 2009.

“I think we’ve been swinging the bats fairly well since the season started,” Reynolds said. “We’ve faced some good pitching and good competition, and I think we’re doing a great job handling that and battling all the adversity we’ve had.”

Freshman pitcher Bryce Elder was credited with the victory after he surrendered a single hit over the weekend’s final 2 2/3 innings. Elder relieved junior Matteo Bocchi, who was making his first start at Texas.

Bocchi, who was Hibbeler’s roommate at Odessa College last year, allowed two hits in 4 1/3 innings. Two of the Italy-raised right-hander’s 77 pitches recorded strikeouts. Northwestern drew four walks, one of which forced in a run.

In the third inning, Bocchi got a double-play groundout to escape a bases-loaded jam.

So happy, and proud to be a Longhorn.

THE WALL IS DOWN!!!! pic.twitter.com/DCFJN0yzz0

Around the bases: A green wall obstructing the view from outside the stadium in left field was removed after the game. … UT assistant coach Sean Allen took the lead following Pierce’s first ejection in 75 games at Texas. After he exited, Pierce said he showered and watched the rest of the game on TV. …  Kody Clemens extended his hit streak to 12 games with a triple. … Starting Thursday, Texas will host a four-game series against Stanford. In D1Baseball’s most-recent poll, Stanford and Texas were ranked eighth and 23rd.