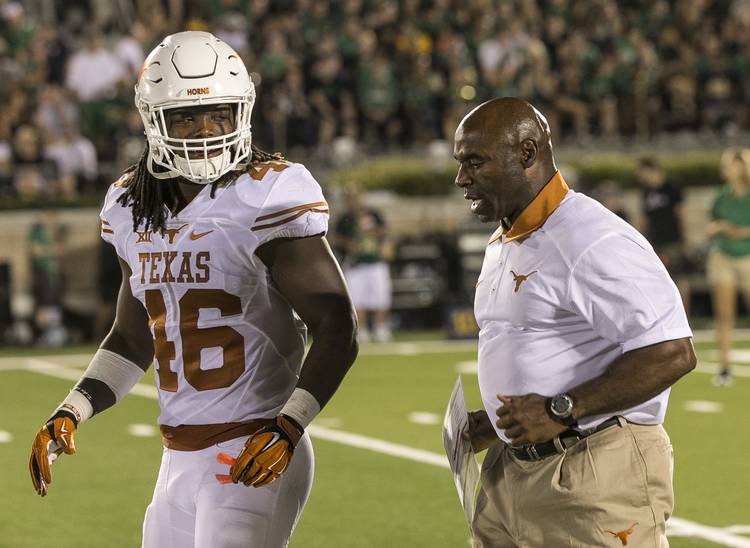 Malik Jefferson is a start.

The freshman linebacker made his anticipated debut and registered nine tackles, second most in the game to teammate Peter Jinkens’ 10.

“I feel all right about it,” Jefferson said. “I think I could have done better at the end of the day.”

On Notre Dame’s opening drive, Jefferson made two tackles from his inside spot. He led all players with 2.5 tackles for loss.

“Just wanted to go out there and have fun and make plays,” Jefferson said. “I couldn’t make every play, but I was trying my best. I was trying to go 100 percent every play.”

In the spring game, Jefferson said he got tired. That was not the case on Saturday, he said. Jefferson was on the field for all but one series until late in the game when several backups substituted into the game.

As a whole, this was a night Jefferson would sooner forget. The Longhorns were gashed for 527 yards and 30 first downs. Notre Dame converted 8 of 14 third downs and controlled possession for 11 minutes each in the first and fourth quarters.

“I’m very surprised,” Jefferson said. “I wanted to go out there and dominate. I’m not used to getting scored on. That’s something I’ve grown up doing.”

Irish quarterback Malik Zaire threw incomplete just three times and had 313 yards and three touchdowns. He was sacked just once — by Jinkens for 12 yards — and rarely felt pressure from Texas’ front.

“We didn’t pressure him hard enough to get sacks,” Jefferson said. “We didn’t get enough sacks to get turnovers. We just didn’t make a lot of plays today. As a defense, we’re known for turnovers. We gotta come back next weekend (against Rice) and hit them hard.”

Jefferson was among five true freshmen starters, along with offensive linemen Patrick Vahe and Connor Williams, punter Michael Dickson and receiver John Burt. Next to Jefferson, Burt had the finest night of the rookie class, hauling in a 48-yard catch. The presence of Jefferson, a five-star prospect from Mesquite Poteet, helped the Longhorns and coach Charlie Strong sign a top-10 recruiting class in February.

Jefferson called making his debut in Notre Dame Stadium “a true honor to be in a stadium with a lot of history in it.”

“At the same time, I’m really down about the whole loss,” Jefferson said. “Especially since we didn’t fight hard enough.”