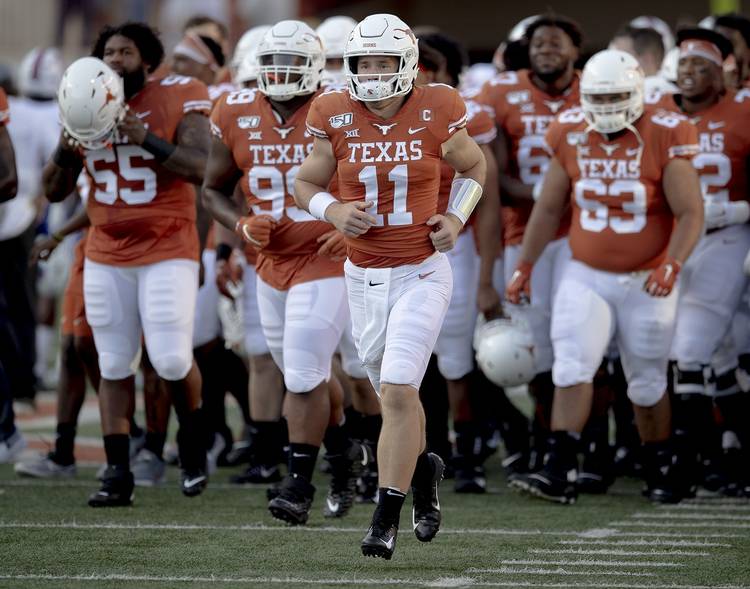 Texas players take the field before a college football game against Louisiana Tech on Aug. 31, 2019 in Austin. [NICK WAGNER/AMERICAN-STATESMAN]

Burrow was Herman’s Sam Ehlinger before the coach and the quarterback became intertwined at Texas.

As an assistant at Ohio State, Herman drove almost 80 miles to Athens, Ohio to see Burrow throw as a high school recruit. He fell head over heels for the 160-pound coach’s son who left even then-Buckeyes coach Urban Meyer skeptical.

Herman and Burrow never made it to the Horseshoe, though. Herman got a phone call from the Houston Cougars, who offered him his first head coaching job. Burrow, who then was courted by Herman’s replacement at Ohio State, new offensive coordinator Tim Beck, did end up signing with the Buckeyes, served as J.T. Barrett’s backup and then transferred to LSU.

Herman and Burrow will finally be on the same field Saturday night, but on opposing sidelines. Herman leads ninth-ranked Texas while Burrow is the star quarterback for sixth-ranked LSU.

“I owe a lot to coach Herman,” Burrow told reporters this week. “He was the only coach from big-time programs that had any faith in me.”

It’s the first top-10 matchup in Austin since 2012, but it’s easily the biggest non-conference game at Royal-Memorial Stadium since No. 1 Ohio State clashed against No. 2 UT in 2006, Colt McCoy’s second career start. For you youngsters, Notre Dame, which was ranked 10th in 2016 but ended up going 4-8 that year, and 22nd-ranked USC in 2018, don’t even remotely compare.

ESPN’s “College GameDay” is making its first appearance in Austin since 2009. The game’s been sold out for weeks with ticket prices in the secondary market staring around $400 and rocketing higher.

“We’re very excited to have GameDay here,” UT President Gregory L. Fenves said. “It has been 10 years, and I think it’s another indication that the program is going strong and we’re getting a lot of attention.”

Burrow arrived at LSU last season as a graduate transfer and went 10-3 as the starter. He became the first Tigers quarterback in school history to throw for at least 2,500 yards and rush for 350 more. He tied the school record with seven rushing touchdowns by a quarterback. In last week’s 55-3 season-opening win over Georgia Southern, Burrow tied a school record with five touchdown passes — all in the first half.

“Obviously, I don’t know him as a person,” UT safety Brandon Jones said. “Just watching our film, I think he really prides himself on being that leadership guy, not only for the offense but for the team as a whole.”

“I love Joe,” Herman said earlier this week. “He reminds me a lot of our guy. He’s physically, mentally tough. He’s uber-competitive. He’s a leader amongst leaders.”

Said Texas defensive coordinator Todd Orlando: “To me, he’s very similar to our guy. Very gritty, confident, complete control to make all the throws. That’s going to be a hell of a challenge for us.”

“Our guy,” as Texas fans would say, is every bit the competitor Burrow is. Last season, Ehlinger was the first player in UT history to throw 25 touchdown passes and score at least 15 more on the ground. Only five previous Power Five-level quarterbacks accomplished that. All five were Heisman Trophy winners.

Ehlinger has thrown 27 touchdowns and only three interceptions in his last 14 games. The Horns are 11-3 during that stretch. He already holds the school record with 16 rushing touchdowns scored by a quarterback. That’s two more than Vince Young.

The quarterback matchup highlights what should be a terrific national TV broadcast. So this game probably comes down to each team’s secondary units and how they handle the heat.

LSU has two potential first-round draft picks in its secondary — safety Grant Delpit and cornerback Kristian Fulton. Both are sensational. Ehlinger found 10 different targets in last week’s 45-14 win over Louisiana Tech. Getting rid of the football fast is key against what is a typically fast LSU defensive front.

“You know, the LSU DBs, the whole LSU team, is a polished group of guys, and I’m excited to play the best,” UT receiver Collin Johnson said. “That’s why you come to UT is to play the best, and that’s plain and simple. So I’m excited for the challenge, go out there and do my best.”

Texas’ problem is its running game. Keaontay Ingram is the only healthy scholarship running back at this point. A rash of injuries wiped out everyone else.

Third-string quarterback Roschon Johnson is now two weeks into learning how to play running back. He had seven carries for 26 yards against Louisiana Tech. Linebacker David Gbenda moved over to offense this week.

“Roschon, he’s learned it so quick,” Ingram said. “He’s taking it all in. Any chance he gets, he’s putting in the extra work in film session. He’s asking questions, being real mature about the situation. I feel like we’ve got the right guy in the room.”

Meanwhile, the Texas secondary doesn’t have the quite the same reputation as LSU’s. Jones and Caden Sterns are well-respected, of course. But Jalen Green was the only cornerback who graded out as a “champion” last week. Kobe Boyce, D’Shawn Jamison and Anthony Cook had choppy performances.

“Ball goes up in the air, if you’re at the University of Texas, we expect you to either knock it down or come down with it, when you’re in position to be able to do it,” Orlando said.

The Longhorns shouldn’t sweat it, though. LSU is implementing a new spread offense, which features things UT players see on a weekly basis in the Big 12. Orlando will also keep riding the new Cowboy package that features eight defensive backs. That puts the most speed on the field possible.

But again, Herman cautions against going all out, all the time against Burrow. “We definitely know how intelligent he is and be cautious with how we approach that,” the Texas coach said.

This game has all the pageantry you’d expect from LSU-Texas.

It’s far and away the biggest national game of the week. Texas invited a slew of recruits to make unofficial visits. Matthew McConaughey will be the celebrity guest picker on GameDay. The country group Midland will perform on the LBJ Lawn before the game, and there’s a silent disco for students afterward.

The loser isn’t necessarily knocked out of the College Football Playoff race. But the winner propels itself into the thick of the conversation.