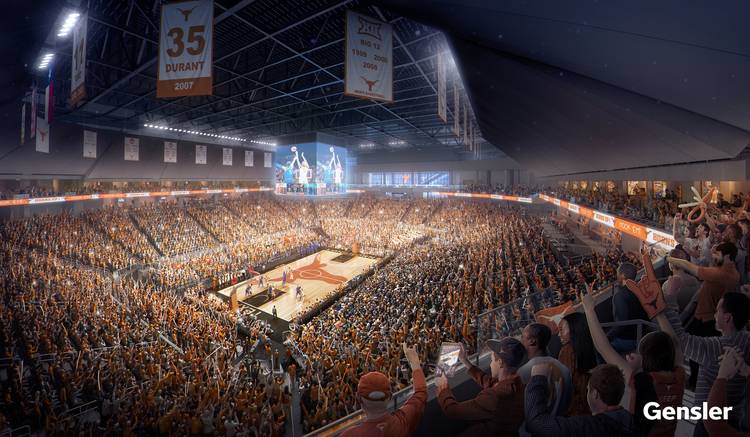 The Moody Center will be the name of the of Texas' new basketball arena in honor of a $130 million gift from the Moody Foundation, the university announced last fall. (Courtesy University of Texas/Gensler)

Oak View Group, the California-based outfit that wrote the check, had no issue with that. Best to get it in writing, though.

According to the 124-page contract between UT and its new partner, the university reserved 60 calendar days each year — the majority being UT men’s and women’s basketball games and UT and high school graduation ceremonies.

Scheduling “must be a cooperative endeavor,” but Oak View Group’s managers will have scheduling priority from March through October for concerts and other events. The arena, currently under construction to replace the Erwin Center, is scheduled to open in the fall of 2022.

The American-Statesman obtained the two sides’ contract agreement along with nine other documents about arena construction totaling 615 pages through an open records request, one that was ultimately approved by the state’s Attorney General.

Most of the documents detail construction, covering everything from tree removal to waste management. The facility will be configured to hold about 10,500 fans for UT basketball games and can be expanded to 15,500 for other events.

Long touted as an “innovative partnership” by school officials, this public-private arena financing model is likely to be copied by other colleges going forward. Fenves won’t see one of his signature achievements through, however. He’s left UT to become president at Emory University in Atlanta.

“It’s a win for students, fans, student-athletes, the city of Austin and Longhorn Nation and this deal could very well set a new precedent for how colleges and universities develop new complexes across the country,” interim UT President Jay Hartzell told the Statesman.

Texas officials and Oak View Group spent most of 2019 negotiating the terms of the agreement. In February, the Statesman first made a request for the finalized contract via the state’s open records laws. That request was submitted to the Attorney General for review.

In recent years, UT was able to shield certain contract language from the public due to Texas Supreme Court rulings made in 2015. The university claimed it was following the law, shielding sensitive data that third parties believed would damage future negotiations.

Enacted in the early 1970s, the Texas Public Information Act presumes that all government documents are public. State entitles are now compelled to show contractual information between parties. This contract, a first-of-its-kind for UT, is something of a test case for other schools to track. Oak View Group is building the new Moody Center on its own dime; UT was required only to cover some utility work and minor issues. No taxpayer money is being used to build the new arena.

The arena contract lays bare one unmistakable fact: UT officials control the building and revenue on days of university events and Oak View Group controls everything on days of its events. Texas owns the building and the land underneath it; OVG will manage the facility as part of a 35-year agreement with a five-year option.

Oak View Group CEO Tim Leiweke told the Statesman in December that about a dozen other universities had already expressed interested with his company once the UT deal went public.

“Are there other places that could do this? Maybe,” Leiweke said at the Moody Center groundbreaking ceremony. “But if you’re going to make a bet, make it here first because it’s the Longhorns and it’s Austin.”

All ticket, parking, concession and merchandise revenue goes to UT on days of Longhorns games, for example. UT sets the ticket pricing and even the costs of hot dogs and popcorn. But the contract states that OVG controls the ticket costs and pricing on concert days, meaning the costs could be different.

Texas also gets 20% of all revenue generated by the suites regardless of the event — a financial kicker of sorts that will goose the bottom line.

“One of the things we went in with the premise of this arena and the relationship was that we needed to make sure that we protected our basketball revenue,” UT athletic director Chris Del Conte told the Statesman. “We were appreciative that we were able to do that and excited about that opportunity.”

The contract outlines how Oak View Group and its investors plan on recouping their investment. OVG can sign eight permanent sponsors, approved by UT, that will have prominent signage throughout the building. All signage boards inside the seating bowl will be electronic, as stipulated in the contract, to show UT’s sponsors on game days.

There are even specific things outlined in the contract the arena cannot be used for. Prohibited activities include a casino, a massage parlor, a laundromat or — in case there’s any lingering doubt — “use of the arena as the home arena of a professional or semi-professional sports team.”

What’s unclear is how many events OVG can fit into the calendar while working around UT’s basketball schedule.

Last season, the men’s and women’s basketball teams played 33 home games. The day before each game, the Erwin Center floor is typically available for visiting teams to have shoot-around practices upon arrival in Austin. That availability is expected to remain the same at Moody Center and not count against UT’s 60-day total.

The Erwin Center hosted about 40 events last year. Each touring act works on its own schedule, and each act pays rent for setup and tear-down time.

It’s unlikely OVG can keep the building full every waking moment with touring artists; nobody can. But there’s likely to be plenty of activity each week on the spot once home to parking lot 70 just south of Mike A. Myers Stadium.

Once the Moody Center is open, per the contract, UT will “not permit … basketball games to take place in the Frank Erwin Center.”

Nov. 9, 2019: After $130 million gift, the University of Texas to name new basketball arena for Moody family