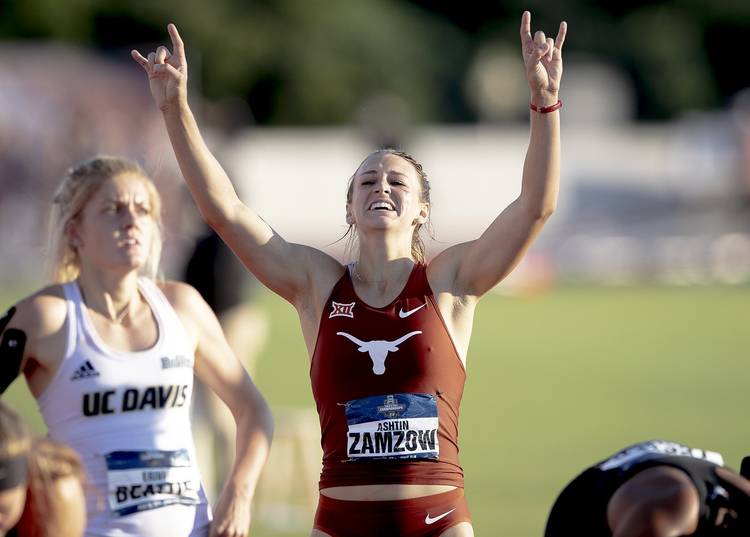 On a sunny Saturday in Austin, Ashtin Zamzow found herself with four hours to kill.

The Texas senior had finished throwing the javelin around 3:15 p.m., but the final event in the NCAA’s heptathlon competition wasn’t scheduled to start until 7:13 that evening. So, Zamzow got treatment on her knee and went back to her hotel room for a shower. She watched television and had a good cry while thinking about the ups and downs of her collegiate career.

Then it was time to win a national championship.

Zamzow held off Texas A&M sophomore Tyra Gittens to win the NCAA’s heptathlon at Myers Stadium on Saturday. The championship in the heptathlon was a first for both Zamzow and the Texas women.

“I still can’t believe it,” Zamzow said. “It’s going to take me about a few days to swallow that pill.”

Following the heptathlon’s first four events on Friday, Gittens had tallied 3,872 points and built a 161-point lead on Zamzow. That outing, however, put Zamzow ahead of her pace at the Texas Relays. Zamzow’s UT-record score of 6,148 in April had been the only 6,000-point performance in the country this season.

Upon returning to Myers Stadium on a 96-degree afternoon, Zamzow traded a win in the javelin for Gittens’ conquest in the long jump. Zamzow, though, finished sixth in the long jump while her javelin sailed 53 feet further than her 18th-place Aggie counterpart. Those two efforts catapulted Zamzow into the lead.

Up by 60 points, Zamzow entered the 800-meter finale as a heavy favorite. After all, the 800-meter time that she recorded at last month’s Big 12 meet (2:21.68) was better than the conference showing by Gittens (2:36.92). Gittens had also spent additional energy during the afternoon while competing in the NCAA’s high jump event.

Aware of the math, Zamzow joked that her father called her to tell her to just not fall. She indeed kept upright over her two trips around the track, and she took half of a victory lap for good measure after she finished in 2:21.31.

“The game plan was just to run as hard as you could, go out normal and finish with as much as you have left,” Zamzow said.

The 6,222 points that Zamzow finished with broke her own school record. Over the two-day competition, she established personal records in the 100-meter hurdles, 200-meter dash and long jump. She also matched her best-ever effort in the high jump.

“This is what we’ve been preparing for,” UT assistant coach Matthew McGee said. “It sounds a little arrogant, but that’s the whole deal with training (an heptathlete). We’re trying to prepare ourselves to do exactly this in a competition.”

Zamzow will soon turn her attention to qualifying for this fall’s world championships and her upcoming wedding to fellow UT athlete Wolf Mahler. In her final meet at Texas, she was responsible for ten of the team’s 20 points. Texas tied with three other schools for 10th place in the team standings.

Fellow senior Teahna Daniels chipped in 9.25 points as she closed out her collegiate career with All-American finishes in the 100- and 200-meter dashes. She was clocked at 11 seconds in the 100 meters, but that fourth-place time was overshadowed by a jaw-dropping 10.75-second run from LSU phenom Sha’Carri Richardson. Additionally, Daniels finished fifth in the 200 meters.

“(In 2018), I wasn’t an All-American or anything,” Daniels said. “I’m proud of myself, regardless of how I placed. I’m just happy that I was better than last year.”