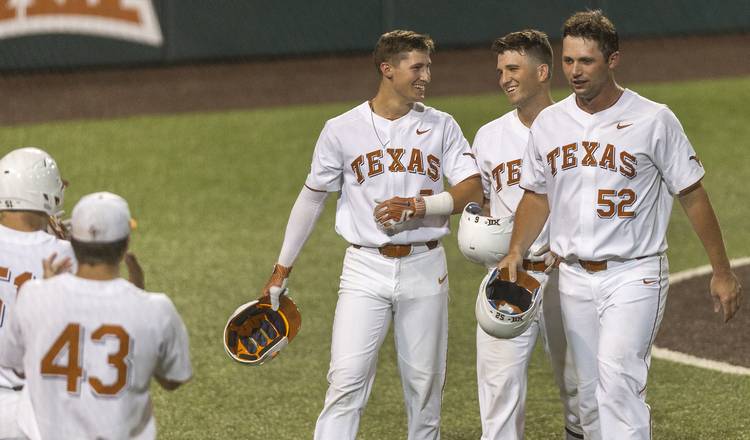 Led by a quartet of newcomers, Texas has set up a date with an old foe.

UT opened its 59th appearance in the NCAA tournament with a 10-0 shutout of Texas Southern on Friday night. Texas improved to 38-20 with the win in its opener of an NCAA regional hosted by UFCU Disch-Falk Field.

Up next for the Longhorns: Texas A&M.

“A&M, it’s a rivalry. This place is going to be electric tomorrow,” said junior Chase Shugart, the winning pitcher on Friday.

Texas took the lead in the second inning after DJ Petrinsky scooted home on an errant pickoff attempt. Petrinsky then hit a three-run homer during a third inning that saw Texas triple its 2-0 lead.

Petrinsky finished the game with two hits, two runs, two walks and four RBIs. The junior catcher also caught a runner stealing for the 24th time this season. Petrinsky spent the past two years at Hill College, which made Friday’s stage the biggest he’d ever played on.

“It’s just a tad bit bigger,” Petrinsky said. “It was incredible. The fans were great. I loved playing here.”

Petrinsky was one of 10 transfers that joined UT’s roster this season. Sophomore outfielder Duke Ellis, who spent last spring at Panola College, went 2-for-5 with a RBI on Friday. Left fielder Masen Hibbeler scored twice. Matteo Bocchi, Hibbeler’s fellow junior and ex-roommate at Odessa College, earned a save after he closed out the game with three innings of one-hit relief.

Those newcomers backed Shugart, who was efficient over a 69-pitch performance that should keep him available to work later in the regional. Shugart struck out five Tigers over his six scoreless innings. For the first time since the season’s second week, he did not walk anyone in a start.

“I felt like tonight, I was myself all six innings,” Shugart said. “I was composed, I was pitching with emotion with that edge I usually have. I was in my rhythm. I was letting my defense work and I was also making pitches in counts I needed to make pitches in.”

Shugart allowed only four hits. Texas Southern entered the game with a .307 batting average that ranked ninth nationally. The Tigers were coming off an 18-run performance in the SWAC’s championship game.

“(Shugart) was throwing strikes,” said Tiger outfielder Kamren Dukes, whose team got one runner to second base. “I mean, he had no walks, so he usually throws strikes and that’s what got us.”

Texas advances to play Texas A&M at 6 p.m. on Saturday. The Aggies opened their stay in Austin with a 10-3 beating of Indiana.  Texas A&M recorded a 6-5 win over the Longhorns in College Station on April 10.

Texas coach David Pierce said junior Nolan Kingham, who has been battling a viral infection this week, will start against the Aggies. Kingham is 7-3 with a 4.26 ERA.

Around the bases: David Hamilton scored UT’s ninth run when he stole home in the fifth inning. It was UT’s first theft of home since Mark Payton accomplished the feat at Oklahoma State on March 25, 2011. … A second-inning single snapped an 0-for-17 skid for junior Tate Shaw, who also walked three times. … Wearing Texas gear, former Rice coach Wayne Graham was among the announced crowd of 6,914. Pierce worked for Graham in 1991 and from 2003-11. … Texas Southern (27-27) and Indiana (38-19) will meet in an elimination game at 1:30 p.m. on Saturday.