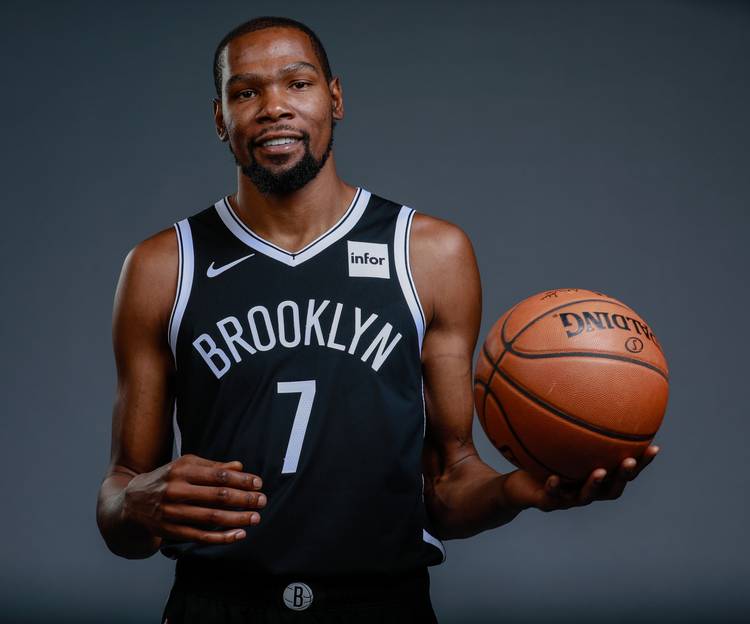 Over the past year, Kevin Durant has had to deal with a serious Achilles injury, a major career move from the Golden State Warriors to the Brooklyn Nets, and then contracted the coronavirus. If the NBA season resumes to play the playoffs, will he suit up? (Nicole Sweet/USA Today)

NEW YORK — By the time the NBA season resumes, it will have been about four months since video surfaced of Kevin Durant driving past Brooklyn Nets teammate Nic Claxton and elevating for a one-handed dunk.

He was well enough back then to participate in a 3-on-3 scrimmage, and history tells us that the 13 months following his Achilles surgery is plenty of time for recovery. Both Nets GM Sean Marks and Durant’s agent, Rich Kleiman, have said recently that Durant’s rehab is on schedule with no setbacks.

So it’s time to take off the bubble wrap for the Orlando bubble. After all, the Nets signed Durant for what the coronavirus left the NBA in 2020 — the playoffs.

To be clear, there are a few variables at play. A key to any Achilles rehab is the strength of the calf muscle, and we can only assume Durant was attacking that phase of his rehab with ferocity. He certainly looked strong when exploding to the hoop in March. The NBA has yet to finalize the return date or format, and it’s unclear if a resumption would also include regular-season games. But one scenario — an immediate re-seeding of the top-16 NBA teams regardless of conference — would offer Durant a first-round matchup against the Lakers. A showdown versus LeBron would be hard to pass up.

From both Durant and his buddy Kyrie Irving, we’ve heard plenty over the years about their love for the game and disdain for the NBA’s entertainment sideshows. They’ve left the impression they’d be much happier in a locked-up gym without fans or media or scrutiny.

A bubble in Orlando sounds perfect. It’s their chance to win a championship, free of the crowds, while skipping the regular season. And let’s be honest, the decisions to play lie with Durant and Irving, not with the Nets.

For those who are concerned about the health risk to Durant, consider the precedents:

These players had varying degrees of success after returning, but Durant is well beyond the time required and already fits into the “taken abundance of caution” category. There’s no guarantee for his health no matter how long he sits, and the breaking down of players like Brandon Jennings and DeMarcus Cousins, who both sat for an entire year after tearing their Achilles’, serves as a reminder that this is entirely unpredictable.

Time is not infinite for Durant. He’s 31 with about six or seven strong seasons remaining in his legs. Achilles tears aren’t always devastating, but Father Time is undefeated.

Although Durant hasn’t played a game for Brooklyn, this is already the first season of just a three-year window. That seemed to be acknowledged by Marks, who, when quizzed this month about whether Durant will play should the season resume, offhandedly answered, “that’s the $110 million question.”

Durant was signed for about $160 million. But subtracting the player option in year 4, you’re left with close to three years, $110 million. Durant, just like Irving, can become a free agent in 2022. History suggests they will.

The last time the Nets went into the playoffs with any real chance to win a title was almost 20 years ago. There’s no guarantee that it will happen again for another 20 years. For them and Durant, this is an opportunity that shouldn’t be wasted.