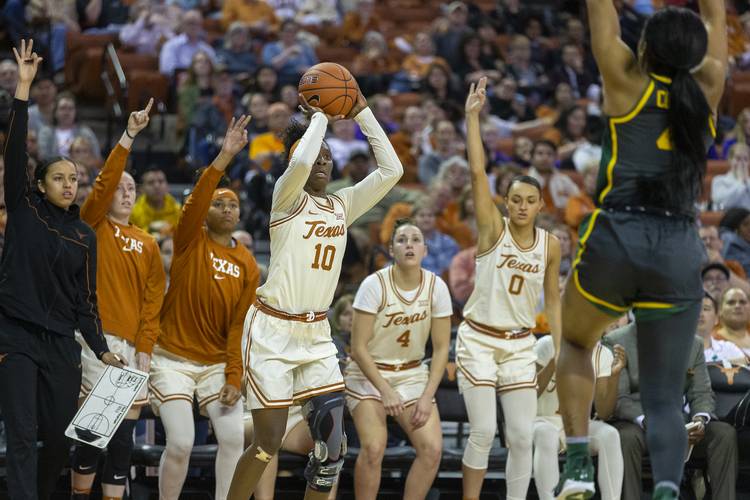 For those who purchased season tickets, that five-point triumph may have been worth the price of admission. But not all the dates on Texas’ 16-game home schedule have provided the diehards with a bang for their buck.

“Definitely, we had some very tough losses,” freshman guard Celeste Taylor said. “The Erwin Center is where we love to play. Obviously, we want to win every game that we can here at home for our fans and for each other and for the season.”

Those problems at home aren’t exclusive to Texas. Baylor, which has been ranked second in the country for the last seven weeks, is the only Big 12 school that hasn’t dropped at least three conference games in its own gym. TCU and Iowa State are 5-3 and 4-3 in conference games at home, but the Big 12’s other seven teams are .500 or worse.

Those Iowa State, Kansas State and TCU teams that beat Texas at the Erwin Center? Turnabout turned out to be fair play. Texas later picked up 81-75, 71-63 and 77-67 wins on their home courts.

“I think it’s crazy that so many of us have lost home games,” UT coach Karen Aston said. “That to me is the biggest reflection of the parity in the league and how tough it is this year. I’ve been in the league before where nobody lost at home.”

UT associate head coach Jamie Carey knows what her boss is talking about. She played at Texas from 2002-05, when the Longhorns went 24-0 at home vs. Big 12 teams. During that same span, they were 18-6 in road conference games.

“It’s a little bit of an anomaly this year,” Carey said. “I think it’s a lot of teams that are feeling some urgency right now and are trying to claw to be able to play together another day. We certainly showed that (at TCU) with the resiliency of our group.”

Wednesday night at TCU, Texas erased a nine-point halftime deficit by shooting 58% from the floor in the second half. Ranked ninth nationally in rebounding, Texas’ 57 boards fell just three shy of its season-high. Three players recorded double-doubles, and senior guard Sug Sutton nearly was the fourth with her eight points and 10 assists.

After the game, Aston implored her team to “please, please, please bottle this.” What exactly are the Longhorns bottling and shipping back from Fort Worth? Taylor says communication, energy and intensity.

“I think we see how well that worked for us, and I think that we’re going to keep it going,” she said.

Texas, in third place in the Big 12 standings, has three games left in the regular season. The Longhorns travel to Baylor on March 5, with bookend home games on Saturday against Oklahoma and Oklahoma State on March 8.

All-time, Texas is 18-9 at home against OU, with the Sooners’ last win in Austin coming in 2013. Statistically, Oklahoma possesses one of the nation’s top offenses (75.9 ppg). Only five teams have a worse-rated defense (76.5 ppg), however. The Sooners have dropped five straight games, but four of those losses were by four points or less.

“They play extremely hard, and certainly we know they’ll do that against us,” Carey said. “They’re playing pretty good basketball, just haven’t quite gotten over that hump. We’re expecting a very competitive game on Saturday.”

Texas rallies to top No. 25 TCU