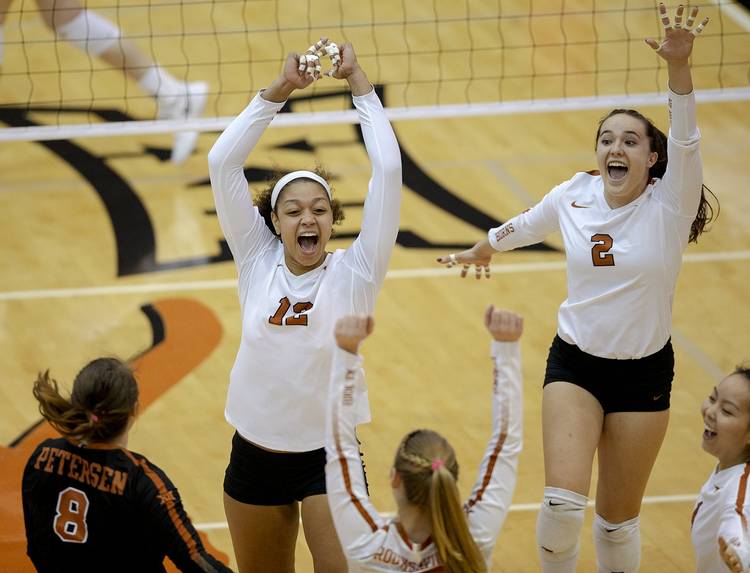 Texas' Morgan Johnson (12) and Jhenna Gabriel (2) celebrate a point during an NCAA volleyball game against Kansas State in Austin on Nov. 7, 2018. [NICK WAGNER/AMERICAN-STATESMAN]

The Texas volleyball team, led by its freshmen, has a fresh look as the Longhorns head to the end of the regular season.

Freshman setter Jhenna Gabriel’s 31 assists directed the offense Wednesday night at Gregory Gym as fifth-ranked Texas rolled to a 25-19, 25-15, 25-19 sweep of Kansas State at Gregory Gym. It was Texas’ 31st straight win over Kansas State. The Longhorns improved to 11-1 in Big 12 play. Texas (16-4) will host Kansas on Saturday, a rematch of its lone conference loss earlier this season.

Back on Sept. 19, the Longhorns needed a 19-17 win in the fifth set to escape their conference opener in Manhattan. Seven weeks later, they never trailed after a 9-8 deficit in the first set.

Advertisement
Gabriel, who came off the bench to lead Texas to a win over TCU last Wednesday, started at setter for the first time. Initially, UT coach Jerritt Elliott indicated that sophomore Ashley Shook, in her second season as starter, would resume setting after the Longhorns took a week off. But Elliott said Wednesday that Shook has continued to struggle  while Gabriel was impressive in practices.

“It’s a long season and a lot changes,” senior Morgan Johnson said. “A team changes probably two or three times in a matter of two months. I think that team that we played the first round against Kansas State, I think we’re a completely different team. You can see the strides that we’ve made.”

With Gabriel, Texas was given a showcase for its freshmen class. During key stretches Wednesday night, Gabriel played alongside fellow freshmen Sydney Petersen and Logan Eggleston as well as redshirt freshman Brionne Butler. Elliott said the freshman class, which also includes Katarina Luketic and Asjia O’Neal, is “definitely the deepest and most-talented group we’ve had across the board.”

Eggleston, an outside hitter, and Butler, a middle blocker, had six and five kills on Wednesday. Peterson recorded nine digs from her libero position. In addition to her assists, the 5-8 Gabriel also earned two kills.

“We need Ashley to be a great team. We’re going to need her,” Elliott said. “Sometimes it’s just good to let them sit back a little bit, relax and not overthink things. It doesn’t mean that we don’t have confidence in what Ashley can do, but Jhenna has stepped up and played a really nice game and has done a nice job and built some confidence among her teammates as well.”

Texas’ veterans also had a significant say in Wednesday’s sweep. Junior outside hitter Micaya White had a team-high 13 kills, nine digs and two aces. Johnson and fellow senior Yaazie Bedart-Ghani each hit at least .400 while combining for 15 kills. Junior Claire Hahn had 10 digs, which led the team.

“I give a huge thanks to the people around us, they really all make us feel confident in ourselves,” Petersen said. “That’s a huge part of being a freshman on the court. You’ve got to have a lot of confidence in yourself.”

Texas entered the night with a two-game lead over second-place Kansas in the Big 12 standings. Kansas (15-7, 8-3) was idle on Wednesday. The Jayhawks beat Texas in four sets last month. Texas has four matches left in the regular season. Kansas has five.