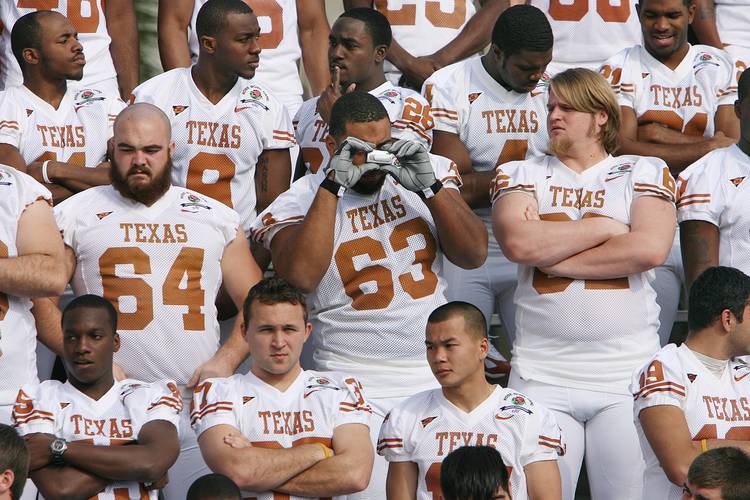 The carry officially marked Charles’ retirement from the NFL, closing a professional résumé that included the NFL career record for most yards per carry.

Charles’ retirement also closed one of the most significant chapters in Texas football history. He was the final Longhorn from the 2005 national championship team still playing football. In April, defensive end Brian Robison retired from the Vikings. He was the next-to-last Longhorn.

Players on the team that defeated USC in the Rose Bowl on Jan. 4, 2006 all have quit football. There were 21 eventual draft choices who played that season. Counting free agents, 32 players appeared in at least one NFL game, or more than one-third of the roster. There were five first-rounders.

Conversely, USC, which was trying to defend its national title, featured 11 draft picks in 2006. There still are 2005 Trojans in the NFL, including Oakland Raiders defensive end Frostee Rucker and Los Angeles Rams linebacker Clay Matthews.

“We didn’t have elite, elite players,” said former Texas safety Michael Huff, a unanimous All-American in 2005 and the Thorpe Award winner as the country’s top defensive back. “We had great college players and everybody did their job.”

This year’s NFL draft was front and center of the sports world’s attention last weekend as three different networks broadcast at least a chunk of the seven rounds.

The draft has evolved into a frenetic spectacle. There is the grind of the picks, from No. 1 Kyler Murray to No. 254 Caleb Wilson. There’s the non-stop analysis. And there’s the fan festival, with the draft site rotating from NFL city to city. Nashville played host to this year’s draft. More than 600,000 fans attended the massive three-day party that concluded with a concert from country star Dierks Bentley.

The draft was popular in April 2006, too. But not as ostentatious. The NFL invited a handful of the top prospects, including three of the Rose Bowl stars, to be on hand for the first round at New York’s Radio City Music Hall.

USC tailback Reggie Bush was the No. 2 pick. Texas quarterback Vince Young, with dozens of friends and family members cheering him on, was selected by Tennessee at No. 3, after team owner Bud Adams insisted that then coach Jeff Fisher select the Longhorns superstar. Trojans quarterback Matt Leinart spent an extended amount of time waiting in the draft’s green room. He fell to the Arizona Cardinals at No. 10.

Huff was home that night in Irving, watching with about six people. He said this week that his father told ESPN no when the network asked to show Huff waiting for his name to be called. The family wanted to celebrate the momentous achievement in private.

Oakland picked Huff at No. 7, making him the first Longhorns safety drafted in the top 10 since Stanley Richard in 1991.

Huff retired in 2013. He’s now assistant director of player personnel for Texas coach Tom Herman. It gives him time to watch his two young daughters. “The guys who played then, we’re all connected through our daughters now.”

After Huff, cornerback Cedric Griffin was a second-round choice by Minnesota. He retired after the 2012 season. Tight end David Thomas, a third-rounder for New England, played seven years. Offensive lineman Jonathan Scott, who was one of four All-Americans on the team, was picked in the fifth round by Detroit. He spent nine years in the league.

Defensive tackle Rod Wright, another consensus All-American, tumbled through the draft with no explanation. He’d been projected as a late first-rounder. He finally was selected in the seventh round at No. 226 by Miami. It was only then that Wright found out teams were concerned with a shoulder injury that Wright didn’t even know he had.

Thirteen years later, Wright still finds it uncomfortable to watch the draft. “For every happy player, there are 20, maybe more, who are just miserable,” he said.

Wright played three years in the NFL. His career was cut short by two bad shoulders. He finished his degree and was a grad assistant for former Texas coach Mack Brown. He’s coached at Sam Houston State and East Carolina. In February, he accepted a job at UTSA. Coincidentally, he’s the second Longhorns defensive linemen from that team who is a college coach. Frank Okam, a fifth-round pick in 2008 by Houston, coaches the Baylor defensive line.

The best draft year produced by the 2005 national champions was in 2007. That’s when seven Longhorns were taken, led by safety Michael Griffin (Tennessee) and cornerback Aaron Ross (New York Giants), who were back-to-back first rounders.

Both Griffin and Ross are retired and living in Austin. Griffin has a cupcake business and he and former Longhorn Brian Orakpo were featured in a national ad campaign for the Microsoft Surface Pro laptop.

Griffin was asked whether the national champions should have produced more picks. There were six schools that churned out more draft choices this season than Texas did in the 2006 draft. There is this caveat — none of the six won the national title. Clemson, the defending champions, produced six picks this year.

All but one player on the starting offensive line was drafted. Will Allen elected not to play pro football. But Justin Blalock (second round, 2007, Atlanta), Lyle Sendlein (free agent, Arizona) and Scott all had extended NFL careers. Sendlein wasn’t invited to the NFL combine, but played nine seasons in the NFL.

Blalock, who played for eight years, is headed to law school this fall. Studdard and his family live in Austin. He’s the host of two sports radio shows, one on hunting, one on football. His best NFL advice to college offensive linemen? “Dude, there’s nothing wrong with redshirting.”

The 2005 secondary could be the best in UT history. Among the top five there were three first-rounders, a second-rounder and a fifth-rounder along with two Thorpe winners. (Aaron Ross won it in 2006).

Overall, Texas still has the record for most draft picks in a single year. Back in 1984, when UT was months removed from an 11-1 season, 18 Longhorns were picked by NFL teams. There were 17 selected by the NFL in the main draft, which featured 12 rounds, but wasn’t heavy on supplemental picks, like today’s marathon. The 18th was Mike Ruether, who was picked in the USFL draft and signed by Los Angeles. The NFL conducted a special draft in June 1984 for USFL and Canadian Football League players under contract. The St. Louis Cardinals selected Ruether with the 17th overall pick.

Although the 2005 national champions produced a relatively modest six picks, Blalock said the group stood up well to everyone else.

“I feel like we presented UT really well,” Blalock said. “Most of the guys had success.”

A look at every national champion since Texas won the 2005 title, with that team’s number of players drafted in the ensuing NFL draft, including first-rounders:

No. 2-ranked Texas men sweep past Tennessee Tech in first round of NCAA tennis