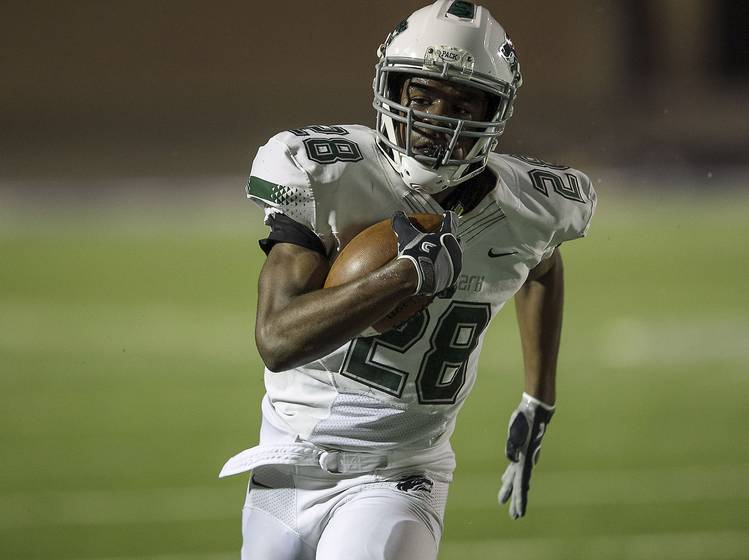 NOVEMBER 21, 2014: Cedar Park #28, Jav Guidry races to the end zone for a touchdown against Boerne Champion during the first half of the Class 5A, Division II area-round playoff held at Rattler Stadium in San Marcos, Texas, on Friday, November 21, 2014. (RODOLFO GONZALEZ / AMERICAN-STATESMAN)

Texas suffered a loss in recruiting when Vista Murrieta (Calif.) cornerback Jav Guidry chose Utah over the Longhorns. Guidry, a former Cedar Park athlete who was once committed to Herman at Houston, decided to stay west and continue his career in the PAC-12.

Herman will sign at least two cornerbacks in the 2017 class. He inherited the commitments of Josh Thompson and Kobe Boyce from Charlie Strong. Herman wants to add a third cornerback to the class and the staff must now return to the drawing board after failing to secure Guidry’s commitment for the second time in one cycle.

Guidry won a state title in football and track while at Cedar Park.

Cornerback isn’t in need of instant contributors in 2017. Herman’s staff should have plenty of talent at the position unit entering the season. In a pass-heavy Big 12 there is no such thing as too many cornerbacks, especially if Thompson or Boyce move to safety in college.

The options are thin with Guidry choosing Utah. Texas attempted to secure commitments from four-star prospects Chevin Calloway and Kary Vincent. Calloway is set to announce on national signing day with Arkansas in the lead. Vincent is committed to LSU.