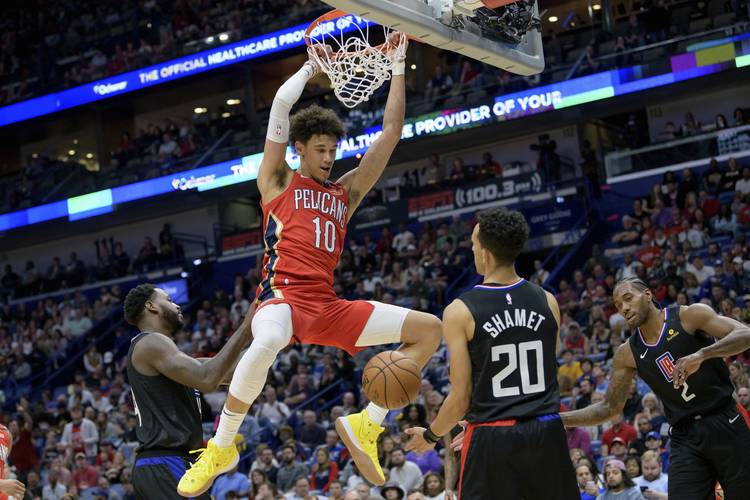 CLEVELAND — Brandon Ingram is all too familiar with the NBA growing pains associated with New Orleans Pelicans rookie Jaxson Hayes.

Talk on how can Hayes’ pencil-thin body (6-11, 220 pounds) holds up to the pounding in the paint against rugged veterans in the league remains in question.

Ingram, a forward for the Pelicans, heard the same chatter when he came on the scene four years ago.

“I can speak to that because I’m one of the smallest forwards in the league,” said Ingram, at 6-9 and 190 pounds. “I got tired of it and started doing something about it by using my quickness. Jaxson’s skinny right now, but he’ll use the summer to put on some weight and then the sky’s the limit for him.”

Despite his stature, Hayes has managed to make the most of his time and athletic body. He scored 19 points against Golden State in his debut. He scored 17 points and had a season-high five blocks against Phoenix last month. Hayes had a career-best 12 rebounds and four blocks against the Chicago Bulls earlier this month and followed that with a season-high 20 points against the Boston Celtics.

“I try my best whenever I get in,” said Hayes, a standout on last year’s Texas team, who averages 8.5 points and 4.5 rebounds. “I play my hardest and give the team my all.”

The Pelicans were not sure how much Hayes could give his rookie year. Before the Pelicans made Hayes the eighth overall pick in the 2019 NBA Draft, Pelicans general manager David Griffin studied the scouting report.

The report praised Hayes’ athleticism and willingness to not avoid contact because of his football background in high school. Griffin and Ingram were most impressed with his hands.

“He’s going to catch it wherever you put the ball near the rim because he has good hands,” Ingram said.

“So when you put that all together, for the total package, we felt like it was the greatest upside possible,” Griffin said. “And pairing him with Zion [Williamson] moving forward, would give us the most athletic frontcourt in the league.”

The lack of body weight, however, was enough of a concern that the Pelicans were prepared to sit Hayes and find time for him in the NBA G League – the NBA minor leagues.

The 2019-20 season began with injuries in the frontcourt that sidelined center Derrick Favors and forward Williamson. That left the Pelicans with no choice but to play Hayes, who averages just under 20 minutes per game.

“Our injury situation forced him into action much quicker than we anticipated, and he’s certainly responded really well,” Griffin said. “He’s not able to do much [physically] about it at the point of contact, but he’s willing. He’s not afraid.”

That lack of fear was developed as a wide receiver for three years with Moeller High School (Cincinnati), where Hayes graduated from. Jaxson’s father, Jonathan, played in the NFL and coaches the St. Louis BattleHawks of the XFL. That’s been an added boost.

“In football, I had to go up and make a catch and take hits, so I’m used to these hits in the NBA,” Jaxson Hayes said.

The Pelicans were a hit Tuesday night behind a 40-point first quarter that led to a 125-111 victory over the Cavaliers in Cleveland. Now that Favors and Williamson have returned, Hayes has seen a reduction in minutes but in 15 minutes he finished with eight points, two rebounds one assist and a block.

The game on Tuesday was also the first time Hayes’ siblings saw him in person as a pro.

“It felt like home because I came up here a lot as a kid and I dreamed of playing on this court,” Hayes said. “When we play the Pacers in Indianapolis [on Saturday] it’ll be an even bigger crowd [of support]. Close to 300 people are bussing over from [Moeller]. That’s going to be crazy.”