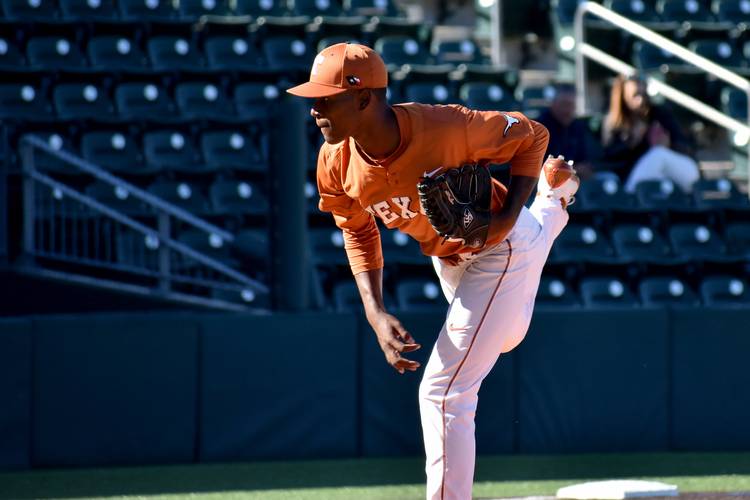 Fields, a freshman center fielder and pitcher, was among the noteworthy names in Texas’ Orange-White World Series that wrapped up Wednesday. Fields started three times in center for the Orange team, going 2 for 12 with three runs scored. He also pitched a two-out save on Sunday.

Focusing on baseball this fall is a new look for Fields, who starred as Garland Lakeview Centennial’s quarterback the last two years. He was considered a three-star quarterback prospect by 247Sports’ composite, and Iowa, Minnesota and Utah were among the schools that had offered him a football scholarship.

“Of course, I miss it,” Fields said. “If you ever see me warming up, I always throw a touchdown pass to one of my outfielders. I’ll always have a love for the game, whether I’m watching it or playing.”

Fields has played baseball since he was four, but he figured football would pave the path to his college education. The football programs who wanted to sign Fields, though, were hesitant to let him play two sports since he was being recruited as a quarterback.

Texas offered him a scholarship to play baseball, and “football never crossed my mind” when he visited the campus. UT secured a commitment from Fields, the cousin of former UT All-American sprinter Jerrika Chapple, ahead of his senior year.

Fields now finds himself in the mix to secure a spot in a Texas outfield that graduated Zane Gurwitz and lost Travis Jones and Patrick Mathis to the MLB amateur draft. Equipped with a fastball and slider, Fields also may log some innings on the mound.

Fields said he “would love to” walk onto UT’s football team. At worst, he and some of his baseball teammates could field one helluva intramural team; shortstop David Hamilton, pitcher Chase Shugart and catcher Michael McCann were all-district quarterbacks in high school, while outfielder Tate Shaw was a starting safety and punt returner at Westlake.

The night, though, was not perfect.

During the match, the NCAA selection committee released its initial rankings for the NCAA postseason tournament. Texas checked in at No. 7, which would make UT a clear-cut second seed if the NCAAs started today. That would allow the Longhorns to host their first two matches, but would likely be on the road for the tournament’s second weekend.

Here are the #NCAAVB Selection Committee's top 10 teams based on results through this past Sunday: https://t.co/iRwPeCb8cf pic.twitter.com/eTvWFs60WH

On its website, the committee said the rankings reflect “strength of schedule, Rating Percentage Index, head-to-head competition, results versus common opponents, significant wins and losses and locations of contests.” That criteria also is used to select the 64 teams that will play in the NCAA tournament.

Texas (18-2) is ranked third in the AVCA’s poll and sixth in the most-recent RPI rankings. UT’s two losses are to the fourth- and fifth-ranked teams in the AVCA poll. Texas’ biggest win at the moment, though, is over No. 12 Kansas.

Texas has six matches left. UT coach Jerritt Elliott said last week that Texas will likely need to win out if it wants a shot at a No. 1 seed. On Wednesday, the Longhorns found out they’ll also need other teams to lose a few matches as well.