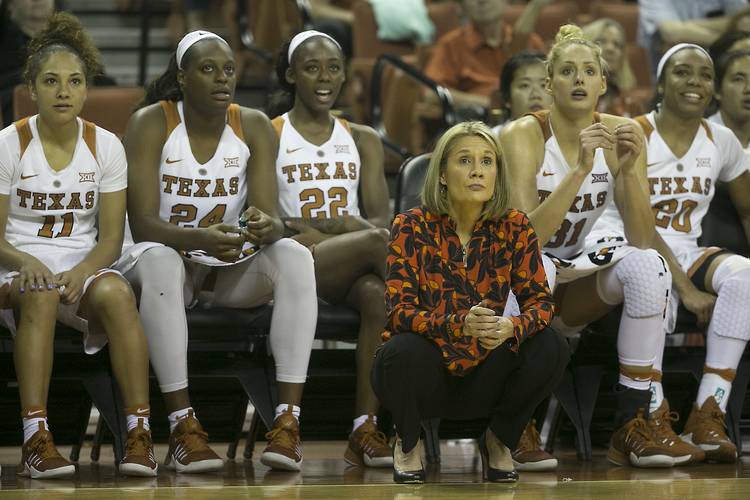 Karen Aston knew her young and inexperienced team might suffer growing pains when the Longhorns earned the No. 8 ranking in the Associated Press’ preseason Top 25 poll.

Now, after a pair of double-digit road losses against quality teams, the fifth-year Texas coach said her players have been “exposed.” Stanford shot 55 percent from the field in a 71-59 win to open the season, and Mississippi State shot 47.7 percent in Sunday’s 79-86 victory.

Yes, Texas has struggled on defense, Aston said, but the season is still young and full of possibilities.

“Yeah, maybe we were a little over-ranked, but I don’t think rankings mean anything now,” Aston said. “I would be discouraged if I didn’t think the future looks good or if I thought we were terrible and this isn’t fixable.”

No. 14 Texas (1-2) hopes to renew ties with the win column at home Wednesday against Northwestern State (3-0).

On Tuesday, Aston spoke about several subjects, including her team’s slow start and the continued search for leadership:

What are your early impressions of this year’s team?

I’m not surprised by the mistakes we’ve made, but I am surprised we haven’t overcome them better. That’s a sign of youth and immaturity. If you had asked me this a month ago, I would have said we’re an immature basketball team and one that wasn’t approaching everything as seriously as we are now that we’ve had a few losses.

Did you team know being ranked No. 8 might have been too high?

I think our older players knew. I don’t think they had any clouded vision of who we were. If you look at our starting lineup, every player has a new role this year except (center) Kelsey (Lang). It takes time to adjust to new roles.

The team was outscored 26-9 in the second quarter against Mississippi State, but you outscored them in the other three quarters. What happened in the second?

We looked extremely soft in the second quarter and got pushed around. They seemed surprised by the physical play and we didn’t respond to it very well. We gave up 11 offensive rebounds in the first half and maybe just four in the second half. We got shell-shocked with the physicality. … The challenge (in the second half) was what we’re going to do about it. Are we going to lay down and die and get beat by 30 or 40 points or are we going to respond? I think they did a good job of responding.

I know you’d like your older players to be leaders. Is that tough for them?

I’ve told Brooke (McCarty) and Kelsey, I need to hear your voice. I’m not talking about them getting on each other in the sense of being rude or mean. Young kids just need to learn, they need to be taught. They need to hear the voices of the older players.

Will you be working on specific things against Northwestern State?

They’re scoring 90 points a game. The competition level may not be as high as we’ve played, but the ball is still going through net. My biggest concern is just to get the win.