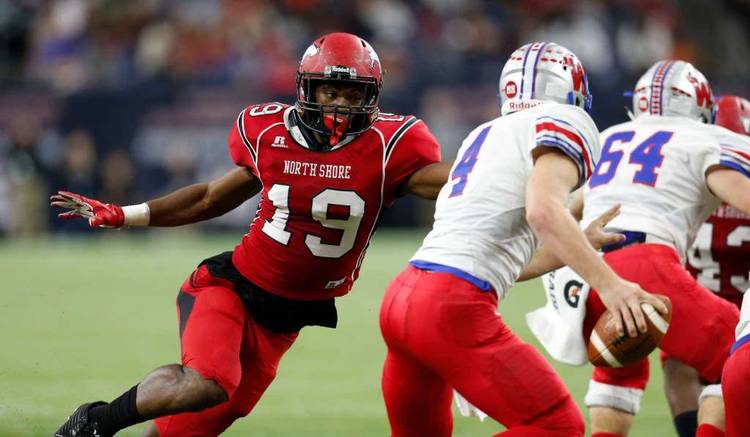 The four-star prospect was the highest-rated uncommitted player from the American-Statesman’s Fabulous 55 — and a top priority for Tom Herman’s staff.

“It came down to where I’m most comfortable with, and I’m happy where I am now,” Chaisson said after his announcement. “At the end of the day, you have to do what’s best for you. The (LSU) coaches know what they’re doing based on the past.”

Chaisson’s decision cements a disappointing cycle for schools inside the state of Texas. Only two of the top 10-rated recruits in the state signed with in-state schools — Plano East linebacker Anthony Hines (Texas A&M) and Frisco guard Jack Anderson (Texas Tech). The top six players in Texas are heading out of state for the first time in the 28-year history of the Fab 55.

Texarkana Liberty-Eylau defensive end Lagaryonn Carson was a one-time Texas commitment, but he’ll go through the junior college route. Houston Bellaire Episcopal defensive tackle Marvin Wilson, who’s No. 3 on our list but No. 1 on other recruiting lists, chose Florida State.

Chaisson, a 6-4, 220-pound defensive end, arrived on the recruiting scene late in his junior season. A multi-sack performance in a Class 6A Division I state championship over Westlake brought recruiting attention, stars and offers. He racked up 24 offers by the time he announced LSU on signing day.

North Shore failed to repeat its team success in Chaisson’s senior season. But he re-emerged as a rising prospect at the Under Armour All-American Game, where his stock rose after a three-sack performance. The composite four-star ranked No. 6 in the Fab 55 and was awarded a fifth star by 247Sports in its final update for this cycle.

His ability to pressure a quarterback made Chaisson a hot commodity. His versatility doesn’t hurt. Chaisson can play as a traditional defensive end in a 4-3 scheme or as a standup linebacker on the edge in an odd-man front. He’s also a candidate to contribute early after building a reputation on the prep level as a guy who plays his best against top competition.

Chaisson’s recruitment played out quietly. He isn’t overly active on social media. He doesn’t like doing interviews. He was a prospect of mystery to most. It’s about football for Chaisson, and his decision ultimately came down to the place he deemed brightest for his future.

“Not going to lie to you, Texas did have the lead,” he said Wednesday. “At the end of the day, I just feel more comfortable there at LSU. I trust (the coaches) and I know what they’re doing from the past. On the official visit (to LSU), I had so much fun there.”

Though he flirted with programs like Colorado, Chaisson’s recruitment was always a two-team race. LSU and Texas, both storied programs under new leadership, squared off in the first of many recruiting battles. Houston is a yearly hotbed for recruits and the two schools figure to cross paths numerous times in each recruiting cycle.

“Texas did everything great during the recruiting process,” Chaisson said. “They didn’t do anything wrong. It was just a gut decision and LSU was where I was comfortable.”

Texas’ 2017 class will fail to rank inside the top 20 in 247Sports’ team rankings for the first time this century. Texas signed two defensive ends. Temple’s Taquon Graham, a four-star recruit and No. 16 on the Fab 55, signed as did Fort Worth All Saints prospect Max Cummins. The duo will join a position group that includes Naashon Hughes, Breckyn Hager, Malcolm Roach and Erick Fowler. Snaps are up for grabs with the roster on an even playing field under a new staff.