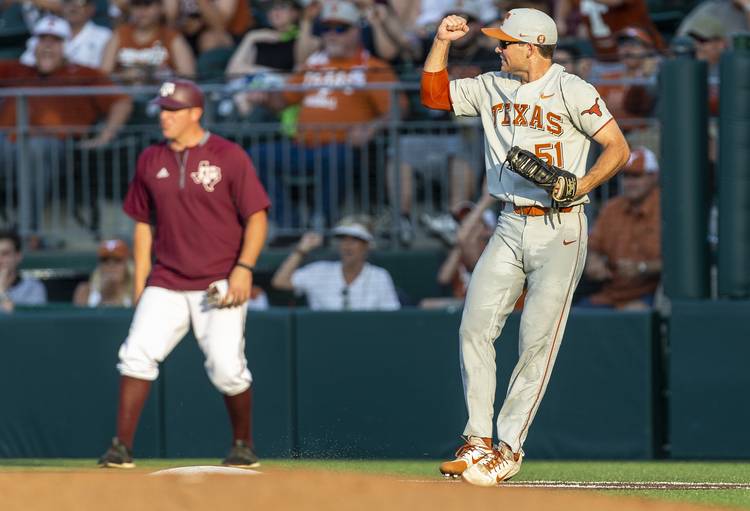 The dates have changed. As has the venue. The opponents are different, too.

One year later, however, the scenario remains the same for Texas’ Longhorns.

Behind Kody Clemens’ homers and Nolan Kingham’s health, Texas stormed to an 8-3 win over Texas A&M in an NCAA regional game at UFCU Disch-Falk Field on Saturday. With a 2-0 record in its regional, Texas controls its postseason fate. The Longhorns must win one more game in the double-elimination competition to advance to a super regional.

Texas found itself in a similar situation last year at Long Beach State. But after winning its first two games, UT saw its season ended by two straight losses to the host Dirtbags.

“We’re going to try to turn the page pretty quick, focus on tomorrow and not get too high on this one,” senior first baseman Jake McKenzie said. “We want to go get it done with tomorrow night. That’s the message to the team.”

Added Texas coach David Pierce: “They’ve been very reserved and understanding one pitch at a time, playing the inning and just continuing to play. They did that tonight and I expect that again tomorrow.”

Texas was designated as the visitor on Saturday, but Clemens homered at UFCU Disch-Falk Field for the 14th and 15th times this year.  A three-run shot in the first inning gave the season’s second-biggest crowd something to cheer about. His solo shot to lead off the sixth inning boosted Texas to an 8-1 lead.

With 21 this season, Clemens trails only Kyle Russell’s 28 homers in UT’s record books. All but one of his home runs have been hit in wins. He is 13-for-27 with four home runs, nine RBIs and eight runs in six games against Oklahoma and Texas A&M.

“He’s a baseball player, he loves the moment,”  Texas A&M coach Rob Childress said. “He did a great job for them tonight and certainly the difference in the game.”

While complimentary of Clemens, Childress called Kingham “the story of the night.” A 6-3 right-hander, Kingham allowed nine hits and two earned runs. He struck out eight Aggies while allowing one walk over 7 2/3 innings.

Kingham had been battling a viral infection throughout this week. He told Pierce on Thursday that he wasn’t sure if he could pitch on Friday, a day he usually starts on. Pierce had Blair Henley as a back-up plan if Kingham faltered against the Aggies, but the sophomore will instead start on Sunday night.

Kingham spent much of the week in bed, and McKenzie told reporters the pitcher threw up on Saturday morning. Kingham was able to take some medicine and drink fluids before the game. He then found ways to conserve energy throughout the evening.

“Body-wise, I felt great. It was just the flu,” Kingham said. “Body was fighting with me a little bit but you’ve got to push through it.”

On Sunday at 8 p.m., Texas will meet the winner of that afternoon’s elimination game featuring the Aggies (40-21) and Indiana (39-18). Texas A&M opened its regional with a 10-3 win over the Hoosiers.

If Texas loses on Sunday, the regional will be decided on Monday.

Around the bases: Texas improved to 244-126-5 in its all-time series with Texas A&M. UT has won three of the four meetings between the two schools in the NCAA tournament. … Texas sophomore Ryan Reynolds was hit by his 17th pitch, which is tied for the second-most in school history. … UT entered the day tied with Morehead State team for the third-most double plays in the NCAA. The Longhorns recorded their 66th and 67th double plays while the Eagles turned two once in a loss to St. John’s. … Each Longhorn in the batting order reached base on Saturday.