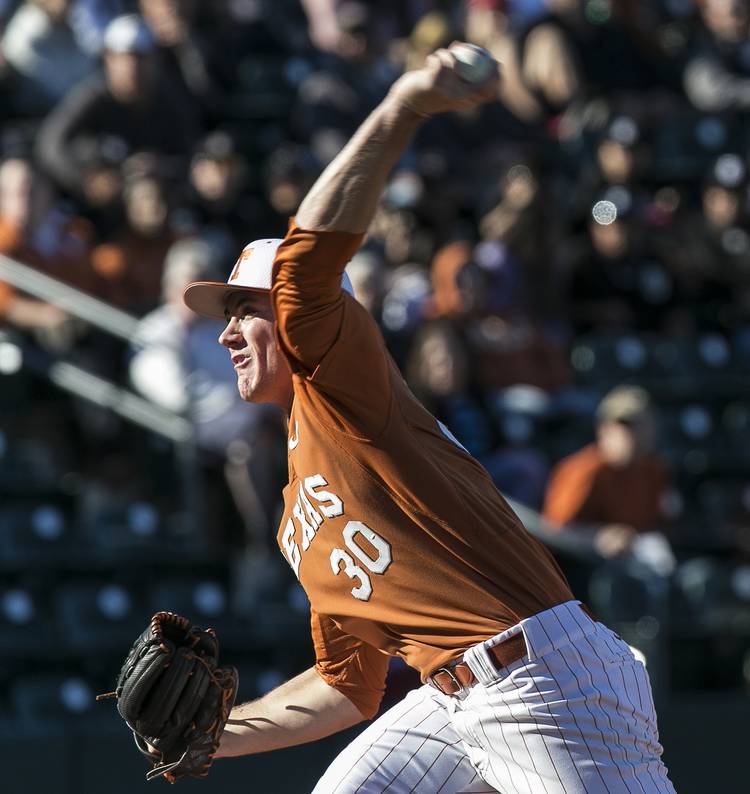 Bumped out of various roles on last season’s pitching staff, Texas left-hander Josh Sawyer is determined to have a bounceback year on the mound.

His first effort might not have counted, but it does matter.

Facing a lineup of big leaguers at Saturday’s alumni game, Sawyer threw four no-hit innings before being pulled in a 4-0 win for the current Longhorns. Among his six strikeout victims were Drew Stubbs, Brooks Marlow, Kevin Keyes and Ben Johnson, guys who did a whole bunch of hitting in their days playing at UFCU Disch-Falk Field.

“Location was really good today,” Sawyer said. “I threw a lot of fastballs for strikes.”

Sawyer is something of an enigma, employing stuff that is appealing to scouts but admittedly struggling with the mental side of things. At the team’s first practice Jan. 29, Sawyer said his struggles in 2015 were a function of a flawed approach in which “it was me versus the hitter and not me versus the ball.”

Of the 68 pitches he threw Saturday, 37 were for strikes, a ratio he wasn’t thrilled with. He got three outs on the ground and three more through the air, including a shot to center by Erich Weiss in the third inning. Other than walks to Stubbs and Johnson, Sawyer did not allow a baserunner.

Throughout the offseason, Sawyer worked to solve the issues that got him demoted from weekend starter to midweek starter and then to the bullpen, and he showed enough to regain his spot in the four-man rotation, according to head coach Augie Garrido.

“He’s got a really good arm and a good attitude at this point in time,” Garrido said. “I think he’s got confidence in himself, and we have confidence in him. He’s one of our four starters.”

Striking out Stubbs to open the game can only help build Sawyer’s confidence.

“I should have had him the second time,” Sawyer joked.

Sawyer, who was scheduled to exit after four innings, was followed on the mound by Ty Culbreth, who worked the final four innings of the eight-inning game to preserve the shutout. He gave up three hits and struck out three of the 13 batters he faced.

The Texas Exes left the game for good after the fifth inning, so Culbreth, who was credited with the save, faced a lineup consisting of his current teammates in innings six, seven and eight. His team’s no-hitter was broken up when Culbreth served up a single to James Barton, the first batter he faced.

Garrido, entering his 20th season as Texas’ coach and celebrating his 77th birthday, was mostly pleased with what he saw from his club at the plate. In the first inning, Michael Cantu, who will never be mistaken for a sprinter on the Longhorns track team, reached on an infield single, beating the throw of third baseman Brooks Marlow. That scored Zane Gurwitz, who got hit by a Taylor Jungmann fastball to open the game.

In the second inning, Kody Clemens ripped an offering from Andrew McKirahan to left for a leadoff double and then celebrated by doing the dab.

“Guys were dabbing through the fall,” Clemens said of the dance popularized by Carolina Panthers quarterback Cam Newton. “It was just a funny deal.”

Clemens, a heralded freshman from Houston, added a bases-loaded single in the seventh to score one run off of freshman lefty James Nittoli.

Interestingly, Clemens no longer appears ticketed for third base, where Garrido had pegged him just a week earlier. He is now floating between shortstop and second base, positions that had been called for, respectively, by Bret Boswell and Joe Baker. Neither Boswell nor Baker saw the field on Saturday.