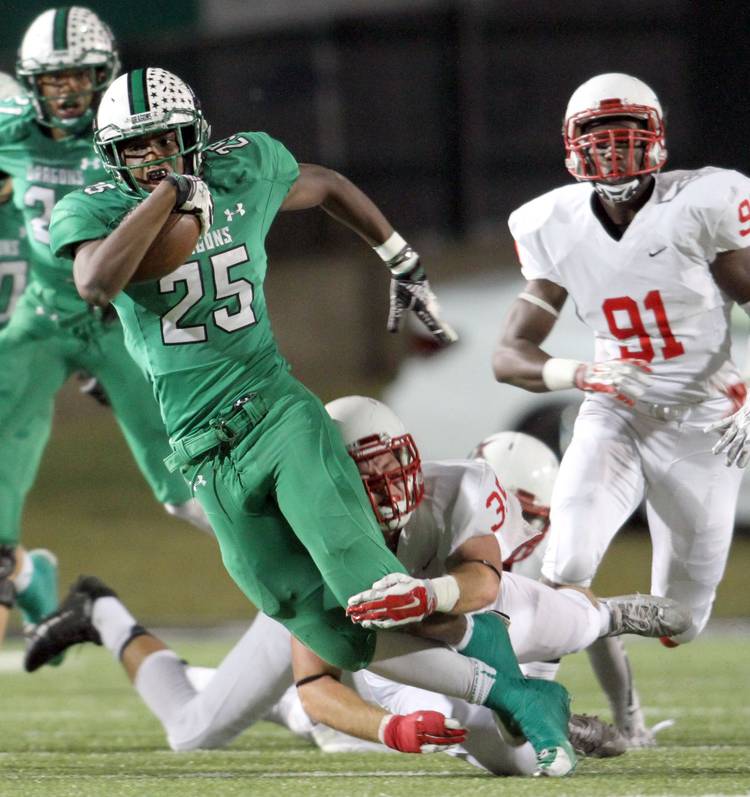 According to family folklore, Lil’Jordan’s oldest brother Terry wanted to name his new baby brother after a certain basketball superstar. No, Chevette Humphrey told him. She wasn’t naming her fourth child Michael Jordan.

“I guess she said ‘Little Jordan’ or ‘Lil’Jordan’ and it just stuck,” said Humphrey, the talented multi-sport athlete from Southlake Carroll who signed with Texas last month.

Lil’Jordan Maleak Humphrey, as his birth certificate states, discovered that bullies wanted to stick it to him. Heaven help any smack-talkers now.

“When I was younger, I tried to hide it a little more, because I wasn’t comfortable with it,” Humphrey said. “You always have people who try to make it a negative, make fun of your name. But as I got older, forget it. I’m just going to live my life and embrace it.”

Nicknamed “L.J.” around town, Humphrey embraced every aspect of the Southlake Carroll playbook during his high school career. A two-time all-state pick, Humphrey had 2,168 combined rushing and receiving yards and scored 22 touchdowns as a senior.

Carroll coach Hal Wasson said it was routine to have Humphrey take a handoff on first down, then line up out wide and run a go route on second down. Humphrey, having sprinted downfield, would then hustle back and take another handoff on third down.

Some recruiting services listed Humphrey as a running back. “Yes,” Wasson said.

Others said he was a receiver. “Yes.”

On signing day, Texas listed him as an athlete. “Yes.”

“I tell you what, Jordan is a unique combination,” Wasson said. “He’s a great blocker, great running back, great pass receiver, he even returned our kicks. Our offensive coordinator and offensive coaches did a fantastic job of putting him in position to tote the mail.”

A key cog for an offense that averaged 41.9 points per game, Humphrey sort of had to do it all. Some of these numbers are plain ridiculous. Let’s see, 284 yards on 20 touches against Midland Lee, 279 total yards against Abilene, 200 rushing yards alone against Colleyville Heritage … the list goes on.

His statistics and aura grew proportionally with his overall size. Humphrey was 5-feet, 8 inches tall as an eighth grader. Then he was 6-1 as a freshman, 6-3 as a sophomore and now 6-5.

“It was great for basketball,” Humphrey said. “I tried out for baseball as a freshman and got cut.”

Humphrey played basketball at Carroll throughout his prep career, too. Texas coach Charlie Strong went to one Carroll game and said, “I had to yell at him and tell him to shoot the ball.” But Humphrey sheepishly admitted he quit the basketball team right after signing day to protect himself for football.

Humphrey’s profile is the seventh in our series highlighting the Longhorns Class of 2016. To catch up on the rest of the series, here’s an interactive map of Texas’ recruiting class of 2016.

Look at all those statistics Humphrey generated at Carroll and see how that squares with Strong’s comments from Monday’s press conference setting up Texas’ spring football practices.

Asked about his receivers, Strong said, “We need a playmaker there. We’re talking about spreading this thing out. Whose hands are we going to get the ball in?”

Receivers John Burt, Ryan Newsome, Lorenzo Joe and Dorian Leonard all had multiple chances to catch the ball and make plays. Seems hard to believe the Longhorns won’t find a way to use Humphrey, whether in the slot to create mismatches or out wide against smaller corners.

Humphrey admitted one of his specialties was running wheel routes out of the backfield against usually slower linebackers.