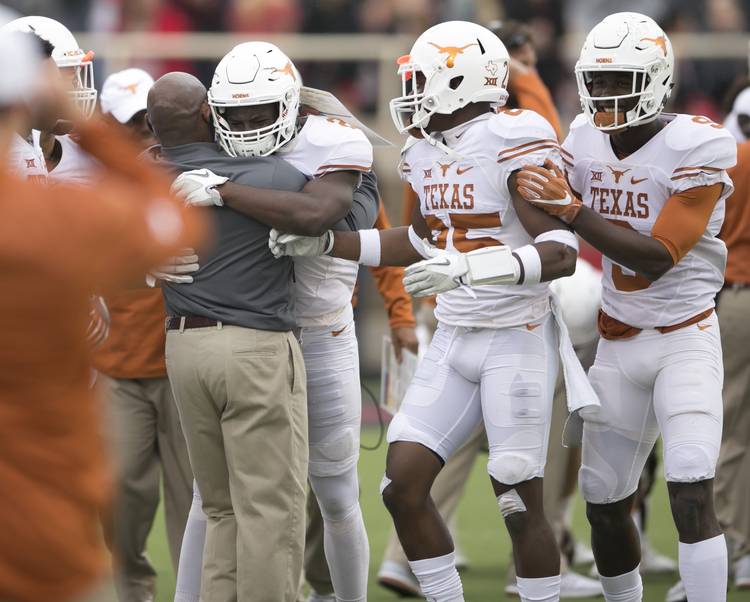 On Saturday, Texas athletes eulogized their football coach in 140 characters.

In the morning, Charlie Strong was fired after three seasons. He was 16-21 over three seasons with the Longhorns, and the team reached only one bowl game during his tenure.

The news of Strong’s removal was not well received in the Texas locker room. Players took to Twitter to express their opinions, which ranked from sadness to gratitude.

“This man gave me a shot when nobody else wanted me. Has helped me grow as a football player and a man. Don’t know where I would be w/o him,” receiver Dorian Leonard tweeted.

“It was a process and I enjoyed it! Can’t believe this is happening to you. Thank you for being a father figure,” linebacker Demarco Boyd opined.

“Wishing coach strong the best. Thanks for everything,” offensive lineman Connor Williams expressed.

Tweeted linebacker Malik Jefferson: “Words can’t describe how thankful I am to have played for you, you’ve set the foundation to something great and we have (to) finish it. #Thankyou.”

Even some of Strong’s former players had something to say. That included receiver Ryan Newsome, a member of Strong’s 2015 recruiting class who transferred to Arizona State this past summer.

Newsome wrote: “Never thought it was possible for Coach Strong to be at a place like Texas. As a young black man, It was so important for me to see him and watch him succeed at the pinnacle of college football. That’s why I signed to play for him at the last minute. It was about so much more to me. He taught me that a young black kid like me could be anything I wanted to be in life if I worked hard. And although I have moved on to a different program & university, I have no regrets of playing for him & I’ll remember it for the rest of my life. He taught me so much in not a lot of time. Thank you Coach, I can be anything I want to be in this life. Your time was so important to me.”

The reaction on Twitter was not especially shocking. Strong remained popular with his players throughout his three years, and the Longhorns celebrated their 2015 win over Oklahoma and a 2016 beating of Notre Dame by tossing Strong in the air. Five days before his firing, more than 50 players showed up at Strong’s weekly availability with the media.

“He doesn’t have the support, I guess, of some of the people who have been trying to get him out,” senior Jacorey Warrick said at the time. “The people who really matter — the players and stuff like that — you can see where our support lies.”

The in-house support, however, wasn’t enough to save Strong’s job.

Strong closed out his time at Texas with three straight losses, one of which was an inexcusable slip-up at Kansas. Texas, though, only started four seniors in a season-ending loss to TCU on Friday, and players expressed optimism that Strong would return alongside them in 2017.

“I hope (his future is) here, everybody does,” freshman quarterback Shane Buechele said after the TCU loss. “We’ve been blessed to have him, and no one wants him to leave. Everybody wants him to stay. We’re hoping he can be back for another year, just with these guys in here.”

One Twitter account that stayed silent in the immediate aftermath of Strong’s firing was the handle belonging to junior D’Onta Foreman. The running back became the second 2,000-yard rusher in school history on Friday, and remains a candidate for the Heisman Trophy.

Foreman told reporters on Friday that he had not yet decided if he will enter the NFL Draft, but that he was hoping to make his decision soon. Among the pros for coming back, Foreman listed his teammates and getting the program moving in a positive direction.

As for the cons?

“The cons would be coach Strong not being here, definitely,” Foreman said.

Less than seven hours after its firing of Strong, Texas announced the hire of Houston’s Tom Herman to be the Longhorns’ 30th football coach. News of Herman’s hire had leaked throughout the day, and a few Longhorns expressed optimism about the team’s future.

Said sophomore defensive back Kris Boyd: “Balls to the wall for Herman just as it was for coach Strong!”

Boyd, though, concluded that tweet with a hashtag coined by his now-former coach: #LetsRide.