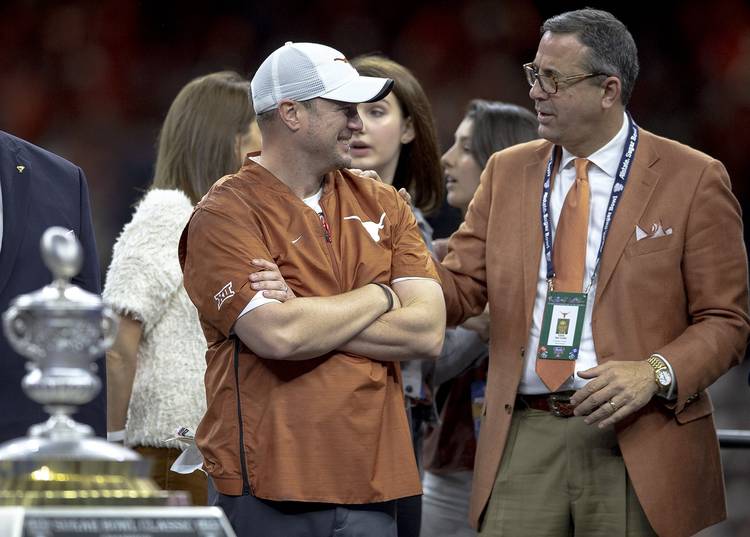 Texas officials froze season ticket prices for three seasons as the Longhorns plodded through mediocrity and a coaching change. After UT’s 10-win campaign in 2018 and Sugar Bowl victory, raising ticket prices seems like a fait accompli.

Del Conte announced Thursday at a town hall event that UT football season ticket prices would remain frozen for a fourth straight year even as the program’s trajectory tracks upward.

For 2019, there’s only one price for each seat whether fans have owned tickets since Darrell Royal, Roll Left, the Rose Bowls or the “Don’t Stop Believin’” game last November.

Mid-field seats in sections four or five will cost $4,050 each in 2019. That’s $550 for the actual ticket and $3,500 for the required donation component, although long-term fans have lower required donations or none at all. The lowest season ticket has an all-in price of $199.

Del Conte is raising the price of single-game tickets, though. The lowest priced ticket for the LSU game on Sept. 7 is $125. Other games are $40-$50 just to get in the door.

“I think everyone may look and say they won, let’s do it now. I’m the other way,” Del Conte said. He also announced that concession stand prices will be rolled back even more for 2019, too. A hamburger, fries and drink can all be had for $13.

“We won, we need you now,” he said. “Let’s reverse the psychology a little bit. Because we won, we increased ticket prices? It should because we won, we’re asking you to continue to celebrate our university and bring your friends with you.”

Del Conte made the announcement while speaking in front of about 400 people at the LBJ Auditorium on the UT campus. The event was free to the public, and Del Conte encouraged all fans to come ask him whatever they wanted straight to his face.

“I’m the athletic director of the University of Texas but really my job is to serve you all,” Del Conte said to kickstart things. “We’re only here because of your support.”

Del Conte went through a PowerPoint presentation that highlighted 2018. The department took in $219.2 million in revenue during the 2017-18 athletic year. Part of that came via fundraising; the Longhorn Foundation reported that 16,656 donors raised $41.4 million. That’s up from $37.4 million in 2017.

All 20 varsity teams had a cumulative grade point average of 3.0 or better, Del Conte said.

He outlined the massive construction projects that will unfold in the coming years. The south end zone expansion of Royal-Memorial Stadium will start in May. The new section will have 94 loge boxes ranging from $150,000 to $500,000 in cost. UT has already sold 82, he said. The project will also totally remake the football complex itself.

It’s worth noting that with the new stadium expansion, UT students will be moved back to the northeast corner for a few seasons, Del Conte said. Student seating will still be first-come, first-served.

An estimated $11 million will be spent on upgrading the plumbing to prevent “the bathrooms from exploding” as one did last year against USC. Del Conte acknowledged the stadium’s wifi capabilities aren’t great, either.

At one point, he showed the crowd a slide deck that highlighted every Power 5 school that’s pumped money into its football facility since 2007.

Baseball is getting a new workout facility, the school is set to build a new outdoor pool for swimming and diving, the softball stadium is getting a facelift and the new basketball arena is on the way. “If we demand excellence, which we do, then we’ve got to provide excellence,” Del Conte said.

Will Royal-Memorial Stadium ever go back to a natural grass playing surface? Said Del Conte: “What does (football coach) Tom Herman want? I’m a big proponent of it. It’s a topic of conversation. We’ll keep you posted.”

Will the Longhorns ever wear their road white uniforms at home as a special occasion? “There’s something special about burnt orange tops and those white bottoms when they come out. That is the Texas home uniform.”

Oh, and Texas will “never, ever” have black uniforms, he said.

Will Texas ever play Texas A&M again? Del Conte recounted how he called A&M’s Scott Woodward and asked to play during the 2022-23 seasons, and the Aggies declined, citing their contract with Miami. “That last game in College Station, who won that one? We did. They got to live with that,” Del Conte said.

Del Conte wants to make this town hall event a staple of his time as athletic director. He plans on hosting it every year in February, just before football season ticket prices are unveiled for the coming year.

“Well, I’m just trying to be transparent at the University of Texas,” Del Conte said. “I think a lot of times people think there’s something behind the curtain. What’s going on in the ol’ Bellmont Hall?

“I’d rather be transparent and say, ‘OK, guys, we’re live-streaming any question you may have and I’ll gladly answer.’ There’s no hidden secret,” he said. “If we’re going to try to ask people to support our athletic program, we should be as transparent as possible. You’re here to hold me accountable to everything I do, so I get it.”