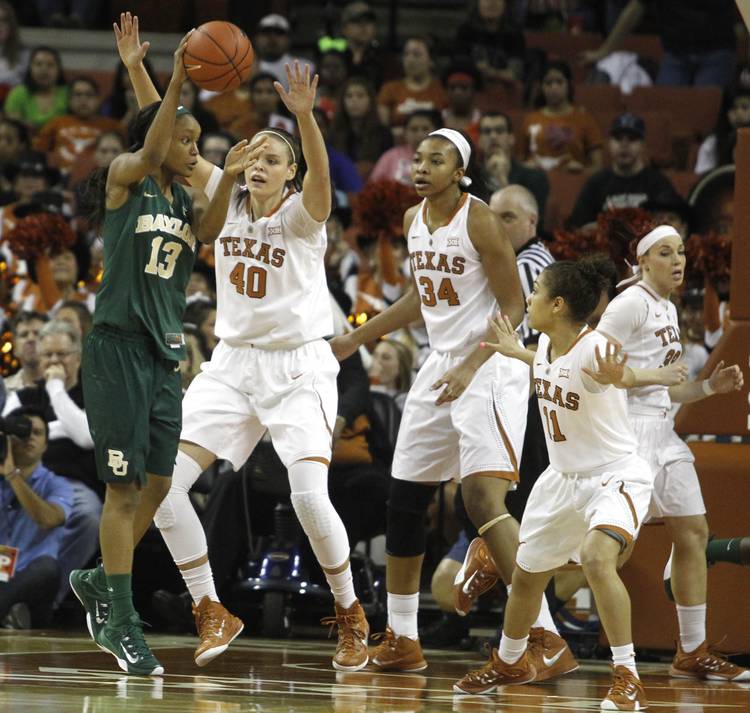 Beyond their rivalry and bad blood, Texas and Baylor hope to create a showcase for women’s basketball on Sunday afternoon at the Erwin Center.

Texas and Baylor rank fourth and sixth in the nation, respectively, and are a combined 33-1. A national TV audience will watch their Big 12 showdown, and the winner will have bragging rights — for at a month or so in any case.

“Everyone is asking whether we feel pressure,” said Karen Aston, the undefeated Longhorns’ coach, after a Friday practice. “I really think for the first time it’s exciting. You don’t feel anxious. You just feel excited about playing in the Erwin Center in a big game.”

“The way I look at it,” said Baylor coach Kim Mulkey, “that arena will probably be twice the size attendance as it normally is, and it’s because Baylor and Texas are playing and both are highly respected.”

Texas (16-0, 5-0) hopes to dethrone Baylor as the conference champ and take another step toward becoming an elite team nationally. Baylor (17-1, 4-1) owns an 11-game winning streak against the Longhorns, and the Lady Bears have won two NCAA championships during the past 11 years.

Adding spice to the matchup are comments Mukley made after Baylor beat Texas to win the Big 12 Tournament championship this past March in Dallas.

The Bears coach called Aston “classless” for keeping the Longhorns starters in the game during the closing minutes of an 11-point loss.

Earlier this week, both coaches sought to downplay the drama surrounding their teams’ most recent matchup.

Aston, perhaps gritting her teeth, said it was a “moot point,” adding that she was more concerned about “how I get my players to not only learn about basketball but about maturing into young women.

Said Mulkey: “(In) the heat of the battle, things happen, and that won’t play a factor in any of this. We have a new team, and that was … almost a year ago. We just have two quality teams in the Big 12, and I hope that it’ll be a good game for television.”

For Baylor this season, it’s been the Nina and Niya show. Forward Nina Davis, the Big 12 player of the year last season, has fared well against the Longhorns, averaging 20 points and eight rebounds in three Lady Bear victories. Point guard Niya Johnson, who leads the nation with an average of 10.4 assists per game, has per-game averages 13 points and eight assists against Texas.

“Niya is the heart of their team,” Atkins said. “She’s their motor. So we really have to focus on not letting her go off.”

Texas, meanwhile, looks up to 6-foot-7-inch Imani Boyette, who has averaged a double-double (15.4 points, 11 rebounds) in five Big 12 victories.

“(Boyette) has a sense of urgency,” Mulkey said. “It starts with her, and then I think the second thing is that their freshmen are growing up. They were thrown to the wolves and had to learn quickly. They’re hitting 3’s like they’ve never hit. When you win, it makes for good chemistry.”

A victory Sunday would go a long way toward helping the Longhorns attain one of their 2015-16 goals — winning the Big 12 title — but with 12 more conference games to go on the schedule, neither team is saying that a victory will guarantee a championship.

“We’re not ahead of ourselves in that aspect,” Aston said. “If I had to say one thing we’re looking ahead to, it’s winning our 1,000th game. Even then, I’m very cautious about talking about it. We’re trying to stay in the moment.

Texas has 997 victories all-time. If the Longhorns win their next two games — against Baylor on Sunday and at TCU on Wednesday — they would have a chance to hit 1,000 against visiting Oklahoma on Saturday.

For now, though, Baylor looms for the Longhorns.

“We have a special team, and I’ve been coaching long enough to see it and know what it looks like,” Aston said. “And when you know what good chemistry looks like, it slaps you in the face when you see it. This is a really fun team to watch play.”