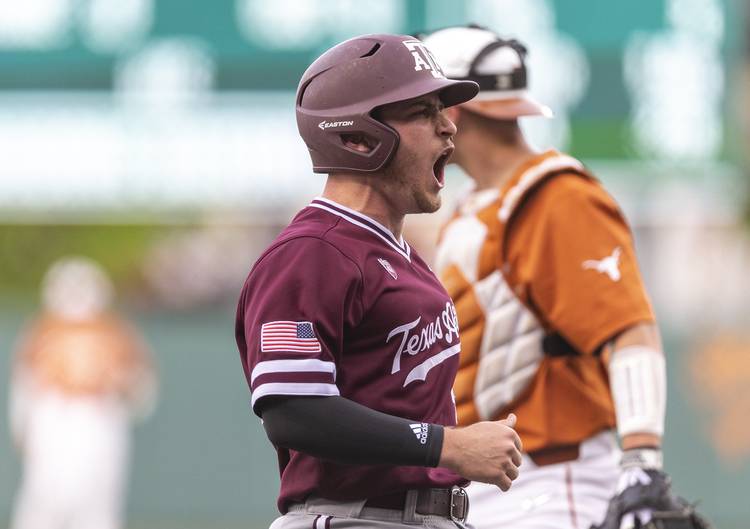 Down early, Texas was unable to catch up to Texas A&M in a 9-6 loss at UFCU Disch-Falk Field on Tuesday.

The three-run defeat snapped a three-game winning streak for Texas, which is 4-2 against teams from the Southeastern Conference this spring. Ranked 12th nationally, Texas dropped to 20-12 following the loss to the No. 9 Aggies (24-6-1). The Longhorns, though, didn’t have much time to sulk afterward.

“We don’t have any time to feel sorry for ourselves,” Pierce said. “We got beat tonight. We’ve got a couple days of practice and we’re on the road in the Big 12.”

Pierce noted that “the difference in the game is they’re more experienced than we are right now in some areas. Our young guys got exposed a little bit tonight.” Texas had two freshmen in its batting order on Tuesday. Five of the six pitchers who threw were either freshmen or sophomores.

Tuesday’s game was played in front of an announced crowd of 7,952, which was a regular-season record for UFCU Disch-Falk Field. Last year’s NCAA regional between the Longhorns and Aggies drew a crowd of 7,046.

Todd likened the crowd to a regional-like atmosphere. He added that “It’s definitely good for these guys to come out here and experience this and move on and build from it. Yeah, we lost, but they can gain so much more from this. It’s going to be OK.”

Texas trailed 7-1 after the Aggies batted in the sixth inning, but a Longhorn team that had walked off to wins in two of its previous three games made things interested. Senior Michael McCann hit a three-run bomb that pulled the Longhorns within 7-5. In the eighth inning, the Longhorns scored on an error but left the tying run at third base.

A clutch hit from Logan Foster, however, gave Texas A&M some breathing room in the final frame. Texas went down in order during its final at-bat.

The loss was UT’s fourth in nine midweek games this season. In 2018, Texas went 11-3 in regular-season games that weren’t tied to a weekend series. The Longhorns were 12-2 in those contests during Pierce’s first season in Austin.

Around the bases: With Texas down to one healthy catcher, redshirt freshman catcher Turner Gauntt rejoined the team ahead of Tuesday’s game. Gauntt was cut ahead of this season, but he takes the roster spot opened by Alec Carr’s preseason transfer. … Todd went 3-for-4 with two runs. Cam Blake, Todd’s ex-Round Rock High teammate, had two hits for Texas A&M. … Aggie closer Kasey Kalich earned this seventh save of the season. … Texas gave up 14 hits and four walks. The Longhorns committed two defensive errors for a third straight game.