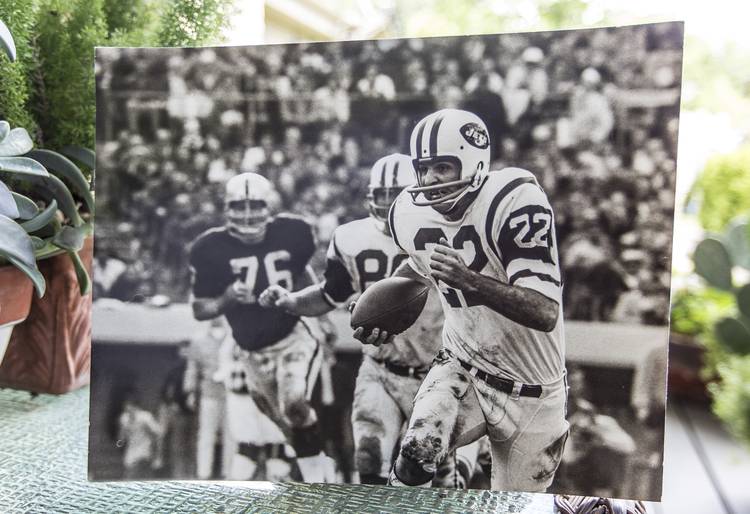 Jim Hudson, the former Texas football standout who starred on the New York Jets team that stunned the Baltimore Colts in Super Bowl III, died in 2013. He was one of four Longhorns who played for that Jets team. Only one of them is left --- 75-year-old Pete Lammons. [RICARDO B. BRAZZIELL/AMERICAN- STATESMAN]

Pete Lammons, the former Texas football standout and New York Jets tight end, acknowledged recently that he’s feeling more aches and pains than usual, but said that was mostly because he’d spent the previous chilly days fishing on the Toledo Bend Reservoir between Texas and Louisiana.

At 75 and after a seven-year pro career, Lammons still manages to get around.

Fifty Super Bowls ago, Lammons, John Elliott, George Sauer Jr. and Jim Hudson all were Longhorns that started for the Jets team that stunned the football world by upsetting the Baltimore Colts in Super Bowl III.

If that club weren’t exclusive enough, Lammons, Sauer and Hudson also played for the first UT team to win a national championship, capping the 1963 season by beating Navy and quarterback Roger Staubach in the Cotton Bowl.

Of those four Jets players, Lammons is the last Longhorn standing, the sole survivor.

Before the Longhorns celebrated the 50th anniversary of their 1963 championship, Lammons was struck by the toll the passing the years had taken on that squad.

“We could have held the reunion in a phone booth,” he said, later adding that he was exaggerating some.

When that 1968 Jets squad — still the only Jets team to win a Super Bowl — was honored last fall, about 30 players were on hand, Lammons said.

“It was a big deal,” Lammons said. “We realized it was probably the last time we’d all see each other.”

Super Bowl III was obviously the hot topic, but the former players also talked about concussions, which back in their playing days were dismissed as getting your bell rung. Lammons noted that no matter what the conversation, a few players had trouble following along.

“I guess that’s all part of the licks we took over the years,” Lammons said.

Hudson and Sauer succumbed to the head injuries and/or mental conditions that have now been linked to the epidemic of concussion-related problems in college and professional football. Most of the news about chronic traumatic encephalopathy (CTE) has centered on the dangers of pro football but, Lammons said, “Oh Lord. Mercy. We had a lot more hitting in college practices.”

Few teams were better at that skill than the Longhorns, who finished in the top five four times in the early 1960s and who followed their championship season by beating Joe Namath and No.1 Alabama in the Orange Bowl.

Another reason the Jets probably noticed so many players from a university more than 1,000 miles away was Sauer, an under-utilized receiver in Darrell Royal’s run-heavy offense. His father, a former college star for DX Bible at Nebraska and a former Green Bay Packer, happened to be personnel director of the Jets from 1962-69, when clubs in the upstart American Football League were desperate to find talent they could lure away from the NFL.

The Jets hit the jackpot with the quartet from Texas.

“All of us wound up being better in the pros than we were at Texas,” Lammons said. That paid off in the spades in the biggest game in Jets history.

In a largely defensive struggle in Super Bowl III, Sauer had eight receptions for 133 yards — more catches and yards than he had for the entire 1963 season at Texas.

Elliott, a seventh-round pick who eventually became an All-Pro, helped anchor a stout defense that held the vaunted Colts offense to seven points.

Safety Jim Hudson had the iconic play of Super Bowl II, one that captured Baltimore’s surprising ineptness and frustration. On a trick play, Colts receiver Jimmy Orr was so wide open that he turned around and started frantically waving for the ball and backing toward the end zone. An easy touchdown pass and the Colts would have survived the first half and been headed for the locker room tied 7-7. But Colts quarterback Earl Morrall never saw Orr, and instead tried to go underneath to a running back. Hudson stepped in for a momentum-killing interception.

In his post-football career, Hudson became a single-digit handicapper in golf. But one day his wife came home and found him watching the Golf Channel and clutching a golf ball. He was crying. He couldn’t remember what the ball was used for or how the game was played.

“Some of these guys (head injury victims) have a lot of anger. They hit their wives. He just suffered quietly,” said Bob Lederer, author of “Beyond Broadway Joe: The Super Bowl Team That Changed Football.”

In 2013 Hudson died from what was first diagnosed as Parkinson’s disease dementia, but was later discovered to be a very advanced case of CTE.

“Up until recently it was the most damaged brain they had seen,” Lederer said.

Earl Morrall, who died a year later, also had a similar initial cause of death listed until it was later found he had also had Stage Four CTE.

As for Sauer, while still in what should have been his prime, he walked away from football, turning his back on a sport he called “inhumanly brutal” among other things. He later worked a variety of jobs while laboring nights on a novel.

In 1972 he penned the introduction to “Meat on the Hoof,” a still controversial expose of the brutality of UT football. Two decades later, in 1994, Sauer wrote a poem after the death of his father, a victim of Alzheimer’s. Part of “Father” captured his sorrow and a premonition that he might suffer the same fate — “an old man dances in my mind his broken brain rattles mine.”

“He became something of a hermit,” Lammons said.

Sauer eventually died in 2013 from congestive heart failure. According to published reports, no one from his college or pro playing days attended his funeral.

After his playing days were over, Elliott returned to Texas. He died in 2010 after a battle with cancer.

This fall, while talking about his former Longhorns and Jets teammates, Lammons contemplated his own mortality and wryly observed, “Guess who’s coming to dinner? Me.”