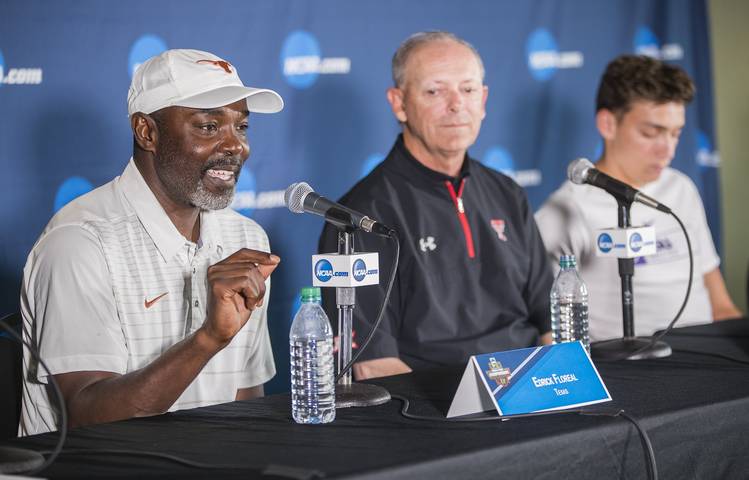 Typically this time of year, the college track world descends on Eugene, Ore., for the NCAA outdoor track and field championships.

A scenic backdrop, cool temperatures, a fast surface at the century-old Hayward Field? What’s not to love?

But Oregon officials withdrew from hosting for the next two years to launch a renovation project. Texas won the opportunity to host this event at Mike A. Myers Stadium for 2019 and 2020. And while this is only temporary, it could be a huge chance for Texas schools to boost their profiles in a state loaded with track talent.

The championships run Wednesday through Saturday with most finals scheduled for the 7-9 p.m. windows for television purposes.

“Oh, it’s a show. That’s all I can really say,” Texas senior Teahna Daniels said. “I feel like all the events on the women’s side are stacked. So it’s really anybody’s race. It’s definitely going to be a show.”

Arkansas women’s coach Lance Harter didn’t hold back, either. “It’s one of the greatest track meets in the United States, if not the world,” he said.

This could be a Lone Star-studded affair.

No. 1-ranked Texas Tech is an overwhelming favorite on the men’s side with a meet-high 19 qualifiers. Long-time coach Wes Kittley admitted Tuesday “this is the best team we’ve ever had in my 20 years there.”

Junior sprinter Divine Oduduru is worth admission alone. In Waco this season, he stormed through the 100 meters in a U.S.- and world-record 9.94 seconds. Then about 45 minutes later, he ran the 200 meters in 19.76, the second-fastest time ever by a collegiate athlete.

Oduduru and Andrew Hudson both qualified in the 100 and 200 meters, and they’re part of the 1600-meter relay team. Tech has Jonah Koech and Vincent Crisp going in the 800 meters, and Norman Grimes will compete in the 400-meter hurdles.

“We’ve been going to Eugene, and it’s a great venue there. But we love it being in Texas,” Kittley said. “A lot of our kids will have their families here. It makes it so much more fun.”

Texas A&M (fifth), Houston (seventh) and Texas (eighth) are all top-10-ranked teams with qualifiers. Baylor (24th) is sending Wil London, who will be making his fourth appearance at the NCAAs, this time in the 400 meters and part of the 1600 relay.

Holloway finished second in the 110 hurdles at the SEC championships, which left a bad taste. How’d that happen? Bad mechanics, bad everything. “If you go into real detail, we’d be here all day,” he said Tuesday.

“I think it’s probably the best place I’ve ever jumped — ever,” Duplantis said of UT’s facility. “The wind can catch, for sure. I don’t know. The runway, the box, just everything about it. For some reason, everybody gets on stiff poles and everybody just jumps really high here. Something about Texas.”

On the women’s side, it’s likely to be a battle between No. 1 Arkansas and No. 2 USC. The Razorbacks won the women’s title in 2016; the Trojans are the defending champs. Arkansas, which has 17 entries, is led by Janeek Brown, who has the second-fastest time this season in the 200 meters in 22.47 seconds. UT’s Daniels has the third-best time in 22.51.

Texas (13th) is the only other in-state women’s team in the current top-25 rankings. Daniels said the Longhorns are staying in a hotel, just like they would on the road, and treating this like a normal road meet.

“My mindset going into this championship, even though it’s at home, is that this is the moment you literally have been training for since last summer. For years, basically,” she said. “My mindset is just to treat it as any elite track meet. Just try your hardest, give as much as you can and fight to the finish.”

Texas track coach Edrick Floréal, who is finishing his first season, left Kentucky knowing the NCAA championships were coming to Austin. These next four days are huge for the Longhorns knowing this is a rare chance at hosting an event that could impact multiple recruiting cycles.

Now’s the time to put your fastest food forward.

“I think we went over and beyond just to make sure that everything is in tiptop shape and make sure the facilities are up to par and the kids can compete well,” Floréal said.